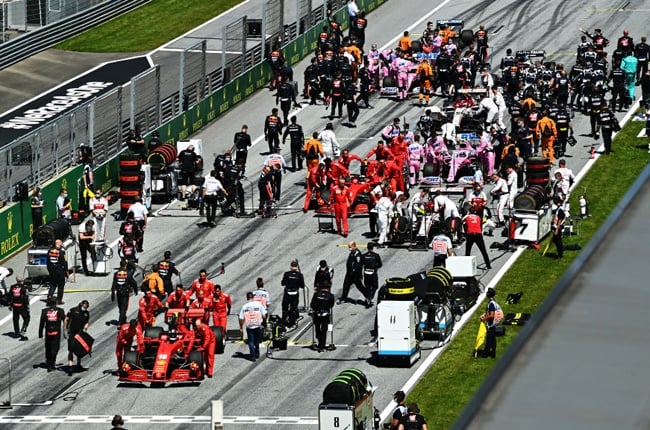 Formula 1 grid before the start of 2020 Austrian GP.
Clive Mason

• Four F1 teams are yet to confirm their driver lineup for 2021.

• Mercedes and Lewis Hamilton are yet to confirm a new contract.

Though there are still a few loose ends to tie up before the 2021 Formula 1 season is upon us, the biggest question mark hanging over next year is who will drive where. Six of the ten teams have confirmed their driver lineups, with the remaining four still to make their final decision. The biggest certainty, perhaps, is Lewis Hamilton resigning with his Mercedes-AMG team. The driver won his seventh championship last time out in Turkey, equaling the title record Michael Schumacher has held for the last 16 years.

Mercedes secured Valtteri Bottas' services for next year, but is certain that it can do so with Hamilton, too. With Mercedes then 99% certain to secure both its current drivers for next year, the remaining three teams to announce their drivers are Red Bull Racing, Haas, and Alpha Tauri. Who could go where?

Current Red Bull driver, Alex Albon, has been given until the end of the 2020 season to secure his 2021 racing seat, but he is not making good use of the opportunity and chances given to him by the team. All the signs are pointing towards the team not resigning Albon for next year, with Nico Hulkenberg and Sergio Perez in line to take up the seat. If Red Bull does decide to retain Albon for next year, despite his pathetic results, it will be the biggest shock in an already topsy-turvy season.

The Haas F1 team announced that both its current drivers will not race for the team next year. Instead, it is speculated that the team will sign two rookies - one of which is Schumacher's son, Mick. Schumacher is expected to be partnered by fellow Formula 2 driver Nikita Mazepin, who's father is rumoured to invest in the Haas team.

Alpha Tauri confirmed the services of Pierre Gasly, winner of the 2020 Italian GP, but is yet to announce their second driver. Daniil Kvyat will be ousted, with the team to bring in Honda-backed Yuki Tsunoda. Honda is the engine partner to Alpha Tauri and Red Bull Racing.

Session is halted after Alex Albon hits the barriers hard ??

We live in a world where facts and fiction get blurred
In times of uncertainty you need journalism you can trust. For 14 free days, you can have access to a world of in-depth analyses, investigative journalism, top opinions and a range of features. Journalism strengthens democracy. Invest in the future today. Thereafter you will be billed R75 per month. You can cancel anytime and if you cancel within 14 days you won't be billed.
Subscribe to News24
Related Links
Gauging Mick Schumacher's success: Haas could be stepping stone to greater things in F1
Patience is a virtue - Nico Hulkenberg 'waiting for a call' from Helmut Marko for a seat
F1 | The rise and fall of Alex Albon at Red Bull
Next on Wheels24
First Leclerc's watch in Italy, now Vettel's bag stolen in Barcelona