Why Ferrari's ills extend far beyond a dud car

• Calls demanding answers to Ferrari's downward trajectory in 2020 has erupted.

• The origins of Ferrari's troubled DNA are not solely ingrained in the SF1000.

Following Ferrari's humiliation of finishing the Belgian grand prix behind a customer car and scoring zero points, a groundswell of calls demanding answers to the team's near-vertical downward trajectory in 2020 has erupted. While at face value, the team's demise is down to a flawed design and aero philosophy, in truth, its fault lines run much deeper.

Although a significant loss of engine power following a technical directive by the FIA to clamp down on the fuel flow metering irregularities exhibited by Ferrari in the latter half of 2019 is a significant contributor to the team's current slump in form, it is not the least. Neither is the SF1000's inherent aerodynamic inefficiency that is forcing the team during setup to juggle the addition or reduction of downforce to combat drag, which is detrimental to either straight-line speed or tyre optimisation - as witnessed at Spa last weekend. Nor to blame is Ferrari's historical reliance on a powerful engine to compensate for an underdeveloped chassis, whose philosophy has not significantly evolved since 2017. Surplus power has allowed the team to set up their cars around the deficiencies of the chassis, but once that safety net disappeared, the inadequacies of both have been exposed in 2020.

Yet, the origins of Ferrari's troubled DNA are not solely ingrained in the SF1000 or even 2019's low-drag, low-downforce SF90, from which the former was evolved.

On Saturday, 21 July 2018, the Fiat Chrysler Alfa (FCA) board met in Turin to hurriedly hammer together a succession plan for the group CEO Sergio Marchionne, who, having overseen Fiat, Chrysler, Alfa Romeo, Ferrari and Maserati, had resigned for health reasons.

Some 477km north in Germany, Sebastian Vettel had just taken pole position for the Scuderia at Hockenheim. He was looking to extend his eight-point lead over Lewis Hamilton in the championship, who was starting from a lowly 14th after hitting technical trouble. Twenty-four hours later, what looked like a slam dunk Ferrari victory turned into an epic disaster. While leading, Vettel slid off the narrow and drying Sachs Curve and into the wall, handing Hamilton the victory as well as something Vettel would continue to cherish, but never hold in his career again: the championship lead.

Tortured by the nightmare memory a Ferrari F1 car crunched up against a wall to the sound of a sobbing Sebastian Vettel over the team radio, Sergio Marchionne breathed his last just three days later; his ashes a metaphor for the seeds of Ferrari's downfall.

The conflation of Marchionne's departure and Vettel's unseating continued to haunt the Scuderia, for it was around this time that its cycle of suffering started to compound: the remainder of the 2018 season was wasted away as Vettel only tasted success once more (at Spa, ironically); after that having his spirit broken by Hamilton who comfortably clinched the title at the third last race of the year. More misery followed with the false dawn of the SF90 as a championship challenger after emerging fastest from pre-season testing in February 2019, which was anything but; other than during Ferrari's brief rule-bending reign in the second half of the season.

The political powerhouse Marchionne - with his penchant for black knitwear, jeans and cigarettes - had taken the magic to his grave, leaving only atrophy in his wake. During his tenure, he was unmissable in the Ferrari garage and attended team technical meetings at the races. He spoke out on technical, driver (once calling the underperforming  Kimi Räikkönen a "laggard" not long before ensuring the Finn's departure from the team) and sporting matters; and fearlessly engaged rival team bosses as well as the FIA.

As the man who saved the Chrysler group and returned FCA to profitability, Marchionne's presence was felt at Ferrari's home base at Maranello in a way that none of his successors - chairman John Elkann and CEO Louis Camilleri have done; as evidenced by Mattia Binotto, Ferrari's current team principal's lack of direction. 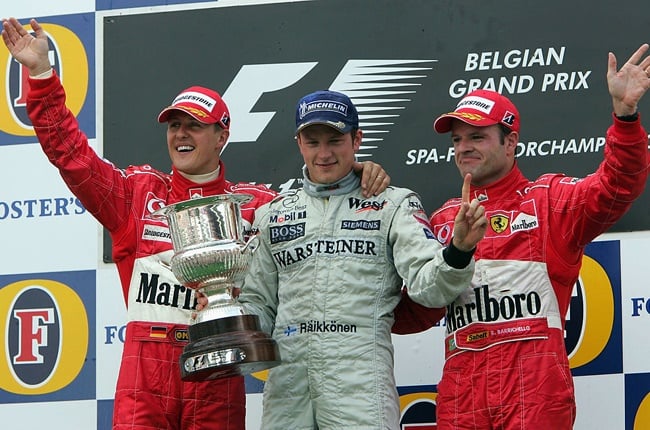 Still, Marchionne's excellence has not come without a cost. His flattening of management structures and insistence on internal promotions, dismissive attitude towards high-level experts (such as scoffing at the idea of head-hunting the much-needed genius of Red Bull's Adrian Newey; or the firing of James Allison (who, as technical director moved on to Mercedes, and was replaced by the bumbling Binotto in 2016) might have been admirable in rallying its troops, but has made the Ferrari organisation blind to its own shortcomings in equal measure. The failure of this approach is now evident as the team is out of ideas to salvage any performance from the dreadful SF1000.

While Ferrari has been here before, the sickly sense of déjà vu is scant consolation.

In 1980, Jody Scheckter suffered one of F1 history's worst title defences by raking in just two points against his championship-winning tally of 51 points of the previous year, teasing the Tifosi with a subsequent 20 year-long wait before Michael Schumacher finally brought the driver's crown back to Maranello in 2000.

As a midpoint, Alain Prost came achingly close to winning the 1990 title before Ayrton Senna railroaded him - and Ferrari's dream - off the track at the Suzuka title-decider. Like Vettel's in 2018, the aftermath was one of deep suffering, as the empty trophy cabinets that chronicle Ferrari's 1991-1995 campaigns bear testimony.

Maranello's last driver's title was won in 2007. Time may be the greatest healer, but no-one knows better than Ferrari that history also has a nasty way of repeating itself.

We live in a world where facts and fiction get blurred
In times of uncertainty you need journalism you can trust. For only R75 per month, you have access to a world of in-depth analyses, investigative journalism, top opinions and a range of features. Journalism strengthens democracy. Invest in the future today.
Subscribe to News24
Related Links
You’ll never guess who’s the most wanted person in F1 for 2021 – and it’s not a driver
Enzo Ferrari would have treated Sebastian Vettel better - Forghieri
Next on Wheels24
Verstappen predominantly at fault in Hamilton collision, gets 10-second penalty - FIA

Subscribe to newsletters
Lockdown For
DAYS
HRS
MINS
Brought to you by
Voting Booth
Who do you feel was at fault for Verstappen and Hamilton's Italian GP crash?
Please select an option Oops! Something went wrong, please try again later.
Verstappen
25% - 1456 votes
Hamilton
43% - 2487 votes
They were both at fault
32% - 1816 votes
Previous Results
Car Doctor
It may look pretty hot, but black cars are not that cool to maintain