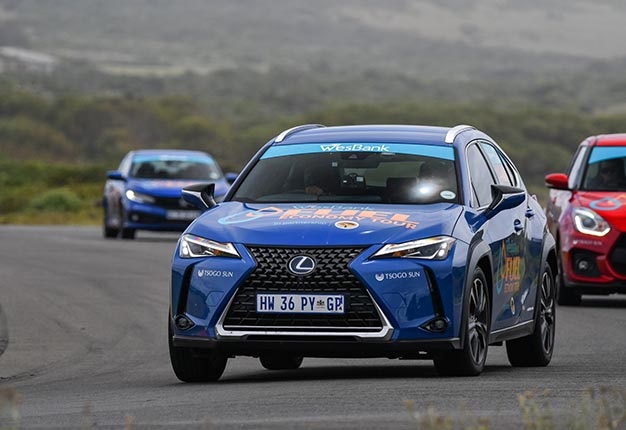 <i>Image: The route from East London to Port Elizabeth included a section of the famous East London race circuit, with the Lexus UX Hybrid being chased by a group of other Economy Tour cars</i>

The competition got really tight for the coveted best-performing brand award as well as in several of the classes in the inaugural WesBank SA Fuel Economy Tour in partnership with FNB as the five-day event ended its third day in Port Elizabeth yesterday.

Suzuki maintained its lead over Renault in the battle for the brand with the lowest combined average fuel consumption recorded for its best three vehicles, but it is nail-biting close, with Suzuki (Ignis, Swift and Baleno) on 5.1905l/100km and Renault (Captur, Duster, Kwid Climber) on 5.2088 l/100km.

The fight for honours in the well-supported category for double cab diesel bakkies with engines smaller than 2.5-litres, is particularly tight with the Ford Ranger just edging out the Mitsubishi Triton, Toyota Hilux, and the Nissan Navara at the end of three days of competition.

Part of the route on Day 3 of the #WesBankFuelEconomyTour in partnership with @FNBSA takes on the stunning Van Staden’s Pass. While it makes for a great photographic backdrop, the twisty climbs are tricky to negotiate when it comes to fuel economy. pic.twitter.com/6iVTYFFpKz

Five vehicles in the field of 40 were penalised for late arrival at control points yesterday, compared to none on the first day and six on Day 2. Image: The class-leading Suzuki Vitara with Port Elizabeth in the background

The best fuel consumption for Day 3 was achieved by the Toyota Aygo, which is now in second place on cumulative consumption, of 4.8909l/100km. This is very close to the class leading Renault Captur, with a figure of 4.8247l/100km after three days.

Currently Suzuki still has its hold on six of the classes, with Ford, Hyundai, Renault, and Toyota each topping two classes, while Honda, Mahindra, and Lexus each lead one class.

Image: The route from East London to Port Elizabeth, with the Lexus UX Hybrid being chased by a group of other Economy Tour cars

The route for Day 3 of the 2 500km Fuel Economy Tour was only 370km in length, but contained several city driving sections as well as long sections on a single lane road which made overtaking difficult as there were many periods of solid lines. There were a few climbs and twisty sections after the demanding Day 2, which had really put the pressure on the drivers and navigators.

The fourth day takes the vehicles from Port Elizabeth to George, with the fifth leg ending in the Cape Town CBD on Saturday afternoon.

We live in a world where facts and fiction get blurred
In times of uncertainty you need journalism you can trust. For only R75 per month, you have access to a world of in-depth analyses, investigative journalism, top opinions and a range of features. Journalism strengthens democracy. Invest in the future today.
Subscribe to News24
Related Links
Soaring petrol prices in SA: Here are a few fuel-saving tips
Here are 10 sure fire fuel-saving tips to try to save cash as the latest petrol price hikes cut...
Next on Wheels24
Who said women don't drive bakkies? These celebs highlight the 'RangeHer' fuel efficiency