• Toyota took victory at one of the opening three races of the 2020 GTC season.

• Michael van Rooyen took victory for Toyota in the last race of the day.

The opening weekend to the 2020 Global Touring Car (GTC) season began on Friday (25 September) with practice sessions, followed by qualifying and the three races on Saturday. Toyota's Van Rooyen was on the pace the entire weekend but had to settle for third place in qualifying, behind the two factory Volkswagen Golf 8 GTIs. Van Rooyen was half a second off pole position. How it played out

When the flag dropped for the first race of the season, Van Rooyen made a good start and endeavoured to stick close to the two cars ahead of him, while fending off an assault from Robert Wolk (GTC Toyota Corolla), who started in fourth on the grid.

Just two laps into the race, Van Rooyen encountered a problem with the left rear tyre on his car, and even though he was able to continue racing, his pace started dropping off. This allowed Wolk through, but only temporarily, as he suffered a puncture a few laps later and had to retire, handing third place back to Van Rooyen, who held onto that position until the chequered flag.

READ: Volkswagen's Golf 8 GTI races to victory on its debut at opening-round of 2020 GTC Series

Race 2 saw more tyre drama for Van Rooyen, as the left-front tyre lost its tread after just two laps. Van Rooyen, who was in second place at the time - having moved up from third on the grid - managed to keep a hard-charging Wolk behind him for the bulk of the race.

However, on lap 6, the lack of front-end grip saw Van Rooyen spin under braking at the end of the back straight, while doing more than 200km/h. The Corolla driver recovered quickly and managed to hold onto fourth place at the chequered flag.

There was massive disappointment for Mandla Mdakane in Race 2, when his car suffered a misfire on the way to the starting grid. He was forced to return to the pits and couldn't start the race. The issue resurfaced during the formation lap for Race 3, but Mdakane managed to coax the car onto the grid, and started the race in third position, thanks to the reverse-grid system employed by the GTC series. 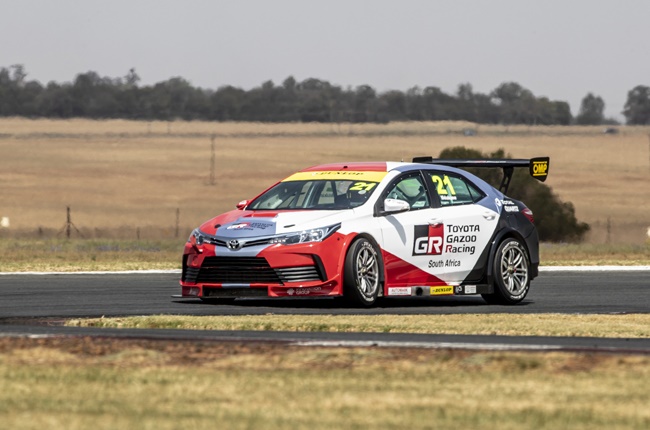 Final race of the day

While Mdakane had his problems, Van Rooyen started the final race of the day in fourth place, but would soon find himself in second place - behind team mate Wolk. While Van Rooyen sought a way past the Corolla ahead of him, Keagan Masters, in one of the factory VW Golfs, managed to get ahead of Van Rooyen, but the Rustenburg Rocket fought back and reclaimed second place. Wolk had used the opportunity to open a commanding lead, but Van Rooyen had other ideas.

It took two laps for the TGRSA driver to catch up with Wolk again, leaving just the final lap to challenge for the victory. Van Rooyen kept his cool, and bided his time - eventually pouncing just two corners from the finish, to take his first victory of the season, and to record a first win for the all-new GTC Toyota Corolla.

Van Rooyen said: "Overall, it was a good start to the season, and we are happy that our new Corolla is clearly highly competitive. With that said, we do have some work to do for Port Elizabeth, in order to make sure that we can challenge for more race wins."

The second round of the GTC Series is at the Aldo Scribante circuit in PE, with the race set for the weekend of 30 and 31 October 2020. We live in a world where facts and fiction get blurred
In times of uncertainty you need journalism you can trust. For only R75 per month, you have access to a world of in-depth analyses, investigative journalism, top opinions and a range of features. Journalism strengthens democracy. Invest in the future today.
Subscribe to News24
Related Links
Volkswagen's Golf 8 GTI races to victory on its debut at opening-round of 2020 GTC Series
Toyota reveals its 'Corolla sedan' race car that'll compete in 2020 GTC season
Next on Wheels24
UPDATE | Postponed historic Kyalami 9 Hour gets new 2022 dates