Although the overall title as well as the various class championship titles in the Production Vehicle category of the 2019 South African National Cross Country Series (SACCS) have been settled, the rest of the podium positions as well as the final standings can still change and will only be finalised at the Parys 400 on 1 and 2 November.

This event will form the sixth and final round of the SACCS season and lots of racing action can be expected in the battle for the last points of the season.

Henk Lategan and Brett Cummings (Toyota Gazoo Racing SA Hilux) are the overall and FIA Class champions with Lategan the youngest driver to claim this title.

Cummings, who is a double Dakar Rally motorcycle contender, took his place in the navigator seat for the first time at the opening round in Dullstroom.

They would like nothing better than to claim a fourth race victory this year, but their team-mate, Giniel de Villiers, who will be competing with Spanish navigator Alex Haro in preparation for the 2020 Dakar Rally, would also like to round off his season with a third win.

De Villiers/Haro recently won the Morocco Rally. Although Dennis Murphy will not be reading any notes at Parys, he still stands a good chance to keep his current podium positions.

If the cards fall right for De Villiers at Parys, he can push past the newly crowned Class T champions Lance Woolridge and Ward Huxtable (Ford Castrol Cross Country Ranger) on the overall standings to finish as the runner-up.

The Ford team are currently second with five points the difference and they would like to keep this status quo. This scenario sets the stage for an exciting three-way battle and interesting race tactics.

Places up for grabs

Both teams are also capable of victory and it would be a perfect way to end their seasons. There will be three Red-Lined Motorsport Nissan Navaras on the start line in the FIA Class with Ernest Roberts/Henry Kohne hoping to finish the season on the same high note they started while Terence Marsh will again team up with Letshego Zulu who will read the notes.

Zulu has also recently taken up her business chair in Red-Lined Media and Marketing and has navigated for Marsh on numerous occasions in the past including earlier this year at the Berg 400.

A last helping of points will be perfect for Johan van Staden/Mike Lawrenson (Elf Renault Duster) in the FIA Class while Clint Weston has teamed up with Elvene Vonk in the King Price Extreme for the Parys 400.

Vonk sat next to Schalk Burger during the season in preparation for their 2020 Dakar Rally attempt, but Burger was recently injured during their final practice session in Namibia.

The German driver, Daniel Schröder, will also be visiting South Africa and has again teamed up with Ryan Bland from KwaZulu-Natal in the PS Laser Nissan Navara prepared by WCT Engineering while the Brazilian team of Marcos Baumgart and Kleber Cincea (Ford Castrol Cross Country Ranger) will be Woolridge/Huxtable’s team-mates in Class T.

In Class T Johan Horn (Malalane Toyota Hilux) will have Leander Pienaar reading the notes, as brother Werner will be in Japan, and an interesting ding-dong battle can be expected between them and Jacques van Tonder/Nico Swartz (Ford Ranger) as the podium and final standings could look different after the Parys 400.

Gary Bertholdt/Geoff Minnitt (Atlas Copco Hilux) can never be left out of the equation and a good result and a healthy haul of points will be the ideal way to round off the season.

Wors Prinsloo/André Vermeulen (Ford Ranger) as well as Dylan Venter/Donavan Lubbe (4x4 Mega World ARB Toyota Hilux) will hope for an uneventful race as will Richard Leeke and Zaheer Bodhanya who are back in Class T after their recent podium finish in the FIA Class at Lichtenburg.

In Class S, David Huddy and Gerhard Schutte (Hud Racing Nissan Navara) have successfully defended their title and a hundred percent finish rate will round off their perfect season. The Parys Airfield is where action will meet entertainment on Friday and Saturday, 1 and 2 November.

Race Headquarters, the Designated Service Park (DSP) and the Spectator Stadium stage will be situated here. Teams will complete documentation and vehicle scrutineering on Friday morning at the airfield with the 45km Qualifying Race starting at 13:00.

The Qualifying Race will determine the starting positions for Saturday when the leading team will open the road at 08:00. On Saturday, a 170km loop awaits competitors who will have to complete it twice.

There will be a compulsory 30 minute service halt at DSP after the first loop and the race will restart at 12:00. Spectators can enjoy the racing action at the Stadium Stage and various vantage points along the route.

Cross country followers can also follow the action on their mobile devices by downloading the RallySafe App. Route information, daily results and news will be available on the RallySafe App during the event.

We live in a world where facts and fiction get blurred
In times of uncertainty you need journalism you can trust. For only R75 per month, you have access to a world of in-depth analyses, investigative journalism, top opinions and a range of features. Journalism strengthens democracy. Invest in the future today.
Subscribe to News24
Next on Wheels24
Binder brothers back home in SA and ready for grueling mountain bike race in KZN 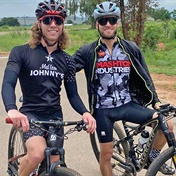