'Once you're behind the wheel it doesn’t matter who you're racing against' - SA's Kaylan Miller speaks on cars, motorsport and changing perceptions Born and raised in the hustle and bustle of Johannesburg, Kalyn Miller was captivated by the rush of speed, cars and the desire to get behind the wheel from an early age.

Now, at the age of 25, this young lady is not only participating in a male-dominated sport, but she’s competing with them too, and is hot on their heels.

Kalyn’s father, Kevin, has been involved in the motor racing industry for over 40 years. He’s also been Kalyn’s role model and her hero since she was in nappies.

As a toddler, her mother Lynne, took Kalyn with her to the track when her dad was racing, it was here that Kalyn first fell in love with the sport and her passion for cars began. 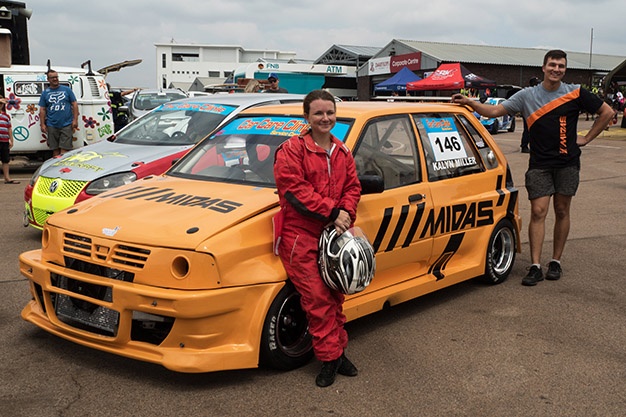 In 2009, at the tender age of 15, Kalyn participated in her first race at the Midvaal raceway in the Development Series. The vehicle she raced in wasn’t just any vehicle, she raced in a bakkie that she helped build from scratch, from sanding and stripping paint, to helping with the motor build and setup. Then in 2017, she participated in her first championship, where she took the title, a highlight she will never forget.

"Motor racing is a male dominant sport and I had to stand my ground and earn my right to a place among 'the guys'. It was intimidating at first, but, once you are behind the wheel it doesn’t matter who you are racing against all you are worried about is keeping them behind you!" says Miller.

Kalyn believes men and women should be given equal opportunities; one shouldn’t be stereotyped according to their gender. Working two jobs to finance her racing, she dreams of having the opportunity of competing overseas as the sport has gained a lot of popularity with females in the international market.

When she’s not hanging out with 'the guys', or on the track, she enjoys treating herself to some 'me-time,' which includes a good massage or having her nails done. Kalyn has entered 2019 in class A in a 1600cc turbo charged car and is competing against well-known and experienced competitors.

Kalyn recently became the first female driver to win Class A in the Sports & Saloons in the opening race at Red Star Raceway on Saturday, 20 June. She then piloted her Midas Kia to fourth place in the second heat to claim overall victory for the day.

Her message to potential female motorsport competitors out there:"No matter what, never let your passion become your fear due to other people’s opinions. You can do anything you set your mind to and are passionate about."

We live in a world where facts and fiction get blurred
In times of uncertainty you need journalism you can trust. For only R75 per month, you have access to a world of in-depth analyses, investigative journalism, top opinions and a range of features. Journalism strengthens democracy. Invest in the future today.
Subscribe to News24
Related Links
Celebrate SA's 'Women in Autos' at the 2019 Festival of Motoring
'It's not the way to help women in motorsport' - female F3 driver slams W Series
Next on Wheels24
WATCH | Moto2 rider Canet 'cheats death' after serious crash

Subscribe to newsletters
DAYS
HRS
MINS
Voting Booth
Who should have replaced Sergio Perez at this weekend's British GP?
Please select an option Oops! Something went wrong, please try again later.
Sebastian Vettel - At least he'll get a taste of what the 2021 car will be like
26% - 558 votes
Nico Hulkenberg - He's been with the team before
27% - 583 votes
Fernando Alonso - A true racer, and the fastest Spaniard around
33% - 704 votes
Jenson Button - Any team can benefit from a champion driver
13% - 278 votes
Previous Results
Car Doctor
EXPLAINER | Why the exploded tyre on the back of that Ford Ranger caused so much...