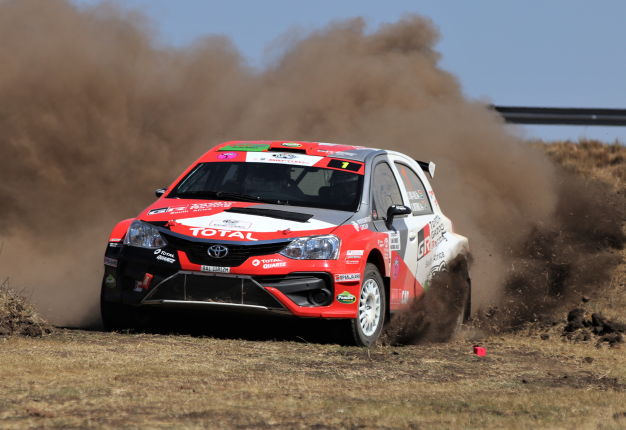 • The first two rounds of the South African National Rally Championship got underway this weekend.

With a third of the year almost completed, the 2020 South African Rally Championship got underway in Secunda this past weekend. Twenty-two teams came together to share their passion for dust, speed and fast cars during a double header for the Lake Umuzi Rally.

The rally course featured a combination of fast and flowy stages, hairpins, tight turns and narrow gates that the competitors thoroughly enjoyed.

Guy Botterill and Simon Vacy-Lyle dominated the race and were the NRC1 and overall victors in both rounds in their new Toyota Etios R4.

Having moved from a front wheel drive to a new four-wheel drive, the team took a competitive but cautious approach.

"It was nice to get two wins under the belt. We are still learning about the car and left a lot of time on the table," says Botterill.

"We were pushing but also circumspect, making sure we gathered as much information as we could from this event. It takes time to understand your car, and the best thing we could do was gather some mileage."

Theuns Joubert and Carl Peskin were hot on their heels, coming second overall in both rounds in their Toyota Yaris S2000. Then it was Johan Strauss and Elzaan Venter who got third place in Round 1 of the NRC1 class.

Chris Coertse and Greg Godrich were formidable contenders who unluckily met a pole in the first round. Working through the night to repair the Hyundai I20 R4, they came back strongly in Round 2 and ended third in both their class and overall. A real highlight of the event was the battle of the Polo Vivo GT Class, which welcomed fresh, young talent to rallying.

In Round 1, Benjamin Habig and Barry White romped to a solid win and an impressive fifth place overall.

The second round belonged to Jayden Els and Matt Kohler, who also finished seventh overall.

A classic Ford Escort, driven by Natie Booysen in the national class, brought some nostalgia so appropriate to this event which is now in its 60th year.

Meanwhile, a variety of regional competitors also came out to play, delivering some spectacular performances and new teams. The NR1 class had a super turnout with four contenders.

We live in a world where facts and fiction get blurred
In times of uncertainty you need journalism you can trust. For 14 free days, you can have access to a world of in-depth analyses, investigative journalism, top opinions and a range of features. Journalism strengthens democracy. Invest in the future today. Thereafter you will be billed R75 per month. You can cancel anytime and if you cancel within 14 days you won't be billed.
Subscribe to News24
Related Links
Toyota Gazoo Racing's Botterill and Vacy-Lyle begin rally title defence
Say hello to the Mitsubishi Xpander4, the world's first MPV rally car
Next on Wheels24
Red Star could bring surprises to the closely-fought Mobil 1 V8 Supercars title battle