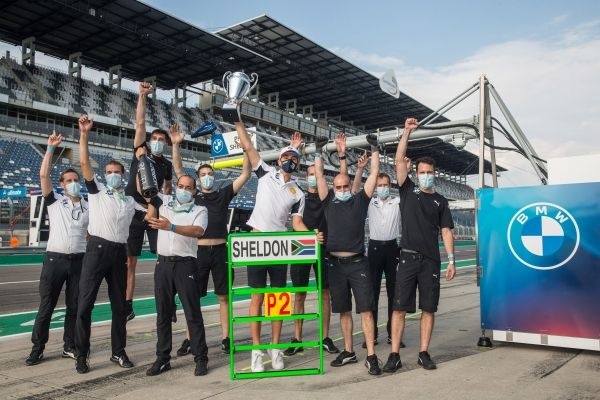 • The 21-year-old became the first South African to secure a podium result in DTM.

He finished second, after qualifying in fourth place, at the Lausitzring behind Audi's Nico Müller who won for the third consecutive time. Van der Linde managed a sixth place finish in the opening race at the tough Spa circuit in Belgium.

The result catapults the South African to fifth place in the drivers' standings on 26 points, he is the best-placed BMW driver. The DTM season got off to a delayed start at Spa-Francorchamps at the beginning of August.

"I’m over the moon with my first DTM podium. I was so close at Zolder last year, but then missed out on the final lap. This time I called up everything I could. I tried to catch Nico Müller at the front, but he was just that little bit too fast in the end," Van der Linde said.

The factory driver praised his team and reckons his M4 DTM has improved, he said "we have made a clear step forwards and are now able to challenge the Audis. My car was fantastic today – many thanks to the team."

Another BMW works driver flying the South African flag is Jonathan Aberdien. He finished 14th in the race after technical problems early on forced him to pit, consequently dropping right down the field.

"I had a difficult qualifying, so I had to start from right down the grid. We definitely need to analyse that looking ahead to tomorrow. I started the race really well, but then I lost power after a few laps, which cost me a lot of time," said Aberdien.

The teams will return to Lausitzring this weekend for the second consecutive race. We live in a world where facts and fiction get blurred
In times of uncertainty you need journalism you can trust. For 14 free days, you can have access to a world of in-depth analyses, investigative journalism, top opinions and a range of features. Journalism strengthens democracy. Invest in the future today. Thereafter you will be billed R75 per month. You can cancel anytime and if you cancel within 14 days you won't be billed.
Subscribe to News24
Related Links
BMW works drivers Van der Linde and Aberdein to fly SA flag in DTM
WATCH | The most exciting corner in racing - Eau Rouge
Next on Life
Champagne motorsport taste on a beer budget - Africa's only 24-hour race for 'lemon' cars is back