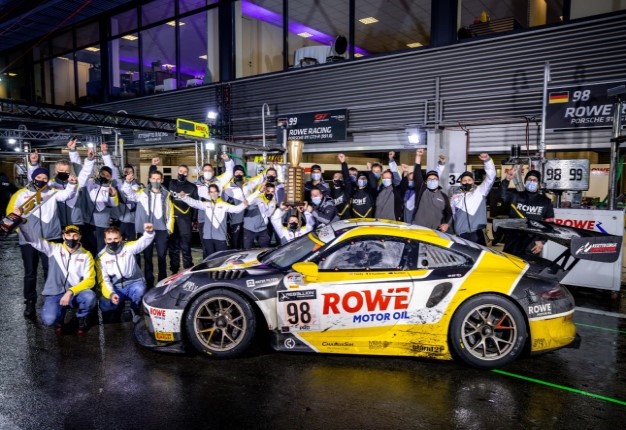 • Nick Tandy crossed the finish line at 15:30 on Sunday after completing 527 laps.

• The Spa 24 Hours is the headline race of the GT3 endurance season.

Attending the Spa 24 Hours race at the famed Spa-Francorchamps circuit in Belgium is a top priority on my bucket list.

The track is arguably the most demanding circuit in the world, with high-speed corners every way you look.

From Blanchemont into the bus stop chicane, and down to La Source before climbing the equivalent of four stories at Eau Rouge into Raidillon, and down the high-speed Kemmel Straight.

It is just the most amazing track in the world, and hosts the headline race on the International GT Challenge calendar. The Spa 24 Hours pits some of the world's best drivers against each other in spectacular GT3 cars and then adds in 12 hours of night driving.

Don't forget the variable weather conditions that the area is known for, and it's bound to be an interesting race.

The overall victory went to the #98 Rowe Racing Porsche of Nick Tandy, Earl Bamber and Laurens Vanthoor, unbelievably the team led the race outright at the beginning of the final hour of the race.

The Mercedes-AMG of Raffaele Marciello converted pole position into an early lead but became one of the high profile retirees. Have a look at some of the moments from the race.

1. South Africa's Kelvin van der Linde retires with a mechanical failure just four hours into the race. The Team WRT Audi R8 GT3 headed into the race as a favourite for an overall victory.

Van der Linde had been battling for the lead early on in the race and was understandably disappointed.

"Heartbreaking to wake up on a Sunday knowing we can't fight to the end of the race anymore. It looked so promising, the team and my teammates were faultless all weekend. Unfortunately we had to retire the car halfway through my first double stint last night," the 24-year-old said.

MASSIVE DEVELOPMENT: @followWRT's #31 Audi is stationary at the top of Raidillon and @KelvinvdLinde is out of the car! It looks like a mechanical issue rather than an accident but, regardless, one of the favourites is out!#IntGTC | #Spa24H ?? pic.twitter.com/dmnlYEg35b

2. This outrageous overtake on Eau Rouge in the soaking rain for third place

With 15 minutes to go Mateo Cairoli pulled off a brave move on Ale Pier Giudi in terrible conditions to dramatically claim third place in the race.

3. Nick Tandy's brilliant car control to avoid a tank slapper taking the Porsche into the barriers heading up Eau Rouge.

Endurance racing is about concentrating for long periods of time and that came to the fore when Tandy's Porsche got slightly sideways and his quick reactions saw him recover rapidly.

4. With less than an hour till the finish of the race a full course yellow was waved by the marshals as the BMW M8 BoutsenGinion art car found itself on the gravel.

When the green flag was waved after a safety car period, Patric Niederhauser in the Audi knew it was the best time to attack Tandy and that made for some interesting racing.

We're back to green flag conditions and @P_Niederhauser takes the fight to leader @NickTandyR as they exit the bus stop!

But the #RoweRacing Porsche holds on and manages to extend the lead gap heading up into Les Combes!#Spa24h ?????? #GTunited2020 pic.twitter.com/TfHX93UzlJ

We live in a world where facts and fiction get blurred
In times of uncertainty you need journalism you can trust. For only R75 per month, you have access to a world of in-depth analyses, investigative journalism, top opinions and a range of features. Journalism strengthens democracy. Invest in the future today.
Subscribe to News24
Related Links
Unsung heroes of Le Mans - Goodyear recaps 14 endurance race wins
Le Mans 24 Hours organisers announce new compact schedule
Next on Wheels24
UPDATE | Postponed historic Kyalami 9 Hour gets new 2022 dates