• The action gets underway on Friday with the running of the Ford Parys 400 and the Toyota Gazoo Racing SA Vaal 400 on Saturday.

• The drivers and navigators will cover roughly 800km over two days.

The final rounds of the South African cross country championship take place this weekend in Parys in the Free State.

There is no rest for the drivers and navigators as they will tackle a full round of the championship on Friday, 23 October, in the form of the Ford Parys 400 and then complete a modified version of the same route on Saturday, 24 October.

The second race will be the season finale called the Toyota Gazoo Racing SA Vaal 400 and each round will cover roughly 400 kilometres and count full points towards the championship. Lategan and Cummings in pole position

Defending champions Henk Lategan and Brett Cummings go into the double-header weekend with a commanding lead in the production vehicle category, and are the odds-on favourites to win a second successive title.

Behind them, teammates Giniel de Villiers and navigator Juan Möhr are 37 points adrift, having moved into second place in the standings after Round three of the series.

De Villiers' regular navigator, Alex Haro (Spain), has been unable to travel to South Africa due to the ongoing Covid-19 pandemic, and as a result Möhr finds himself further down the standings than his driver.

However, the Spaniard will end off the season alongside De Villiers for the double-header in Parys.

The Toyota Hilux crew will, however, be keeping a close eye on Brian Baragwanath and Taye Perry (CR6 Buggy), who are only three points behind in the standings.

There's a tight battle between Toyota's Shameer Variawa and fellow-Hilux driver Chris Visser who are tied fourth in the championship. The Class T title chase sees Malane Toyota’s Johan and Werner Horn leading the chase, just two points ahead of Terence Marsh (Nissan) and Wors Prinsloo (Ford). This contest has the makings of a good tussel, as all four crews can win still the championship heading into this weekend's races.

"Sure, there'll be some challenges, and with very limited time between the two events, the pressure will be on the drivers to avoid trouble, especially on Friday. With that said, we've been doing a lot of work on our Hilux in preparation for Dakar, and we’re keen to see how our recent changes translate in race conditions, so they can’t hold back too much either!" 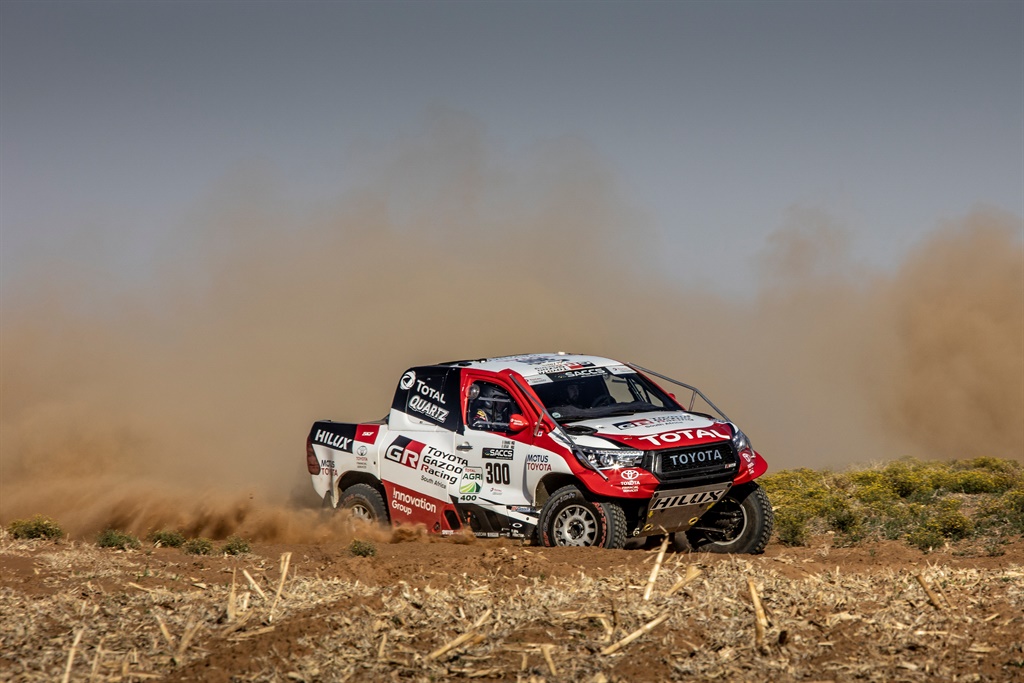 Due to Covid-19 restrictions, the Parys double-header will again take place without spectators, but fans can follow the action via Toyota motorsport's social media feeds; as well as the Rallysafe app, which is available free of charge for Android and iOS devices.

The Ford Parys 400 will get under way with a 14km qualifying race, which starts at 08:30 on Friday, with the main race following at 10:30. Saturday will see another 14kilometre qualifier that starts at 08:00, before the main race of the Toyota Gazoo Racing SA Vaal 400 gets under way at 10:00.

We live in a world where facts and fiction get blurred
In times of uncertainty you need journalism you can trust. For only R75 per month, you have access to a world of in-depth analyses, investigative journalism, top opinions and a range of features. Journalism strengthens democracy. Invest in the future today.
Subscribe to News24
Related Links
Such dominance! Toyota Gazoo Racing SA makes it four from four in SA rally championship
Rally raid action as Toyota SA E-Sport's challenge hots up
Next on Wheels24
UPDATE | Postponed historic Kyalami 9 Hour gets new 2022 dates