Cape Town – The Cape Town Stadium was roaring on Saturday (April 27) night as eight monster trucks put on a powerful display in the heart of the Mother City.

Monster Jam, that travelled all the way from the States to South African shores, just completed their Durban stint and wowed the crowds once again in Cape Town.

The 4500kg machines burnt some serious rubber as they jumped over, crashed into, and backflipped on the specially made sand track at the packed stadium. 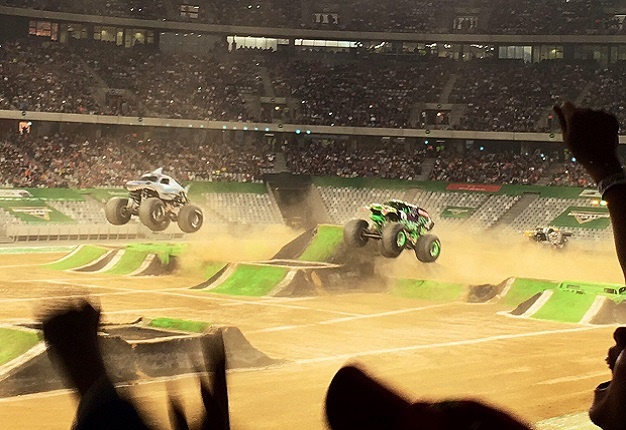 The trucks - capable of reaching speeds up to 110km/h - raced each other, threw some serious donuts, kicked up heavy dust, and unleashed vehicular madness during the freestyle division.

Although Max-D, driven by Colton Eichelberger, was crowned the ultimate winner of the night it was surely Steven Sims in his Monster Energy beast that stole the show with a perfectly executed backflip that had the crowd on their feet.

Have you attended Monster Jam in SA? Share your experience (and pics) with us. Megaladon, driven by Chad Tingler, was undoubtedly a fan favourite and impressed with his steering skills while Monster Mutt Dalmatian, driven by Candice Jolly, was absolutely ferocious on the track.

Of course, not every trick went off without a glitch, and the Caterpillar bulldozers were working overtime to get the giant vehicles back on their wheels which saw poor Max-D loose most of his intimidating spikes every time he landed on his roof.

All-in-all it was a well-executed event that brought something completely new and exciting to our local shores. Everyone seemed to have a blast – from young to old. Let's hope they do it again soon.

Catch the trucks next at FNB Stadium in Johannesburg on Saturday, 4 May 2019. We live in a world where facts and fiction get blurred
In times of uncertainty you need journalism you can trust. For only R75 per month, you have access to a world of in-depth analyses, investigative journalism, top opinions and a range of features. Journalism strengthens democracy. Invest in the future today.
Subscribe to News24
Related Links
#FreedomDay: 27 reasons to be a proudly South African petrolhead
Next on Wheels24
2021 Kyalami 9 Hour is all set to re-ignite South Africa's passion for motorsport