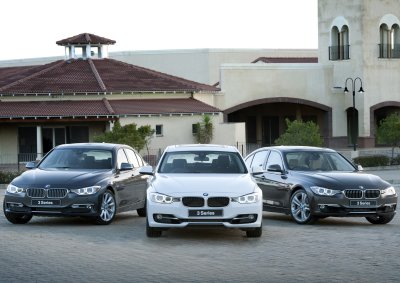 <b>THREE-PRONGED ATTACK:</b> The all-new BMW 3 Series shown (from left) in Modern, Sport and Luxury lines. <a href="http://www.wheels24.co.za/Multimedia/Manufacturers/BMW/2012-BMW-3-Series-20120314" target="_blank">Image gallery</a>
It was no secret that BMW’s E90 3 Series was on its way out yet (with the help of a handy, little sale) it remained one of South Africa’s top selling cars right to the very end of its life cycle. Will the all-new, sixth generation F30 just launched in SA have the same appeal?

BMW’s history in South Africa is practically the history of the 3 Series sedan – the most popular model has been built at BMW Plant Rosslyn, north of Pretoria, since 1974 and local cars have contributed to a sales figure that tops 12-million over the past five generations. The 3 Series, sold in 132 markets around the world, accounts for one third of BMW's sold worldwide.

Gaze at the pictures and take in the multitude of technological updates at your leisure – you may need to steel yourself for the price below.

Three models are available at launch and will be expanded during the course of 2012, starting with the important 320i in May. For now, the 320d leads the diesel charge while petrol engines power the all-new 328i and the 335i. All launch models have BMW’s twin-scroll TwinPower Turbo technology.

We set off on a route that took us from BMW Rosslyn further north and east into Mpumalanga and back to Pretoria central via the city’s eastern suburbs on a mix of freeway, country and urban roads where the car’s new chassis and engines were allowed to do the entertaining.

The new 3 Series’ changes are more than skin-deep. The latest sedan’s wheelbase is 50mm longer at 2810mm and the overall car is 93mm longer than the E90 it replaces at 4624mm. The longer wheelbase also translates to a cabin that is more spacious – especially for rear passengers – but more on that a little later.

The car’s wider front and rear tracks (they’ve increased by 37mm and 47mm, respectively) have helped to create a sedan that feels more athletic than before. Despite the F30’s body being about 25kg lighter, the use of state-of-the-art steel and alloy combinations have maded the chassis 50% stiffer.

This translates into the real world – and on the track, we found – into a car that feels inherently sporty. The 320d four-cylinder diesel delivers 135kW and a very useful 380Nm of torque which should make it a breeze around town as well as on the open road.

It proved to be quite responsive when quick-fire overtaking manoeuvres was required and, as a bonus, the cabin was delightfully quiet.

The headline act (for now) is the always-entertaining 335i with its turbocharged, three-litre, straight six churning out 225kW and 400Nm from only 1200rpm. This engine’s capacity to work is enviable, particularly when presented with an open road and with the standard Driving Experience Control switch tuned to either Sport or Sport+ modes to fully exploit the more explosive throttle responses and tighter steering feel, for example.

The star performer, however, in the new F30 is the high-output, two-litre, four-cylinder petrol engine powering the 328i. The new-generation turbocharged engine develops an entertaining 180kW and 350Nm but it in no way sounds as entertaining as the straight-six 330i it replaces.

While all the cars are available with BMW’s sublime eight-speed auto transmission, we had the chance to test the limits of the 328i with the standard six-speed manual gearbox at the Zwartkops Raceway, west of Pretoria.

Here the stock-standard car put on a display of poise, balance and agility amid screeching tyres and noxious brake fumes around the tight and twisty track, with just a hint of understeer keeping things entertaining.

If you’re a 3 Series fan in need of more sports, an M Sport pack with special exterior and interiof features will be rolled out from mid-2012.

You may have had some time to become accustomed to the F30’s styling since it looks remarkably like a mini-5 Series. The biggest visual differentiator over its predecessor are the new angular headlight clusters that now extend to the more prominent kidney grille, while BMW’s signature short front overhang also adds to the car’s imposing character. The rear, L-shaped light clusters are in keeping with the current BMW standard.

In line with the automaker’s programme of Efficient Dynamics, the entire 3 Series line-up is more efficient than the one it replaces, thanks to a combination of lightw materials and high-tech engines. Auto stop/start is now available on all engine and transmission combinations, the Driving Experience Control system has an Eco Pro setting to aid more economical driving, brake energy regeneration and a number of additional technologies contribute to the 3 Series’ increased efficiency.

As with the 1 Series hatchback launched in South Africa in late 2011, the new 3 Series comes with a choice of three style packages called the Sport, Luxury and Modern, differentiated by grille and fog light housing treatments, separate cabin accents and colours for the key fobs.

With the recent revision of Mercedes-Benz’s C-Class range in South Africa and the imminent introduction of the facelifted Audi A4, BMW’s F30 3 Series is being launched into a rather hostile environment. And while local BMW owners have proven loyal in the past, the F30’s striking design and widespread use of technology could very well win it even more fans.

We live in a world where facts and fiction get blurred
In times of uncertainty you need journalism you can trust. For 14 free days, you can have access to a world of in-depth analyses, investigative journalism, top opinions and a range of features. Journalism strengthens democracy. Invest in the future today. Thereafter you will be billed R75 per month. You can cancel anytime and if you cancel within 14 days you won't be billed.
Subscribe to News24
Related Links
BMW 3 Series image gallery
We drive BMW's heaviest hitter
Next on Wheels24
Sharper, sportier and SA-bound - BMW reveals updated 3 Series and it looks good!