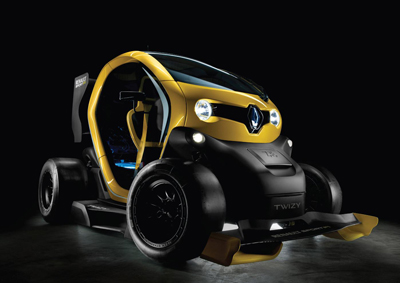 The Twizy went on sale in the Europe in March 2012 and was the best-selling plug-in hybrid car in Europe that year.

The Sport F1 is supposed to be a fun take on the automaker’s urban battery car but has a more muscular styling (not necessarily prettier) and impressive performance credentials to close the gap between F1 technology and that of production cars.

The Sport F1 is based on a single-seater concept and is equipped with a front splitter, side-pods, rear wing and a diffuser complete with an F1-style rain light.

The quirky-looking car’s biggest F1 car similarity is a kinetic energy recovery system (kers) that instantly boosts six times more power to the engine (13kW to 72kW), making it go as fast as a Mégane RenaultSport 265 would from zero to 100km/h.

Renault Sport F1 president and MD Jean-Michel Jalinier said: “We always said we wanted to create F1-derived technology that was road-relevant. We hope the Twizy will make a few people smile while also making a serious point.

“Kers is a very complex system. Integrating it into another electric vehicle was a very serious endeavour but the collaborating teams managed to make it work, delivering a huge boost of power safely and efficiently.”

"I’m not sure we’ll be seeing many of these on the road but it does show that the same principles we see on the race track can be filtered down to road-legal – this is just the evil elder brother."

The Twizy F1 has the same slick tyres as those fitted to the Formula Renault two-litre single-seater. Other features derived from the racing world are its mirrors, energy-saving diod lights and the diffuser, which incorporates the rain light of an F1 Renault 3.5-litre car.

The car’s rear seat has been replaced by the kers which is in a transparent housing. It is also equipped with an F1-type steering-wheel.

The Twizy F1 car comes with two electric motors: the original 13kW electric unit coupled with the kers  which, when activated, increased power output for about 13 seconds, just as it is in the case of an F1 car. It's supposed to recover some of the kinetic energy generated under braking.

Instead of being changed into heat, the energy is stored before in a battery before being used briefly to boost power output, just as in F11.

The system comprises of three main elements: an electric motor/generator directly linked to the driveshaft, specific lithium-ion batteries and a kers control unit.

According to Renault, the motor/generator serves as, well, a generator and a motor. In ‘generator’ mode, it functions like a dynamo to convert mechanical energy into electrical energy which is then stored in a battery. To use this energy, the process is reversed. The system then switches to ‘motor’ mode to use this stored energy to deliver a power boost to the wheels via the motor.

That said, it doesn’t mean the car is as fast as a single-seater race car. As a consequence, the kinetic energy produced under deceleration is insufficient to charge the kers battery. To get round this problem, engineers developed a system that enables the battery to be charged by drawing power from the main motor.

The driver can choose between two kers modes using controls on the steering-wheel.

Kers and the Twizy’s principal motor reach 36 000rpm and 10 000rpm respectively, with synchronisation ensured by a 1:3.6 reduction gear which uses the same drive gear as that of the F1 V8 engine.

The car also comes with its own data logging system, the information displayed on a multi-page screen on the steering- wheel. This display can be personalised to show information about Twizy’s and the kers F1 electronic systems.

The Twizy Renault Sport F1, the automaker says, bridges the gap between F1 cars and road cars in the same way as the Espace F1 - unveiled at the 1994 Paris auto show. This prototype was the fruit of a partnership between Renault and Matra  to celebrate the 10th anniversary of the Espace’s launch. Its carbon-fibre shell was based on the design of the second-generation Espace.

Espace F1 used the same 820hp RS5 V10 3.5-litre 40-valve engine as that which powered the Williams FW15C F1 car. It was mated to a semi-automatic six-speed paddle-shift gearbox.

Odd-looking cars seems to be the way of the future. Take a look at Toyota's ME.WE, let's hope these cars don't go into mass production.

We live in a world where facts and fiction get blurred
In times of uncertainty you need journalism you can trust. For only R75 per month, you have access to a world of in-depth analyses, investigative journalism, top opinions and a range of features. Journalism strengthens democracy. Invest in the future today.
Subscribe to News24
Related Links
SPIED! Renault Twizy
Next on Wheels24
New GL in SA - classiest 4x4xfar

Subscribe to newsletters
Lockdown For
DAYS
HRS
MINS
Voting Booth
Do you think Lewis Hamilton deserves to be knighted by the Queen?
Please select an option Oops! Something went wrong, please try again later.
Yes, he is an incredible athlete
36% - 141 votes
No, he hasn't done anything special
21% - 83 votes
He is good, but doesn't deserve the honour
43% - 166 votes
Previous Results
Car Doctor
EXPLAINER | Why the exploded tyre on the back of that Ford Ranger caused so much...