Road test: 200km driven in an electric BMW i3 <B>WHIZZING ABOUT:</B> The BMW i3 REX is a great indication of the direction the automotive world is headed in. <I>Image: Wheels24 / Charlen Raymond</I>
Charlen Raymond

Cape Town - Much is being said about the future of motoring: the various directions it’s heading in, and the changes vehicles are undertaking, etc.

One of the biggest talking points of the modern era of motoring is how electric vehicles (EVs) are steadily becoming more mainstream. And South Africa is not being left behind in terms of this.

Car buyers can make a purchase from a Nissan Leaf all the way to an electric Mercedes-Benz S-Class. There is literally an EV for most budgets on the market today.

To understand EVs a little better Wheels24 recently had a BMW i3 REX (Range Extender) on test. And boy oh boy, what an experience that was!

The sounds of silence

I always knew that one day I’d drive at least one of BMW’s electric cars, but I did not know what to expect in terms of overall experience. Locking/unlocking is done like any other car with the remote, manually hitting a button inside the car, or on pull-away. Nothing strange here. But starting the vehicle you’d best not expect any roar from the exhaust or a rumbling from the engine.

Foot on brake, close the driver’s door (very important!), and hit the start/stop button behind the steering wheel. The lighting around the said button will change colour from red to blue; signalling that the car is “on”. And that’s that. No noise, no circus acts to celebrate the achievement. It’s as quiet as the Northern Cape on a 50° day.

WATCH: Car thief steals BMW i3, says it will 'leave anything for dust'

Turn the steering wheel mounted gear lever to Drive or Reverse and off you go. It’s almost ghostly. Eerily quiet. And when the last BMW you drove was the M3 Competition Pack, you best believe the i3 is on the complete opposite side of the spectrum!

The last EV I drove was in 2006 at my Matric Ball: a golf cart. Though the two vehicles can’t be compared, the i3 took my thoughts back to that day when I held up cars in the main road as I commuted at 15km/h. But the i3 does not commute at 15km/h. Hit the accelerator and the car surges forward with an electric whizz in the background. The engine spools and churns as it hurries onward with an urgency of own right. This is different, this is fun! This is much faster than my Matric Ball car! 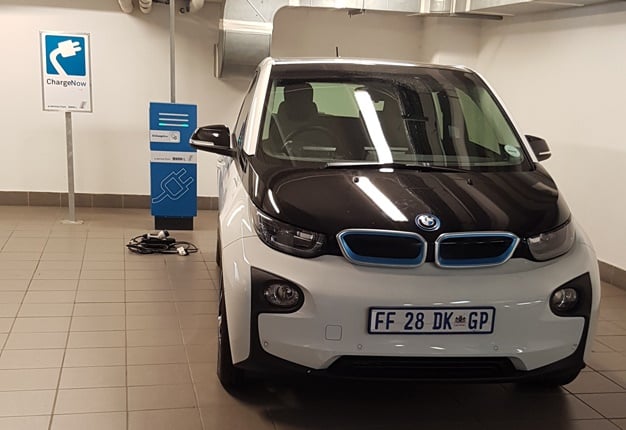 There are two ways to charge the i3’s electric motor: either at home or at a BMW dealer. If the car is to be charged at home, plug the lead into a normal three-point wall socket and attach the other point to the car’s charging inlet just above the right rear wheel. The lights around the car’s charging inlet will glow different colours when charging commences. The problem is that home-charging can take a fair amount of time, plus it will devour your units if you have pay-as-you go electricity. I charged it for three hours and electric range increased by only 20km.

READ: BMW names SA dealers for new i3, i8

But charging it at a BMW dealer with fast-charging facilities is the way to go. Luckily for us, there is a BMW dealership literally across the road from the office and we could make use of their charging point at no cost at all. This is a free charging point for all electric BMW owners (provided you have a charging card). The fast-charging cable looks different to the normal home-charging one, and when plugged in it will see your i3’s electric range go from 2km to 130km in a fraction of the time it would've taken at home!

Not everyone will be near a BMW dealer with this facility and home-charging would be the only resort. However, for a small fee, BMW SA will install a fast-charging unit at your house. Enquire about this! But if it’s slightly out of your budget, invest in solar power. Eskom is just too unreliable, unpredictable and expensive nowadays!

Very simple and easy to recharge your #BMW #i3rex at home. My first taste of the "electric lifestyle".@Wheels24 @BMW_SA @EdwardMakwana @BMW pic.twitter.com/T8FINDvcWg

During the test tenure I had to make my way to Kleinmond and unexpectedly had to drive there in the i3 REX. But the electric range took a beating after running a few errands that morning. Luckily, in addition to the electric motor, this car comes with a petrol engine, too, but the motor has a maximum range of around 130km. Still, after covering almost 100km just a few hours prior to my departure meant that it was going to take a monumental effort to reach my destination. Especially since I didn't drive with a conservative mindset...

Three driving modes are available: Comfort, EcoPlus, EcoPlus+. For the entire drive I only toggled between the latter two modes, with EcoPlus+ deactivating the aircon to extend electric range just a little further.

I drove to and through Somerset-Wes and headed for Clarence drive (R44). A beautiful road; perfect for a driver’s car. And though the i3 is not a driver’s car I could not resist the temptation to put the car’s dynamic traits to the test. The i3 literally lunged forward. Because it’s electric, all the torque is already available from 0rpm. The engine whizzed as the car foxtrotted through the bends. There was almost no need to use the brake pedal, because coming off the accelerator will automatically brake the car just enough to carry momentum around the corner. The tyres are on the thin side and did squeal because it was not made for this type of driving, but thanks to BMW’s vast experience in exemplary driving dynamics, the i3 soldiered on in a way that would make even the M3 a proud big brother.

And then it happened. The electric range hit zero and the car switched over to its petrol engine. Gone is the instant urge, gone is the rapid-feeling acceleration, gone is the overtaking prowess of note. 30km from Kleinmond and I’m driving a petrol-powered i3. When empty, the petrol engine charges the electric motor to give it a little bit of range, but the sound that accompanies the charge is a bit rough and unrefined. This is may be something BMW can work on for the next phase of the i3’s lifecycle: the muffling of the on-the-go charging.

Clarence drive (R44) will never be the same again! Turned this wonderful piece of road into Electric Avenue! The #BMW i3 is a very good example of the direction family cars are heading in. The future is literally here. i3 = ?, #i8 = soon. #CapeTown #carsofinstagram #carporn

After a single day’s driving of more than 200km that included various driving styles and road conditions, the BMW i3 REX finally bowed the knee. I could not do anymore to increase the electric range and the car did all it could to give me that last electric kilometre. In my books this is a win and the i3 is exemplary of the direction the motoring world is heading in.

As a family car or little run-about the BMW i3 REX fits the part quite well and proved its worth in modern society, but fitting the bill as an electric alternative to sports cars perhaps not as much. That’s a task for the i8. EVs may not enjoy the same preference in SA as it does in first-world countries with regards to popularity and infrastructure, but there is a place for them. Perhaps not as prominent now, but definitely in future.

We live in a world where facts and fiction get blurred
In times of uncertainty you need journalism you can trust. For only R75 per month, you have access to a world of in-depth analyses, investigative journalism, top opinions and a range of features. Journalism strengthens democracy. Invest in the future today.
Subscribe to News24
Related Links
BMW goes electric - i3 launched in SA
Next on Wheels24
REVIEW | The updated Prado VX-L is an unwavering continuation of Land Cruiser tradition