• Audi South Africa is on a massive product offensive in 2021.

• In the latter stages of March 2021, the automaker launched 15 new models in the country.

• The majority of these new R and RS vehicles will go on sale from 1 April.

Audi South Africa is on an extreme product offensive that should, by the end of 2021, see it have the 'youngest' model line-up in the country. In March 2021, the automaker announced a 15-model strong line-up of RS and R vehicles that will flood the local market, with more models scheduled for local arrival as the year progresses. In around 24 months, the RS family will be expanded with the new RS 3.

Audi's intention with this product offensive in 2021 is to enjoy a larger share of the small but lucrative segment for high-performance cars. According to Audi South Africa, this segment made up only 5% of overall sales in South Africa during 2020, but it is compelling enough for them to warrant it as one worth exploiting.

As such, the automaker plans to have its R and RS models make up 10% of its sales, equating to one in ten of its vehicles sold in 2021 being an Audi high-performance model. If Audi achieves this goal, it will lift the local Four Ring market into the Top 20 R and RS markets globally. Given Audi's second consecutive year of growth in the local premium market - up by 0.3% to 18.3% - the automaker believes it can achieve the goals it's set itself for the new year. Audi South Africa took a huge gamble in launching 15 new models in one go, with ten of these going on sale locally on 1 April 2021. The family of cars consists of, among others, coupe's, SUVs, and station wagons, all warranting their place in the local market.

Leading the SUV charge is Audi's SQ7, SQ8, and RS Q8. A 4.0-litre V8 diesel engine powers the two SQ models. Both SUVs have been launched as limited edition vehicles in South Africa, with the consignment of vehicles already sold out. The RS Q8, however, will be on sale for a more extended period and promises to impress with astounding levels of performance. The 441kW/800Nm RS Q8 retails for R2.3 million, but its burbling V8 engine is well worth the price.

Other models that made up the day's line-up included the RS 6 Avant, RS 7 Sportback, RS 5 Coupé, RS 5 Sportback, TT RS, and S8 sedan. 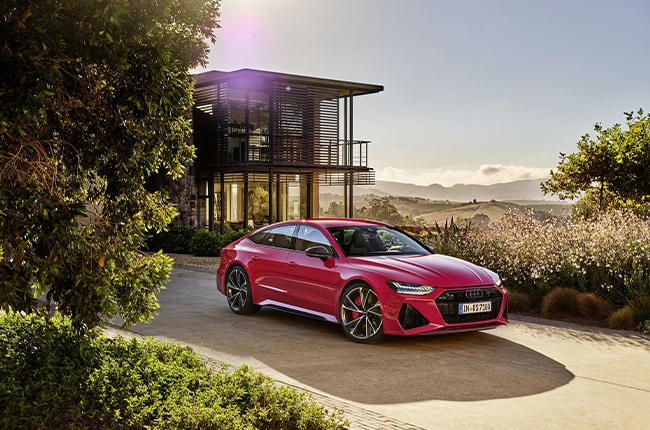 The headline was undoubtedly the new R8 Coupé and R8 Spyder. Audi's halo sports car has undergone some major changes and made its local debut earlier this year. Some of the automaker's most elite customers took early delivery of this car in February 2021 - almost two months ahead of its official sales date (1 April). The new R8 is undoubtedly worth its weight and has proven to be the consummate sports car.

Powered by a naturally aspirated (N/A) 5.2-litre V10 engine, the sports car can hurdle from 0-100km/h in little more than three seconds and top out at over 320km/h. The launch experience's brief drive allowed drivers to get to grips with the facelifted R8, testing two of its most-used features: acceleration and braking.

READ: Audi's latest R8 is here - We have pricing for Ingolstadt's supercar

With traction control firmly engaged, drivers could mash the throttle and race up to a speed of around 95km/h, whereafter the brakes were firmly applied. The engine races towards the redline in pure N/A goodness, with an unadulterated sound emitted from the dual exhausts. Stopping power is provided by ceramic brakes, with up to 70% of the brake force on the front wheels.

Turn up your sound for this one! Two @audisouthafrica R8s off the line under full throttle.#PerfomanceIsAnAttitude pic.twitter.com/otJVbqYZwJ

Some of the biggest questions at Audi's media activation was around the upcoming eTron. Without giving too much away, Audi South Africa confirmed that the new RS eTron GT is in its final phases as the automaker looks to launch the car on local soil. No dates have been set, but the eTron is definitely SA-bound.

Spawning out of the eTron were questions on the longevity of ICE (internal combustion engines). According to Audi South Africa, it will have to adopt the change to electric mobility in the future. And while the uptake of electric vehicles (EVs) is still slow, it is undoubted that South Africans will have to make the mental switch that EVs are our future.

South Africa is a country that produces vehicles for both the local and international markets. If the country is to continue building and supplying vehicles to Europe, for example, where the uptake of EVs has kicked into overdrive, then the local car parc must run in tandem with the global demand.

READ: Tomorrow is here: Audi reveals its all-electric e-Tron GT - here's what you should know

With the European Union announcing plans to halt the sales of ICE in 2030 (some automakers will begin this process in 2025), it leaves the automotive world with roughly eight years to change its modus operandi. South Africa, unfortunately, must run at its own pace given our third-world status. But with government incentives a scarcity and big companies still hesitant to invest in the infrastructure to support electric mobility locally, we could see a world where ICE vehicles and EVs are sold alongside each other post-2030. However, this won't last forever and will South Africa, eventually, sell electric vehicles, only.

The eTron will be Audi South Africa's first foray into electric mobility, but the automaker is ready for the challenge that awaits it. If Audi SA manages to change the local consumer's mindset, the eTron could be a groundbreaking car in more ways than one. And it might just be the car to set Audi SA on the right path towards an electric future. All-new, SA-bound Audi e-Tron
Audi Media
We live in a world where facts and fiction get blurred
In times of uncertainty you need journalism you can trust. For 14 free days, you can have access to a world of in-depth analyses, investigative journalism, top opinions and a range of features. Journalism strengthens democracy. Invest in the future today. Thereafter you will be billed R75 per month. You can cancel anytime and if you cancel within 14 days you won't be billed.
Subscribe to News24
Next on Wheels24
Don't like the Jeep Gladiator? Here are three double-cab 4x4 bakkie alternatives