Recently, the Wheels24 team had a chance to drive the flagship model in BMW's 3 Series range. Well, the flagship until the all-new M3 arrives in the near future.

The M340i xDrive is a spectacular machine. There, I said it. It's achingly good and delivers a relentless attack of prowess and capability. It's good… but it has its shortfalls.

But let's backtrack first. In 2019, BMW launched its new 3 Series in South Africa. Comprising of both petrol and diesel models, the car impressed on a myriad of levels. From its drive to the much-improved interior, the car leads its segment, and probably will do so until either Mercedes-Benz or Audi can move the goalposts with their C-Class and A4, respectively.

Earlier this year, BMW launched the M340i xDrive. This car features an in-line six-cylinder 3.0-litre petrol engine, and it produces a mountain of power that is sent to all four wheels. The M340i xDrive has the best ride quality of any 3 Series ever made. The advancement of technology does have a significant part to play in this, and how the car adapts to various driving conditions is genuinely commendable. Prodding along in Comfort mode, the car is smooth with a subtle sturdiness to steering feel. The body allows for a bit of lean; a slight counter to the performance underpinnings of the car.

Three Sport modes are on offer: Sport, Sport Plus, and Sport Individual. For the most part, Sport Plus was the preferred driving mode of choice, as it's accompanied by a deep burble from the engine and an exuberant exhaust note. The various sport modes harden the suspension and tighten the steering feel. The car is planted on the road and enhances on-road stability, especially in a straight line. The new M340i's engine delivers 285kW and 500Nm, the latter available in a healthy window between 1850 - 5000rpm. Though launch control is not available, the car will run from 0-100km/h in 4.4 seconds - provided you can modulate the brakes and accelerator for maximum performance, and hook each of the eight gears at the right time. BMW claims a top speed of 250km/h.

While the xDrive system is good, it does have an impact on the car's on-road dynamics. Driving on a twisty road, the car struggles to maintain its balance. With the extra driveshaft upfront, BMW compromised that perfect 50/50 weight distribution over the front and rear axles. Push through a series of bends, and the car exhibits understeer. And though it did not happen every time, steering becomes numb in mid-corner. It can influence a driver's confidence in the car's abilities, especially when the rear becomes unsettled, too. 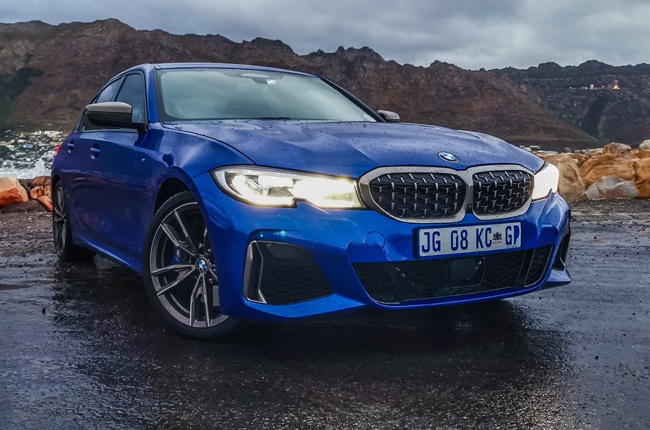 It is easy to say, then, that the BMW M340i xDrive is not a good car. Well, you'd be wrong. It's a fantastic machine that dishes up plenty of joy from a driver's point of view. It always conjures a smile, and a sense of 'damn, that was fun!' Despite the extra weight that unsettles the ride quality during spirited driving, most owners will never push the car to its limit.

In that regard, the drivetrain and suspension will always appeal to the average driver and have them applauding the car for its straight-line prowess and sturdiness through corners.

But for others who thought this car would be the perfect sports machine until the M3's arrival, it's a case of yes and no. If BMW had made this car perfect – the way we envisioned it to be - it would render the M3 pointless. At R1 079 300, this car is damn good and an ideal indication of what to expect from the forthcoming M3. If this is what you can afford, then it would be an investment worth making.

While good to a point, the BMW M340i xDrive will rarely put a foot wrong. 2020 BMW M340i xDrive interior. Image: Press Club / BMW SA
We live in a world where facts and fiction get blurred
In times of uncertainty you need journalism you can trust. For 14 free days, you can have access to a world of in-depth analyses, investigative journalism, top opinions and a range of features. Journalism strengthens democracy. Invest in the future today. Thereafter you will be billed R75 per month. You can cancel anytime and if you cancel within 14 days you won't be billed.
Subscribe to News24
Related Links
REVIEW | A one-night fling with the new BMW M340i xDrive
WATCH | E30, E46, E90 - All you need to know about the history of BMW's most popular model
Next on Wheels24
REVIEW | Rocky baptism for Ford Ranger Stormtrak en route to SA's star capital