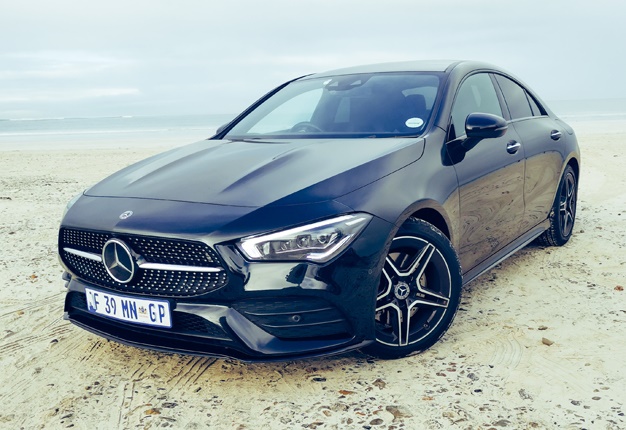 The original Mercedes-Benz CLS became a popular car and started a new segment: coupe sedan. Fast forward a few years and Mercedes created the CLA, spawned off the A-Class platform.

Now in second-generation guise and launched at the end 2019, the CLA wears an even sharper suit, is offered with the option of two frugal engines the latest MBUX (Mercedes-Benz User Experience) system.

For more on the interior of the CLA, feel free to click on the link as we take a more in-depth look. Our test model is the entry-level derivative sporting a 200 badge to differentiate it from the 220d model which is powered by a 2.0-litre turbodiesel engine.

The CLA now has competition from within Stuttgart in the form of the new A-Class sedan, and across from Munich with BMW's brand-new 2 Series Gran Coupe.

The CLA, A-Class sedan, and the A-Class hatch are built on the same Modular Front Architecture (MFA2) platform. The 200 model is surprisingly powered by a 1.3-litre turbocharged engine producing 120kW and a punchy 250Nm. Our model was fitted with optional paddle shifts that helped things along nicely when twisty roads presented themselves, and there was nothing negative about the gearbox's effectiveness.

The engine,however, suffers from turbo lag and therefore feels sluggish on pull away. It's something I got accustomed to after driving it for a few days,and once you're traveling at a decent cruising speed there's enough torque to overtake if needs be.

Power is directed to the front wheels, and while the chassis feels good, the steering feel was too light for my liking. I do understand why the engineers have done this: it's to maneuver through the tight city streets where the CLA will spend most of its time.

Our test unit wasn't fitted with adaptive dampers, and the ride did feel harsh at times, particularly on a pockmarked road.

Mercedes has fitted the CLA with a seven-speed dual-clutch gearbox and to be honest; the seventh cog is overkill because there isn't much torque, and when cruising in top gear the engine almost feels flat.

I did enjoy the CLA while commuting to work and back, BL (before lockdown) as I found the seats to be comfortable and enjoyed playing around with MBUX. It took a matter of seconds to connect up to the Bluetooth system, and the attention to detail and high-quality graphics used is exemplary.

Almost all the dimensions of the CLA have been increased; it's now longer and wider than its predecessor, and only 2mm lower.

It has a broader and longer track, and a 30mm increased wheelbase. So despite a now longer and wider car, the CLA feels less stodgy to drive than its predecessor.

The CLA boasts a bigger boot than the A-Class sedan and 2 Series Gran Coupe at 460 litres, and has enough space for young families or wealthy millennial couples.

I'm a fan of its bold exterior, but perhaps felt let down by the lukewarm driving experience. When I attended the international launch in Germany in 2019, I preferred the 220d derivative, and I'm afraid to say it'll be my choice in Mzansi too.

We live in a world where facts and fiction get blurred
In times of uncertainty you need journalism you can trust. For only R75 per month, you have access to a world of in-depth analyses, investigative journalism, top opinions and a range of features. Journalism strengthens democracy. Invest in the future today.
Subscribe to News24
Related Links
Fancy, fancy! Check out the Mercedes-Benz CLA 200 coupé's cool interior
WATCH | The Mercedes-AMG C63 S' V8 will live long in petrolheads' dreams
Next on Wheels24
2022 Lexus LX ultra-luxury SUV breaks cover and it's coming to SA in a few months