Mercedes-Benz launched its new CLA coupé in South Africa in the second half of 2019.

It forms part of Mercedes-Benz’s compact vehicle range alongside the A-Class, A-Class sedan, and GLA SUV. Locally, the second-generation CLA is available with both a petrol and diesel engine. The more powerful 35 AMG and 45 S AMG are also available.

As has become customary on German cars, prospective buyers can specify a raft of options on their CLAs. Our test unit, a CLA 200, came equipped with a host of these options that made the cabin feel special and unique.

The CLA 200 is instantly recognisable as a Mercedes-Benz and carries several traits that we’ve come to expect from Merc’s roll-out of new vehicles. For starters, the right stalk on the steering column is where the gear selector sits, while the electric seat adjusters and seat warmers/ventilators are positioned on the inside of the door.

The steering wheel is the newest iteration of what Merc has on offer, and the paddles to change gears with are positioned within close proximity to your fingers. What made our test unit so special is that it was specified with a two-tone interior. Along the doors and on the seats, a black and cream colour combination adorns the cabin. Not only does it create an ambiance of style and luxury, but it also conjures a sense of status and class.

On the seats, the black and cream leather has additional stitching to it. Front and rear passengers are treated to this treatment, but the colouring jumps especially at those in the rear. The two side seats on the rear bench blend the cream into the black, while the centre seat is solid black.

Chrome inserts on the door handles, centre console, and the headrests of the front seats add to the ambiance. The frame-less windows are another hit. While it may not be on the level of Mercedes’ more upmarket models, like the C-, E-, or S-Class, the CLA’s dashboard features two tablet-like screens that relay the necessary information drivers would need.

The screen in front of the driver relays driving information. Its display might not be as progressive as its more expensive siblings, but it gets the job done. Users can control the menus via the small black button on the right side of the steering wheel. The black button on the left of the steering wheel controls the second screen. From here, users can dial between a myriad of settings, all ranging from satellite navigation, multimedia, and vehicle settings.

The last-mentioned screen can also be toggled from the mouse pad between the front seats.

The Mercedes-Benz CLA 200 may be the entry-point to the CLA range, but it benefits from all the bells and whistles the automaker has to offer. While Merc can’t endow this vehicle – and the rest of the range, for that matter – with all the trimmings of its more upmarket family cars, it is an impressive space, nonetheless. 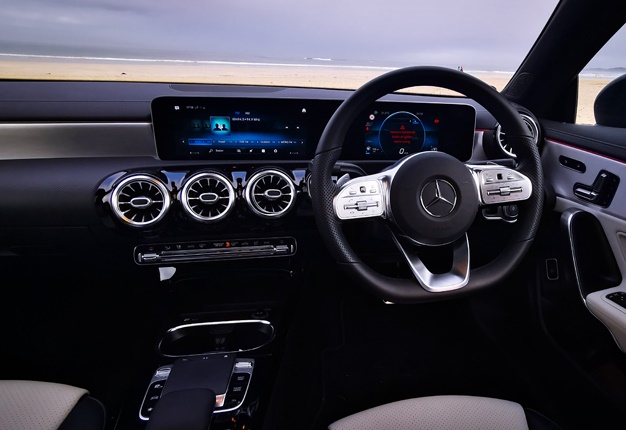 We live in a world where facts and fiction get blurred
In times of uncertainty you need journalism you can trust. For only R75 per month, you have access to a world of in-depth analyses, investigative journalism, top opinions and a range of features. Journalism strengthens democracy. Invest in the future today.
Subscribe to News24
Related Links
DRIVEN | Mercedes-Benz launches its new A-Class sedan and emotional CLA
DRAG RACE | New Mercedes-AMG CLA 35 vs Audi S3 vs Mini Clubman JCW
Next on Wheels24
OPINION | New sketch of 2022 VW Amarok makes us want one even more