Is that price for real?! Suzuki launches expressive S-Presso in SA

Suzuki South Africa launched its all-new S-Presso in via its social media channels last night (March 18 2020). The new car, set to go up against the popular Renault Kwid and Datsun Go, is Suzuki's answer to affordable motoring.

In a country where its economy is buckling under numerous strains, including the coronavirus, local consumers would look to the bottom-end of the new car spectrum to acquire a new car, as well as to save a buck or two.

The S-Presso joins Suzuki's strong local line-up alongside the likes of the Swift, Ignis, Dzire, Ciaz, and Ertiga. Over the last couple of months, starting with October 2019, Suzuki has seen its new vehicle sales go from strength to strength, including registering their best-selling months in South Africa, ever.

The S-Presso has to supplement the automaker’s sales success locally, and what the new car offers seems to do just that.

In light of the coronavirus, Suzuki opted to launch its new S-Presso via social media. This is a bit different, given that there is nothing tangible, but the use of Facebook and YouTube did enough to give an idea of what the car is all about.

The S-Presso, according to Suzuki SA, has a relatively short length at 3.56m. In this space, Suzuki managed to fit, what looks to be, a decently sized cabin. Because the S-Presso is regarded as a small SUV, the interior does seem to be spacious enough. Suzuki also says that the new vehicle has a high driving position, which underlines its SUV credentials.

Outside, the S-Presso has a very boxy design, but there is a sense of masculinity coming to the fore. Depending on the grade, the S-Presso should give eager buyers a fair amount of option to individualise their car. The S-Presso's interior looks to be a funky space. Colour inserts on selected panels have the same hue as the exterior. This does help the S-Presso exude a sense of youthfulness and playfulness.

On the higher-spec GL+ models, as well as the S-Edition models, a 7-inch colour infotainment system is standard. It features, says Suzuki, touch technology, and includes Apple CarPlay and Android Auto functionality. As expected, the system is Bluetooth, AUX, and USB compatible.

Suzuki says that the rear bench can be folded down, which increases the 240-litres loading bay. 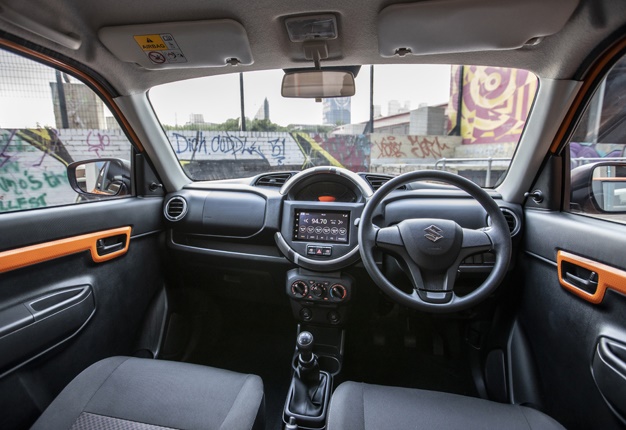 Codenamed the K10B, the S-Presso uses a 1.0-litre three-cylinder petrol engine that it also shares with the Celerio. This engine produces 50kW and 90Nm and is mated to either a five-speed manual gearbox or a five-speed automated manual transmission (AMT).

Suzuki claims that the S-Presso will sip 4.9-litres/100km, which should, theoretically, allow for a range of more than 550km on its 27L fuel tank. All prices are VAT inclusive. We live in a world where facts and fiction get blurred
In times of uncertainty you need journalism you can trust. For only R75 per month, you have access to a world of in-depth analyses, investigative journalism, top opinions and a range of features. Journalism strengthens democracy. Invest in the future today.
Subscribe to News24
Related Links
Fancy a cup? Suzuki's new S-Presso ready to go up against Renault's popular Kwid
Four budget cars that could beat South Africa's flailing economy in 2020
Next on Wheels24
RoadTrip | A prancing horse? Tracing the roots to Toyota's first emblem in the new Fortuner