• Jaguar's flagship SUV, the F-Pace has received a facelift.

• The carmaker confirmed it will introduce a plug-in hybrid model to the local market.

• The updated SUV is scheduled to launch in early 2021.

The updated F-Pace due next year will introduce a raft of changes to Jaguar's flagship SUV.

There are cosmetic changes to the exterior and and what Jaguar calls an all-new interior, that features latest generation Pivi Pro infotainment. Perhaps more important is the introduction of a plug-in hybrid model.

The updated front end features a larger grille while the Jag badge is now on the side fender vents. A new front bumper with redesigned air intakes and dark mesh details. The easiest way to tell the new model apart from the current model is by the new super slim all-LED quad headlights with 'Double J' Daytime Running Light (DRL) signatures, which are available with optional Pixel LED technology. The rear, features new slimline lights first seen on the I-Pace and there is a new bumper design and sculpted new tailgate.

All models will be available with the additional Black Exterior Pack, with bespoke elements finished in Gloss Black. Inside, the new cockpit design has a greater focus on the driver and incorporates a wireless charger and greater console stowage. The interior is dominated by a 29cm curved-glass HD touchscreen in a magnesium alloy casing, which controls the new Pivi Pro infotainment system. There's a new gear lever that features an upper section finished with 'cricket-ball' stitching, the lower part being made of precision-engineered metal.

There are new seats with wider cushioning, new massage functions and enhanced coverage of the heated and cooling areas.

An embossed Jaguar Leaper features on all occupant headrests on selected models, while a set of 'Est.1935 Jaguar Coventry' upholstery tags highlight the brand’s heritage. The F-Pace has the brand's new cabin air ionisation that cleans the interior air quality through Nanoe technology, which removes allergens and unpleasant odours. All this done by pressing the 'Purify' button.

For the first time in South Africa, the F-Pace is available with the P400e PHEV powertrain as well as the latest four-cylinder and new in-line six-cylinder diesel Ingenium engines. 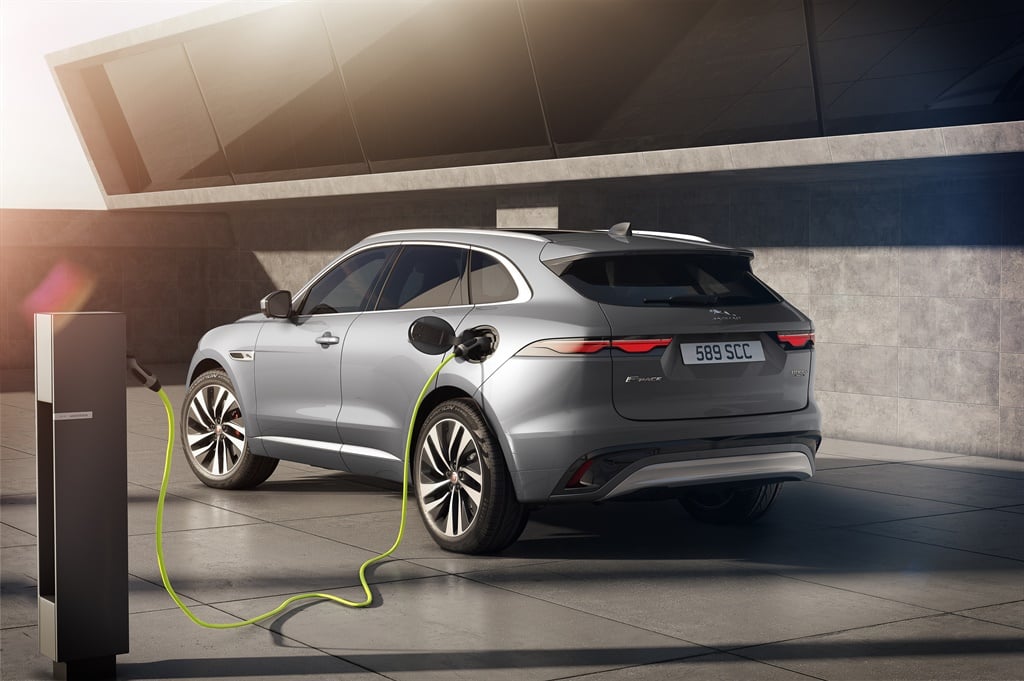 The new PHEV model dominated the discussuion, it produces a combined 297kW and 640Nm from its petrol engine and 76kW electric motor. The electric motor is powered by a 13.6kWh lithium-ion battery and assists the SUV to get from 0-100km/h in 5.3 seconds

When fully charged, the new P400e is capable of up to 53km of all-electric driving. There are S, SE R-Dynamic and HSE R-Dynamic trim levels to choose from and optional on all models is the Black Exterior Pack. The new Jaguar F-Pace is scheduled for South African launch early 2021 and pricing will be announced closer to the time.

We live in a world where facts and fiction get blurred
In times of uncertainty you need journalism you can trust. For 14 free days, you can have access to a world of in-depth analyses, investigative journalism, top opinions and a range of features. Journalism strengthens democracy. Invest in the future today. Thereafter you will be billed R75 per month. You can cancel anytime and if you cancel within 14 days you won't be billed.
Subscribe to News24
Related Links
Updated Jaguar F-Type now available: we have specs and pricing
Jaguar's next-generation F-Type could drop petrol engines and adopt all-electric powertrain
Next on Wheels24
DRIVEN | We get behind the wheel of BMW's first all-electric M car, meet the i4 M50