• The car is due in South Africa early next year.

• Three engines will be on offer: two petrol, one diesel.

On the engine front, Jaguar will fit three engines on the XF - two petrol and one diesel. The diesel model, called the D200, implements a 2.0-litre engine that produces 147kW and 430Nm. This engine has 15kW more than the unit it replaces and propels the new sedan from 0-100km/h in 7.6 seconds.

Jaguar claims a 0-100km/h of 6.1sec for the P300. All the engines are turbocharged and mated to an eight-speed automatic gearbox, which can be controlled using the steering wheel shift paddles.

Jaguar says the new XF's interior is a more dynamic space with a greater focus on the driver. A new sporty centre console, says Jaguar, comes across faster in profile and sweeps up to the dashboard; incorporating an optional wireless device charger with phone signal booster.

Jaguar's new Pivi Pro infotainment system also finds its way to the new car. This system's features, according to the automaker, is accessed through an 11.4-inch curved glass HD touchscreen. Key benefits include enhanced clarity, the screen being three times brighter, and 48% larger than the previous screen. The simplified menu structures allow drivers to access or view up to 90% of common tasks from the home screen in two taps or less.

Customers can choose from S, R-Dynamic SE and R-Dynamic HSE specification packs. Also optional on all models is the Black Exterior Pack. 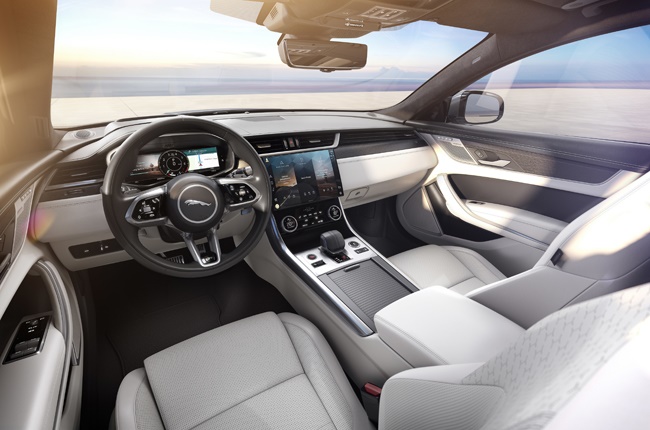 We live in a world where facts and fiction get blurred
In times of uncertainty you need journalism you can trust. For 14 free days, you can have access to a world of in-depth analyses, investigative journalism, top opinions and a range of features. Journalism strengthens democracy. Invest in the future today. Thereafter you will be billed R75 per month. You can cancel anytime and if you cancel within 14 days you won't be billed.
Subscribe to News24
Related Links
WATCH | 'I knew it was mine' - An incredible story on acquiring a 1955 D-Type Replica
Jaguar adds plug-in hybrid model to updated F-Pace range
Next on Life
FIRST DRIVE | Is this the BMW X1 we always wanted? We drive the xDrive28i in California