LONG READ | GTI TCR on the way... we rate the Volkswagen GTI, GTD and Clubsport There has been a flurry of news about Volkswagen's pride and joy – the Golf GTI.

The local arm of the German carmaker announced our market would receive 300 units of the track-focused hot hatch and that introduction of the eighth-generation model is due at the beginning of 2021.

While we wait for the new GTI to make its way to Mzansi, Volkswagen is releasing 300 GTI TCR models. The last hurrah for the seventh-generation hot hatch is a motorsport-derived model with 213kW and 350Nm from the EA888 engine.

It's set apart from every Golf 7 GTI by decals, a black diffuser, smatterings of Alcantara in the cabin and even a puddle light with the letters "TCR".

Before we drive the TCR in a few weeks, I thought it best to recap all the GTI models spawned from the seventh generation – from the Clubsport to the facelifted GTI launched in 2016 and the now discontinued GTD in between the duo.

Which one of these Volkswagen Golf models have been your favourite pick, and why? Please email us your thoughts here. We've spent a lot of time with the outgoing GTI '7.5' – 12 months. Having driven the vehicle for quite some time, it is easy to see why it's the best-selling Golf derivative in South Africa since the MkVI.

The GTI's all-round capabilities are unmatched. As an everyday performance car, there's very little that can hold a candle to it. It's the kind of car I wanted to drive all the time. As a reminder, the GTI's heart is a 2.0-litre turbocharged engine.

The 169kW and 350Nm stats are not class-leading figures and won't win your argument around the braai or a car Twitter, but for the GTI it's about the way those numbers are funnelled through to the front wheels via the tried-and-tested six-speed dual-clutch gearbox.

Our test unit was devoid of the optional dynamic chassis control. But that didn't matter. The GTI's power delivery and slick dual-clutch six-speed gearbox form a formidable combo to scoot the 1 351-kilogram hot hatch off the line. VW claimed a time of 6.5 for the German hatch to move from standstill to 100km/h.

It handles incredibly well, and its talents stretch to that of being comfortable, efficient and fast.

The interior has aged well and there are no wear and tear issues over the 12 months. The GTI's understated and refined looks are a real winner.

Yes, there are more exciting cars out there, but very few can match its all-round excellence. Not strictly a GTI of course, but the GTD deserves mention among the trio of models. In July 2017, Volkswagen SA introduced the GTD to our market for the first time and marketed it as a performance diesel.

South Africans didn't even give it half the attention the GTI gets, and it was discontinued two years later.

Powered by a two-litre turbodiesel engine with 130kW and 350Nm directed to the front wheels via a six-speed dual-clutch transmission, it had a claimed time of 7.4 seconds.

When I drove it two years ago, it's easily noted that the oil-burner is not a slouch, and it'll search for grip in first and second gear. The steering is nicely weighted and only in extreme circumstances can you cause understeer.

It feels markedly agile for a turbodiesel car in its application as a performance hatch. The six-speed DSG holds the gear nicely to extract the 130kW from 3600r/min.

The engine does make sense: powerful, torquey and economical. Is this all the Golf you need and, more importantly, does it deserve the GTD badge or is it a tarted-up 2.0-litre TDI model? To me, it felt like the latter. 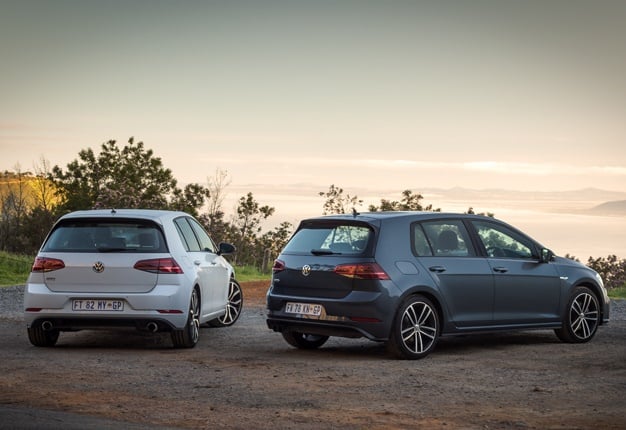 I never had an opportunity to drive the limited edition track-focused Clubsport S, but VW did have the "normal" GTI Clubsport for media to drive.

The five-door Clubsport popped in 2016 to end as a send-off to the first cycle of the seventh-generation model.

The most important aspect of this car, though, is the driving experience. The Clubsport is available with adjustable dampers and an overboost function, increasing power up to 213kW (for 10 seconds) from the standard 195kW.

The thrill of being in a sports car on some of the best roads is the ultimate dream, and the Clubsport's available power, rock solid suspension, and go-faster bits all come together harmoniously to deliver a masterful driving experience.

It's the type of car that wants to be driven hard! Chuck it into a corner and the XDS (front electronic differential lock) does a superb job of maintaining traction and ensuring there's more than enough cornering speed through every apex.

It's a marvellous system that genuinely turns the Clubsport into a sports car rather than just a regular hot hatch. The seventh-generation GTI will go down in history as one of the best performance cars in its segment. Yes, there are faster, more thrilling cars to drive.

But none of them has all the ingredients. The GTI's breadth of talent is hard to ignore. And I can't wait to have a go in the TCR and the eighth-generation next year.

We live in a world where facts and fiction get blurred
In times of uncertainty you need journalism you can trust. For 14 free days, you can have access to a world of in-depth analyses, investigative journalism, top opinions and a range of features. Journalism strengthens democracy. Invest in the future today. Thereafter you will be billed R75 per month. You can cancel anytime and if you cancel within 14 days you won't be billed.
Subscribe to News24
Related Links
WATCH | 2020 Volkswagen Golf 8 - last in line?
Next on Life
Haval's new H6 Hybrid SUV now in SA – a sensible energy solution for 'right now'