• The range comprises five models, including a hybrid.

Porsche has lifted the veil on its new Panamera.

Covering a broader spectrum, Porsche says its new car now blends performance and comfort in a far better way than before. Two models head the new range: the Panamera Turbo S and Panamera 4S E-Hybrid, with a Panamera GTS, Panamera 4, and Panamera acting as entry-models to the line-up.

In addition to the standard sports saloon body, Porsche says the new Panamera models can be ordered as a Sport Turismo or Executive with a lengthened wheelbase, depending on the drive system. Available previously as an optional extra, Porsche now offers the Sport Design front end as a standard feature. This design includes striking air intake grilles, large side cooling openings, and a single-bar front light module. 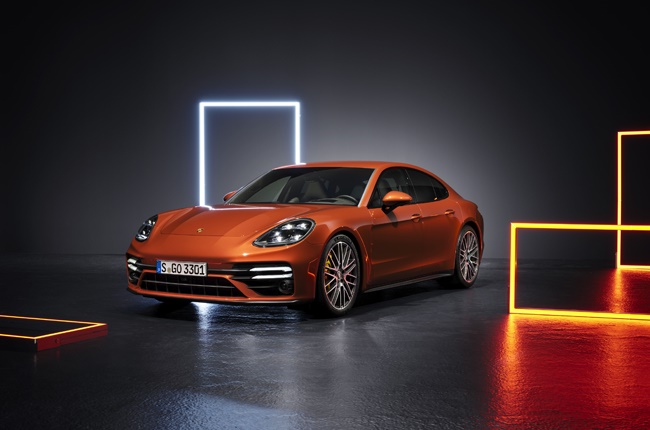 At the top of the range, the Panamera Turbo S offers 463kW and 820Nm from its bi-turbo 4.0-litre V8 engine. 0 - 100km/h takes 3.1 seconds, and top speed is rated as 315km/h. Speaking on how the Turbo S puts its power down to the road, Porsche says that it is achieved by customising several features of the car.

Porsche says in the official press release: "To transfer the enormous power to the road in a controlled manner and maximise cornering performance, the three-chamber air suspension, the Porsche Active Suspension Management (PASM) and the roll stabilisation system Porsche Dynamic Chassis Control Sport (PDCC Sport) - including Porsche Torque Vectoring Plus (PTV Plus) - have been customised to each specific model and optimised accordingly."

WATCH: 'Like blasting into a warp zone' - How it feels driving Porsche's electric Taycan

The Panamera GTS makes use of the same bi-turbo engine, but outputs are 353kW and 620Nm. Porsche says that the higher engine revolutions climb, power outputs continuously increase as you edge closer to the engine speed limit. According to Porsche, the traditional V8 sound characteristics are more prominent thanks to the new standard sports exhaust system that features asymmetrically positioned rear silencers.

The Panamera and Panamera 4 are powered by a bi-turbo 2.9-litre V6 engine that produces 243kW and 450Nm.

An eight-speed dual-clutch PDK transmission is used across the range.

The Panamera 4S E-Hybrid makes use of the same V6 engine as the Panamera and Panamera 4S but combines it with a 100kW electric motor that's been integrated into the eight-speed gearbox. For application in the E-Hybrid, the 2.9-litre engine produces 324kW, but the additional from the hybrid system increases total system output to 412kW and 750Nm.

When specified with the Sport Chrono Package, Porsche says the 4S E-Hybrid will clear 0 - 100km/h in 3.7sec and run onto a 298km/h top speed. The gross battery capacity has been increased from 14.1 to 17.9kWh. We live in a world where facts and fiction get blurred
In times of uncertainty you need journalism you can trust. For 14 free days, you can have access to a world of in-depth analyses, investigative journalism, top opinions and a range of features. Journalism strengthens democracy. Invest in the future today. Thereafter you will be billed R75 per month. You can cancel anytime and if you cancel within 14 days you won't be billed.
Subscribe to News24
Related Links
WATCH | 'Like blasting into a warp zone' - How it feels driving Porsche's electric Taycan
SEE | Porsche reveals pricing for its new 911 Targa range in South Africa
Next on Life
VW upgrades its only sedan - what to know about the stylish new Polo model