When one mentions the words 'muscle car', two - maybe three - cars pop into your mind: Ford Mustang, Chevrolet Camaro, and the Dodge Charger.

Three cars with distinct personalities, but all cut from virtually the same cloth, the muscle car cloth. In South Africa, however, we only have the Mustang to play with. Available with both a four-cylinder and V8 engine in the local market, the modern-day Mustang aims to cater to a broader audience.

The four-cylinder engine is a 2.3-litre EcoBoost unit that might irk some hardened petrol heads, but it’ll no doubt put a smile on the Greta Thunbergs of this world. This model is also the one under review and came to the office in convertible guise.

It stirred the senses in all the right ways, and one can sense that it remains true to the essence of being a muscle car. In short, the new Mustang is not the most agile of sports cars on the market, but it is one that will reward your weekend drive.

The Ford Mustang is big. It’s very big. At just under 4.8m in length, the Mustang needs quite a bit of space to fit in. Whether it is a garage or parking bay, an observant eye is required not to make a mistake. Considering that the bonnet stretches out for days in front of the driver, the Mustang needs to be pinpointed to the exact millimeter as you execute your actions from behind the steering wheel.

Giving the convertible Mustang its distinct look is a black cloth-roof. In contrast to the red paint, it creates an almost perfect silhouette that merges two of the most dramatic colours. Dropping the roof requires an interesting operation, too. Inside the vehicle, users have to unlock the roof from the windscreen frame. The process is accompanied by a loud-ish mechanical click, as if to hark back to the Mustang’s earlier days. Then press the retractor button and allow yourself to gulp in litres of fresh air.

The operation takes less than 20 seconds.

Seating for four? You sure?

Staying true to the drop-top criteria, the Mustang requires of its occupants to dip down low when clambering inside. The front passengers have a much easier task of getting in, but those in the rear have to contend with a number of challenges.

For starters, the front seats have a release mechanism on the backrest. Pull the plastic latch (hard enough), and the backrest will fold forward. Not by much, but enough. This, unfortunately, does not release the seat to move forward and backward freely. For this, users have to move the seat with the electric mechanism found on the side. It’s somewhat tedious and time-consuming, but at least it creates enough room for even small-framed adult occupants to fill the two rear seats. However, unless you have kids, we wouldn't advise putting any adults in the rear.

WATCH: Refreshed Mustang in SA - all you need to know about Ford's enhanced sports car

Another issue might arise because the front seats need to be in position again. For the driver, it can create a bit of discomfort because the rear passenger’s knees need to be considered. In this instance, with a height in access of 1.8m, the driver was virtually on the steering wheel. It is slightly uncomfortable, and it is not advisable to undertake long journeys in a compromised driving position.

Also, keep in mind that if the roof is up, it can also hinder entry and exit to the rear. 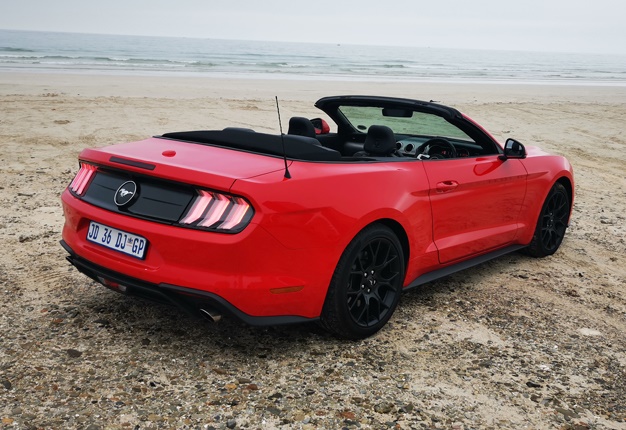 The Mustang 2.3 Convertible might fall short in the practical department, but it makes up some ground once on the move. Powered by a turbocharged 2.3-litre petrol engine, the motor produces 213kW and 441Nm. The rear-wheel drive setup allows for occasional moments of fun, but it mostly ensures that there is a level of balance to the car.

Several driving modes (Normal, Sport, Sport+, Track, Drag Strip, Snow) take care of the experience, and each one alters the characteristics of the car. In Track, for example, Traction Control deactivates automatically. In Track, Sport+, and Drag, the exhaust note deepens, and gear changes become more urgent. We found that having the car in Drag and the 10-speed automatic gearbox in Sport, adds a decent balance to the driving experience. Each up-shift is accompanied by a thud that sends your neck into the headrest.

The EcoBoost is not as intense as the V8 Mustang, but the above setup somewhat ensures that you have an inkling to what the V8 is like to drive. Albeit minuscule.

One does not buy a Ford Mustang for its looks alone, but for the heritage and history that comes with it. In the modern Mustang’s case, it has the benefit of being a looker, and it builds forth on the tradition that’s been set for the last 60 years.

It is not as fun to drive as say a German sports car, but there is enough reward in slipping in the driver’s seat and setting off. Yes, it is heavy to steer, but you can adjust the weight of the steering wheel (you can choose between Normal, Comfort, Sport). A sweeping mountain pass will highlight plenty of shortcomings in terms of driver engagement and the car’s dynamic traits, but drive to the car’s strengths and you will have a different opinion of it.

Disclaimer: The pictures were taken on a stone surface and not on the beach. This space is used as a slipway by fishermen.

We live in a world where facts and fiction get blurred
In times of uncertainty you need journalism you can trust. For only R75 per month, you have access to a world of in-depth analyses, investigative journalism, top opinions and a range of features. Journalism strengthens democracy. Invest in the future today.
Subscribe to News24
Related Links
WATCH | When the blistering-fast Ford Mustang Bullitt meets some older SA cousins
OPINION | Ford's Mustang Mach-E and the future of the Blue Oval brand's SUVs
Next on Wheels24
Volvo and Google team up for new infotainment system in upcoming XC60