• We review the Toyota Corolla Quest.

• The Quest forms part of a three-model Corolla family in South Africa.

Earlier this year, Toyota launched the new Corolla Quest in South Africa. Right off the bat, the car is a marked improvement on the one it's replacing. It has several features to make it a hit among buyers and comes in at a competitive price.

Though sedans have become an afterthought in a world inclined towards SUVs and crossovers, the Corolla Quest makes good on its promise to be affordable, well-equipped vehicle. The line-up is priced from R260 000 - R327 300, with this 1.8 Exclusive manual coming in at R316 700. It is the top-spec model in the range, second only to the Exclusive automatic.

Price is an essential factor for many buyers, especially in these trying times. And while the tag of almost R317 000 may still be too high for some, it is an undoubtedly good car that warrants consideration.

But why is the Corolla Quest such a good car? There are many answers to that question, so let's break it down. A single engine powers the Corolla Quest, being a 1.8-litre unit. The engine does without any form of forced induction and produces 103kW and 173Nm. Though the torque is available at 4000rpm, the engine feels adequately powered when the need to push on comes around.

The six-speed manual gearbox shifts over nicely and the clutch has a light touch to it. What is especially nice is that the car is not difficult to steer, and this creates a sense that you are driving something smaller and nimbler than a sedan. An area the Corolla has always been successful at was its practicality. Whether it is the standard Corolla or the Corolla Quest, the car still proved to be popular among those who wanted a versatile car. At just over 4.6m in length, the Corolla Quest is endowed with the ideal platform to accommodate up to five passengers. And rear legroom is not to be scoffed at either.

READ| Forget about calling it an appliance, the new Toyota Corolla family is everything, and more

The boot is pretty spacious, too, with the Quest boasting a load volume capacity of 452L. On the Exclusive model, owners have the benefit of increasing the load volume, because the rear seats can fold flat. This adds to the practicality of the car and gives owners an extra bit of freedom when hauling luggage. 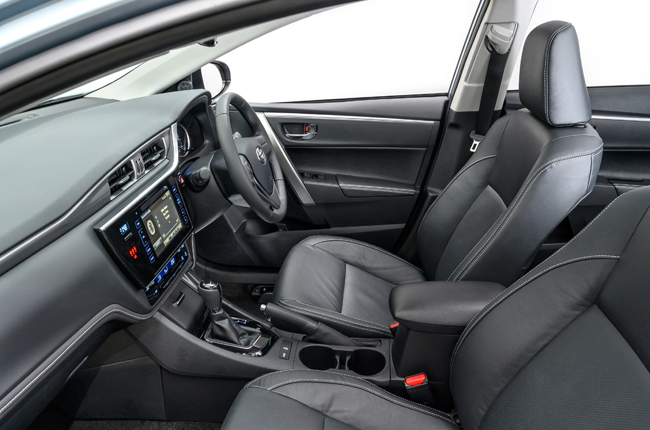 The new Corolla Quest uses the previous, eleventh-generation Corolla as the base from which it builds, but it has come into its own. By undercutting the Corolla and Corolla Hatch on price, the Quest is making several strong cases for itself.

Granted, the cabin is endowed with plastic panels, but it does not detract from how good the car is. Both the exterior and interior have unique characters, and Toyota South Africa should be lauded for producing such a #ProudlySA product. We live in a world where facts and fiction get blurred
In times of uncertainty you need journalism you can trust. For 14 free days, you can have access to a world of in-depth analyses, investigative journalism, top opinions and a range of features. Journalism strengthens democracy. Invest in the future today. Thereafter you will be billed R75 per month. You can cancel anytime and if you cancel within 14 days you won't be billed.
Subscribe to News24
Related Links
REVIEW | Despite one little gripe, could this new Toyota Corolla be the best one yet?
DRIVEN | Why Toyota has launched its new Corolla Quest with a huge price-cut on top models
Next on Wheels24
Don't like the Jeep Gladiator? Here are three double-cab 4x4 bakkie alternatives