• More than 1000 XUVs have been sold since launch in 2019.
• Vast improvement on build quality, materials easy to clean.
• One of the most frugal cars to drive.

Build quality was a massive concern when Mahindra first entered the local market several years ago. Equipment panels inside the vehicles had massive gaps in between, and the plastic felt and sounded cheap. And, the cars had a peculiar smell due to the materials which were a bit unappealing.

Fast forward a few years along with loads of well-received feedback from customers, Mahindra has taken a 180-degree turn and changed the poor perception and has now become a sought-after brand in South Africa.

The XUV300 is a good example of that. When you look inside this car, it isn't easy to believe where they've come from compared to the build quality which was seen when the automaker first launched here locally.

The automaker says it has sold over 1000 XUV300 models since it first launched here in South Africa just over a year ago, and that's an incredible feat for a brand new model in the country.

And, it's not difficult to understand why: looks have improved, build quality, improved materials and equipment, and it's not only one of the most affordable cars on the market in its segment, but also extremely frugal. For South Africans, it ticks all the right boxes. Probably the most striking feature you'll notice when you look inside this car, are the light seats; black leather is optional on another derivative. My initial concern was that my five-year-old would ruin those seats in the rear with her muddy shoes, grubby hands when she's snacking in the car during road trips, or just whatever it is that toddlers do to get their hands filthy. However, the XUV300's seats are so easy to clean, everything vanishes with a quick use of a wet wipe or cloth. I love it.

Cup-holders and little storage compartments everywhere are a charm; there are spots in the doors for water or juice bottles which are easy to reach from her car seat in the rear while the two front doors have space for two water bottle-holders in its pockets too. There's even a neat little shelf of sorts above the cubby for extra bits. 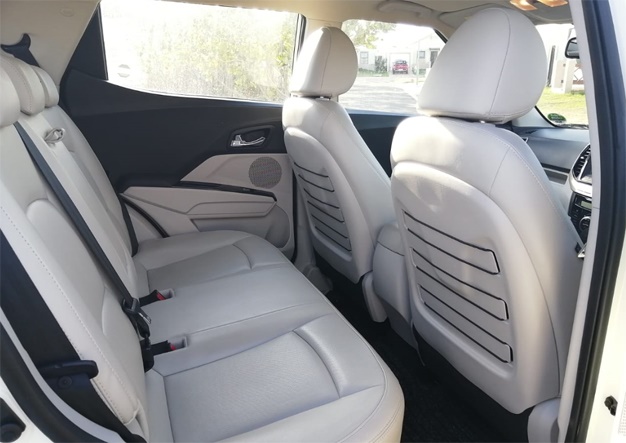 There's also the rope intricately patterned behind the two front seats which not only look intriguing and are a unique feature but also double as storage. Since the sprog loves to draw and always has a book and some colouring pens wherever we may go, this makes for an excellent spot for these items on the road, and they're easy to reach.

The boot might look small at first glance, but it actually is more than suffice. There's enough room for several items of luggage, or a big haul of groceries for an essential run to the store.

I am still taken aback at the build quality, just because the brand's equipment and materials were so incredibly poor over a decade ago. I could literally stick my finger between interior panels back then, and everything rattled and rolled when you drove. It felt like the car would fall apart when driving 100km/h. There's none of that now. My only gripe would be the insulation rubbers around the door panels are a bit flimsy, and could come loose quite easily if you're not careful. However, it slips right back in when it does happen to come apart, but it's still something that could use heaps of improvement, or perhaps some extra-strength industrial glue.

It might look bland at first, but I prefer the minimalist approach. Less is, after all, more, and it works in this car.

Janine Van der Post is the Editor at Wheels24. You can email her any car questions, or queries here.

We live in a world where facts and fiction get blurred
In times of uncertainty you need journalism you can trust. For 14 free days, you can have access to a world of in-depth analyses, investigative journalism, top opinions and a range of features. Journalism strengthens democracy. Invest in the future today. Thereafter you will be billed R75 per month. You can cancel anytime and if you cancel within 14 days you won't be billed.
Subscribe to News24
Related Links
DRIVEN | XUV300 1.5TD W8 - Could this be Mahindra's finest vehicle in their stable?
REVIEW | The Mahindra XUV300 in my driveway keeps turning heads
Next on Wheels24
SEE | Mahindra unveils new Scorpio-N SUV and it's coming to South Africa in 2023