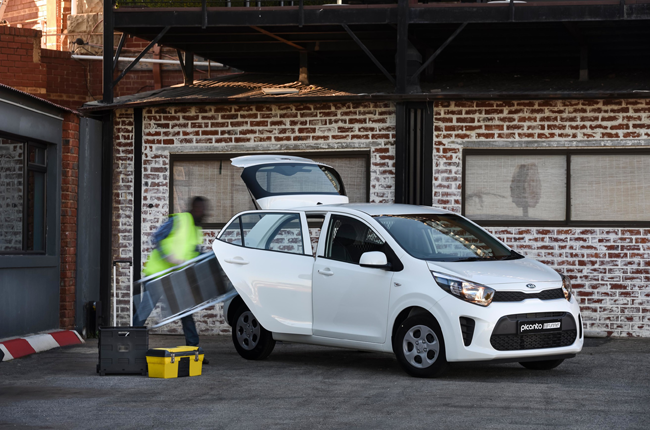 • Kia's Picanto Runner is the newest addition to the LCV segment.

• The Runner goes up against the Grandi10 Cargo and NP200.

• The Picanto Runner can carry cargo up to 350kg in weight.

A while back, Kia South Africa unleashed its new Picanto Runner on local soil. The car, based on the Picanto Start model, offers much of the same that you'd expect from the Picanto range and retails for R198 995. However, the Runner has several differentiating features from the rest of the range, and Kia is hoping that this will bode well for the model's success locally.

The Picanto family is 13 models strong, with the Runner being the latest edition. The car is powered by a 1.0-litre three-cylinder engine that produces 49kW/95Nm, with power being sent to the front wheels via a five-speed manual gearbox. Weighing a mere 952kg, the Picanto Runner is poised to be a nimble runabout in the city, where it is most likely to spend most of its time.

In terms of practicality, Kia has added metal dividers to keep cargo in place and removed the rear seats to open up 820L of loading space. And if that's not enough, the car can haul a load of up to 350kg around.

The Picanto Runner is ideally positioned for delivery companies to consider it as part of their fleet. Still, it comes up against two formidable rivals in this highly contested segment. For those unaware, Hyundai and Kia fall under the same parent company, with many of their cars sharing the same platforms and drivetrains. The Grandi10 and Picanto are the same, but the Grandi10 Cargo has been around for a slightly longer period than the Runner.

The same 1.0-litre engine does duty in the Grandi10 Cargo, but power outputs are virtually the same at 48kW/94Nm. While these two cars are cousins, the Hyundai begins to show its superiority. The payload capacity is more at 518L, load volume capacity is also more at 1202L vs. 820L, plus it weighs 40kg less than the Kia. Nissan's NP200 range consists of five models, but the entry-level 1.6i Safety Pack (R189 100) and Safety Pack with aircon (R206 100) are the ones most delivery companies would opt for. The rest of the range offer better-specified bakkies, but the next model is some R41 000 more expensive.

Taking the base model as a reference for this on-paper battle, the NP200 has the advantage of being a bakkie and boasting a far bigger loading area. It has an 800L payload capacity and a load volume capacity of 1250L. Users also have the option to add a tow bar, which will allow the hooking of an unbraked trailer weighing up to 580kg.

Power-wise, the bakkie features a 1.6-litre petrol motor that produces 64kW and 128Nm. Power is channelled to the front wheels via a five-speed manual transmission.

Are you in the delivery services? Which of these three vehicles would you consider for your needs, and why? Email us. If you are in the delivery services, the chances are that you value warranties and service plans relatively high. As such, Kia has added its Fleet Care package to the Picanto Runner. What the package entails is an unlimited km/five-year warranty, and a two-year/30 000km service plan, with services scheduled once a year or every 15 000km.

The Hyundai and Nissan also have to be serviced every 15 000km, but neither vehicle comes standard with a service plan. They do offer warranties, though. 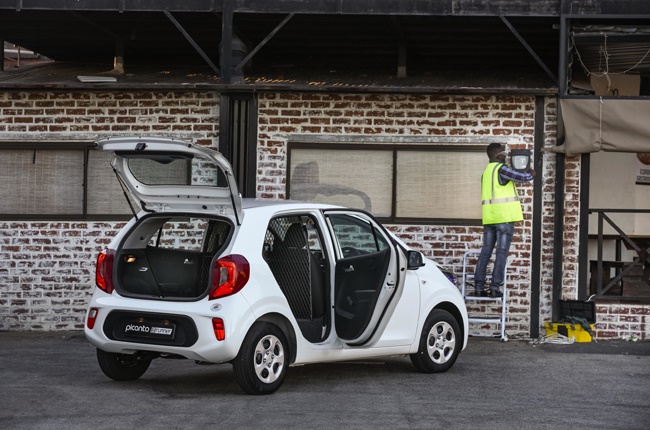 We live in a world where facts and fiction get blurred
In times of uncertainty you need journalism you can trust. For 14 free days, you can have access to a world of in-depth analyses, investigative journalism, top opinions and a range of features. Journalism strengthens democracy. Invest in the future today. Thereafter you will be billed R75 per month. You can cancel anytime and if you cancel within 14 days you won't be billed.
Subscribe to News24
Related Links
A runabout for deliveries - Kia's little city-car just got smarter with new Picanto Runner
REVIEW | Hyundai hits the right buttons with its versatile Grandi10 Cargo
Next on Life
REVIEW | The Toyota Starlet proves a winning recipe can always be improved