• We look at 10 vehicles Santa could swap out for his reindeer.

• The Toyota Supra is a special mention and would take the place of Rudolf, the lead reindeer.

The year has been challenging for most people, and within the blink of an eye, 2020 is almost at its end.

Christmas trimmings are already in full swing as shopping stores have already dusted off the decorations to get in the rhythm of the festive season.

The sharing of gifts is a big part of spreading the Christmas cheer, with many people already eyeing what to spoil themselves or their loved ones with.

Is there a car you'd replace or add to the list that we might have left out? Email us.

Santa Claus will once again be busy flying all over the world, doing his usual thing of dropping down the chimney with a bagful of presents for the good boys and girls.

His reindeers will be working overtime, but what would happen if they become unavailable or Santa decides he needs to get with the times? Here's a tasty variety of hot hatches to choose from.

According to The Sun, in traditional folklore and the 1823 poem called The Night Before Christmas, Santa Claus had a total of eight reindeer pulling his sleigh.

Initially, the verse which includes the names has them down as Dasher, Dancer, Prancer, Vixen, Comet, Cupid, Dunder and Blixem. Rudolph is a more modern inclusion.

Check out some of these performance hot hatches that can serve as more than suitable replacements in case Santa's reindeer's can't make it: There will be no problems getting from A to B in the quickest time than with Volkswagen's last model of the seventh-generation Golf, the GTI TCR.

Performance figures of 213kW and 380Nm is more than enough for one person but remember, the added weight of all the presents requires more power. The trend of 200-plus kilowatt hatchbacks continue with Hyundai's new performance kid on the block. It's power comes from a turbocharged 2.0-litre petrol engine that produces 202kW and 353Nm.

It is one of the few performance options on the market that still makes use of a manual transmission. If extra power is needed, torque will increase up to 378Nm for approximately 18 seconds when the Overboost function is used.

The Swift Sport was designed with the concept of less weight, improved aerodynamics and forced induction to provide a potent mix of speed and acceleration.

It's 1.4-litre BoosterJet engine makes 103kW and 230Nm but combined with a kerb weight of just 970kg, navigating continuous turns while keeping a constant speed is what this baby does. Power and torque is the name of the game with the Type R. The secret is the combination of VTEC technology and forced induction. Earlier Civic performance engines used to suffer from low down torque - definitely not the case here.

The track-tuned 2.0-litre VTEC turbo engine pumps out 228kW/400Nm, more than enough to carry a heavy load because with the Playstation 5 being launched in November, Santa's bag will definitely be filled to the brim. The A35 should be placed right in front of the queue. Why? Not only does it look the part but it has the benefit of ultimate grip and getting power down to the ground effectively as one of the most powerful hot hatches.

Power comes courtesy of a turbocharged 2.0-litre petrol engine that produces a strong figure of 225kW and 400Nm. With the grip of all four wheels, it does the 0 - 100km/h sprint in 4.7 seconds. Any Mini with the JCW badge means serious business and this is one reindeer you definitely want in the group. Pure unadulterated power, the same as a Golf R, is why it is no joke.

A 2.0-litre Twinpower turbo 4-cylinder engine is responsible for a power figure of 225kW and 450Nm which can be used to devastating effect on a long stretch of road. The perfect example of dynamite comes in small packages. The Abarth might be small in stature but start peeling off the layers and the true colours begin to show.

A 1.4-litre T-Jet engine in either manual or automatic trim delivers a maximum power output of 132kW and 250Nm all in a lightweight body. Talk about a pocket rocket! 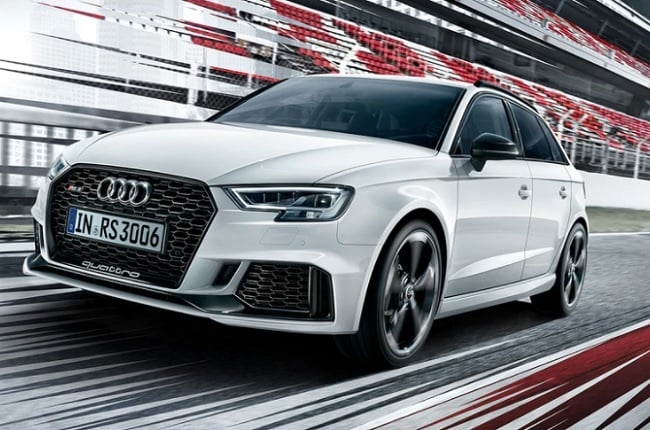 On paper, the RS is the fastest on the list with the Supra not far behind.

Under the bonnet is a 5-cylinder TFSI engine with 294kW and 480Nm, while running to the 100km/h mark in only 4.1 seconds thanks in part to its Quattro all-wheel-drive system. The extra sleigh-puller on the list is an iconic one and shares an engine with a certain BMW. It's 3.0-litre engine, fitted with a single twin-scroll turbocharger, produces 250kW and 500Nm.

Going fast in a straight line and hugging bends like the favourite aunty who hasn't seen you in a while is the Supra's bread and butter. With so many houses to visit, it is the perfect balance between agility and speed.

The Volvo XC60 is an off-the-bat special mention, but it makes a perfect vehicle for Santa. It might not be a hot hatch, nor as fast as these offerings above, but the XC60 would be inconspicuous (even though it's not) and not have anyone guessing it's actually Father Christmas in a Volvo.

The Scandinavian mid-size SUV seats not only have enough legroom in the rear for his elves or little helpers, but it has a rather spacious boot for all those presents her needs to carry around in his massive bag. The rear seats fold flat, and if he wants, Santa could opt for the option that make the seats fold down electrically when he needs to make even more room in a hurry. We live in a world where facts and fiction get blurred
In times of uncertainty you need journalism you can trust. For 14 free days, you can have access to a world of in-depth analyses, investigative journalism, top opinions and a range of features. Journalism strengthens democracy. Invest in the future today. Thereafter you will be billed R75 per month. You can cancel anytime and if you cancel within 14 days you won't be billed.
Subscribe to News24
Related Links
WATCH | Here's why Christmas is such a struggle for these petrolheads
WATCH | This hilarious video shows how to decorate your car for Christmas the right way
Next on Life
Ford's new Ranger launches in SA: Here's how its competitive pricing compares with Toyota's Hilux