• The below list consists of two SUVs and one sports car.

• Three cars are from Japan and one from America.

These days, you don't see as many vehicles that are powered by naturally-aspirated (N/A) engines anymore. Sure, you get turbo-less four-cylinder engines, but increase the number of cylinders and the engine has a forced-induction unit bolted on.

Six-, eight-, ten- and 12-cylinder engines are more than likely to be turbocharged, but there are still a few remaining 'dinosaurs' living among us. We scoured through the South African carpool and found four N/A V8 vehicles living among us.

Three are from Japan and one from America.

The LC500 is one of the most beautiful coupés yet, and it is a stunner wherever it goes. Whether it's parked at your nearest shopping mall or patrolling one of the quaint towns in the Cape Winelands, this is one Lexus you will never miss.

Though it has seating for four people, the rears are more suited to small children and only for short distances. Even so, the coupé has eight airbags and rides on 21-inch wheels. In 2021, a convertible will join the one-model range.

READ: Lexus' new LC 500 Convertible could possibly be the most beautiful open-top car yet 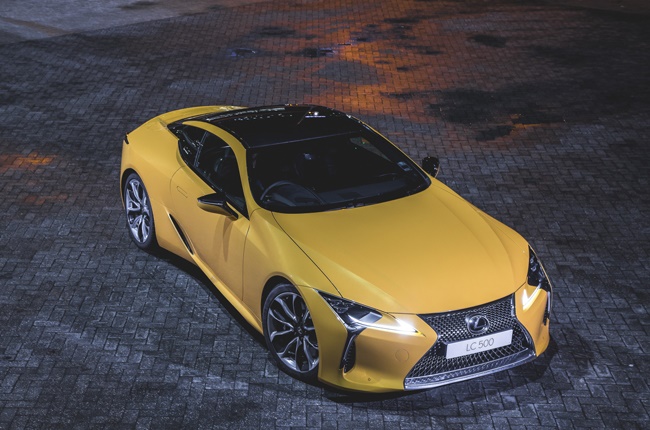 The Lexus LX range consists of two models, both powered by V8 engines. The 4.5-litre diesel engine is turbocharged, but the petrol unit not. The 5.7-litre engine produces 270kW and 530Nm, available at a respectable 3200rpm. The LX sends its power to all four wheels via an eight-speed automatic gearbox.

Performance-wise you are looking at a sprint time of 7.7sec and a 210km/h top speed. The refreshed Patrol came to market in 2017 and is endowed with a capable off-road system and several technologies to make it relevant in a highly-competitive luxury SUV market. The Mustang is as part of the automotive world like air to our existence. Since 1964, the Mustang impressed and astounded, and all the while it retained its naturally-aspirated engine. The current Mustang came to market in 2015, but last year the famous sports car received a comprehensive update. Though the entire range was now fitted with a 10-speed automatic gearbox, the biggest news was the addition of Bullitt model that makes use of the same 5.0-litre V8 engine as the Mustang GT.

In both the GT and Bullitt, the engine produces 331kW and 338kW, respectively, but torque remains unchanged at 529Nm. Whereas the GT's engine is mated to an automatic gearbox, the Bullitt makes do with a six-speed manual unit. 2020 Ford Mustang Bullitt (QuickPic)
We live in a world where facts and fiction get blurred
In times of uncertainty you need journalism you can trust. For 14 free days, you can have access to a world of in-depth analyses, investigative journalism, top opinions and a range of features. Journalism strengthens democracy. Invest in the future today. Thereafter you will be billed R75 per month. You can cancel anytime and if you cancel within 14 days you won't be billed.
Subscribe to News24
Related Links
Lexus' new LC 500 Convertible could possibly be the most beautiful open-top car yet
REVIEW: Nissan's beastly Patrol V8 driven
Next on Life
REVIEW | The Toyota Starlet proves a winning recipe can always be improved