• Bentley has handcrafted 20 000 Bentayga SUVs.
• The all-new Bentayga II has more assertive styling, and comes fully-loaded with technology.
• First models will arrive in South Africa as soon as November 2020.

Luxury brand Bentley has unveiled its second-generation Bentayga SUV as it's the first vehicle under its new Beyond100 business plan strategy on Tuesday (30 June).

The global virtual debut was streamed live to media all across the world from an idyllic country garden with lush, trimmed green lawns, and the sound of chirping birds just down the road from the automaker's headquarter operations in Crewe, England.

Beside the garden lounge, two stately models were revealed under a white marquee in Rose Gold and Alpine Green to display its new looks and features.

Launched in November 2015, the automaker has just handcrafted its 20 000th Bentayga, a number vastly surpassing any of its competitors. Bentley has been the pioneer of the world's most exotic brands to create an SUV, and at the time, the new model was the most powerful, fastest, and most exclusive SUV in the world. The new model will certainly ride on the wave of success of its predecessor. 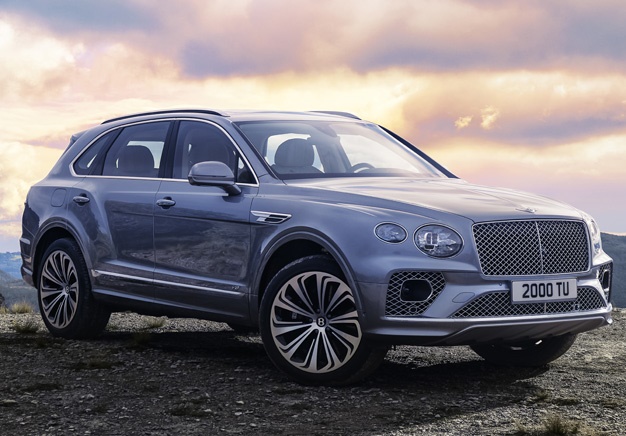 It performs even more like a supercar with the formidable off-road capabilities, says Bentley. And, having driven the previous model not that long ago, there are no fibs about that claim. What's even more surprising is that the Bentayga is not just an urban SUV in the UK, according to the automaker, the vast majority of their customers use these cars as every-day vehicles putting on high mileage, and using it for every occasion.

The brand new vehicles start making their way to European dealerships this week which means first owners will be driving their new SUVs as soon as next week.

While the larger European, Japanese and American markets will receive the next-generation vehicles first, Bentley South Africa says local owners will take delivery as soon as November 2020 when the SUVs arrive here. Under the bonnet is Bentley's proven 4.0-litre, 32-valve dual twin-scroll turbocharged V8 petrol engine mated to an eight-speed automatic gearbox. The V8 delivers supercar performance, developing 404kW and 770Nm, with a claimed top speed of 290km/h, and a sprint time to 100km/h in just 4.4 seconds.

It has a 639km driving range, with CO2 emissions of 302g/km. Fuel consumption is rated at 13.3 litres/100km in a combined cycle due to the engine's ability to de-activate four of its eight cylinders in suitable conditions without compromising the drive.

Bentley Motors chairman and chief executive Adrian Hallmark says the Bentayga II signifies the movement of the brand as the new SUV is introduced to new markets and new target audiences.

Hallmark says: "With the new Bentayga, we're repositioning the pinnacle of the luxury SUV segment to be even higher, even further away from the competition. We've listened to our customers and made improvements to the areas most important to them. The new Bentayga is a thoroughly modern and beautiful extension of the original car's abilities and achievements." The next-gen model sees a redesigned front and rear end - the latter which might need some acquired taste. There's much focus on the crystal-cut headlights, with 45 LED bulbs in each, but the rear lights add a new dimension to the vehicle which completely derails its stately stance of which it is so well-loved for. I wonder what the Queen would think of that fresh, modern look in the rear.

Having driven the previous model, I remember how my driving partner and I felt as if we were professional drivers for her Majesty in the sophisticated vehicle. By the sounds of all the new upgrades, I think next time around we'll feel like we'd need to be leading the royal brigade as a sweeper vehicle with a lot more bumptiousness.

While the SUV's length remains the same, Bentley says the new model appears visually longer due to elongated bonnet which is also now lifted, adding to its more assertive stance. It is also has a 20mm wider rear track, adding to its proportional effect. Despite the rear not matching its front styling (in my opinion), there has been a significant transformation, with a total redesign of the rear surfaces including a new full-width tailgate with the new encapsulated lights. And I am sure if I see it in the metal, I'd probably change my mind or get used to those rear lights pretty soon. The licence plate has been moved down into the bumper for a cleaner appearance while wider, and split tailpipes ensure this isn't just a pretty SUV but a powerful beast. A wider track also repositions the wheels in their arches to improve the car's visual appeal, along with new, unique Bentley wheels. Inside the magical palace

Much has been done inside the SUV, and not just a significant upgrade on modern technology. New materials are much more sustainable and just exquisite, even on images.

There is a new centre fascia which is a lot more digital than before; other niceties include a new steering wheel, new door trims and brand-new seats. The latter is now available with ventilation in the rear of the five-seat cabin option, says Bentley. Depending on the configuration rear passengers choose, there's up to 100mm more legroom - a substantial figure in terms of space.

You could spec your luxurious interior with dark tint diamond brushed aluminium trim, as well as two straight-grained veneers: Koa and Crown Cut Walnut. The Mulliner Driving specification adds a new quilting design, and micro piping detailing is a new option for the seats.

Chris Cole, Product Line Director, says: "With the new Bentayga, our objective was relatively straightforward – to take the best and make it even better.

"The new Bentayga reflects the truly sophisticated qualities and design make-up of other members of the Bentley family. It was already the pinnacle of the luxury SUV sector, but now we have taken it even higher." A next-generation infotainment system is integrated into the handcrafted, Bentley' wing' dashboard and features a 10.9-inch display screen with ridiculously super-high definition graphics.

The latest hardware and software bring navigation with satellite maps, online search and other features. Wireless Apple CarPlay is standard, along with Android Auto (market dependant). Rear seat occupants benefit from the introduction of a new, larger touchscreen remote control tablet, similar to that introduced in the all-new Flying Spur.

Connectivity around the car has been significantly improved, says Bentley. This is done via USB-C data ports and a wireless phone charger which is also now standard. Each new Bentayga model comes with an embedded SIM meaning My Bentley connected car features no longer require customers to provide their own data connection.

We live in a world where facts and fiction get blurred
In times of uncertainty you need journalism you can trust. For only R75 per month, you have access to a world of in-depth analyses, investigative journalism, top opinions and a range of features. Journalism strengthens democracy. Invest in the future today.
Subscribe to News24
Related Links
Bentley's new 466kW Bentayga Speed is the world’s fastest production SUV
WATCH: The Bentley Bentayga V8 shows you why the luxury vehicle can be taken off road
Next on Wheels24
The ultimate Porsche you can't buy in real-life, but can own in Gran Turismo on PS5