A few years ago, while still a freelance motoring scribe, I managed to secure one of the finest drives of my career.

It was so special that I still can't believe it actually happened.

The experience from behind the steering wheel of a McLaren 570s Spider was so visceral and raw, that, to this day, it's difficult to forego.

The 570s Spider left an unshakable impression on me.

Not because it was fast and had the looks of a proper bedroom wall poster, but because the entirety of the package came together to form one of the purest cars on sale in South Africa.

And what also made this car so special is that, despite it being the 'entry-level' McLaren, it offers supercar-rivaling performance. When one looks at the 570s Spider, it's easy to assume it to be an exceptionally fast car. This might not come as a shock, but it is. Though supposed to be the smallest sibling in McLaren's range of cars, the Spider can run with the very best the automotive world has to offer. Powering this sweltering piece of machinery is a turbocharged 3.8-litre V8 petrol engine that develops - wait for it - 419kW and 600Nm of torque. It's a ton of power this, but it gifts the McLaren astounding levels of punch and performance, with virtually no turbo-lag whatsoever.

The 570s, part of McLaren's Sport Series, is the successor to the 650s, which in turn, was the successor to the legendary MP4-12C. So it is only fitting, then, that both the hardtop 570s and the Spider offer insane levels of performance to accompany the looks. And here's where it gets scary.

Weighing only 1500kg when fully fuelled and with two passengers on-board, the Spider will clear the 0-100km/h sprint in 3.2 seconds. Six seconds later, and you're past 200km/h! It's insane how ridiculously easy it is to hit those speeds, but there was no way that McLaren's claimed top speed of 328km/h was going to be put to the test. Just… nope.

The car stands a mere 1.2m high in its boots, but it's the ground clearance of 93mm that will put your nerve to the test. 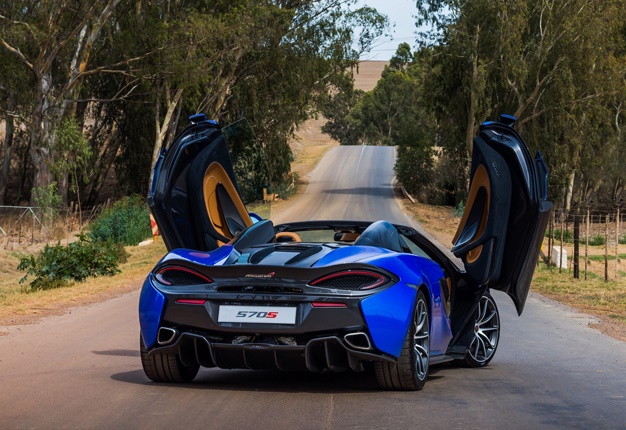 Though the 570s Spider is quite comfortable in the city - or as comfortable as a supercar can be - it will not be enjoyed most for what it has to offer. Prodding along will be more rewarding for onlookers, but on a racetrack, it will serve a greater purpose to the driver/owner. And if you can't get to a track, quiet backroads or a mountain pass will serve just as good a purpose; which is what this McLaren had to contend with.

Pushing on gently out of Cape Town and away from the bustling traffic, the Spider was ready to stretch its legs. With the Handling dial switched into normal and the Power dial in sport (there are normal, sport, and track modes), the McLaren offers blistering performance without an overly hard suspension. The car moves, rocketing through its seven-speed automatic gearbox! The 570s Spider unleashes relentless attacks on the horizon as the 3.8-litre engine screams at full tilt, the sound bouncing off the hills and valleys, spurring you on to explore the car's limits.

The suspension, though in its softest setting, retains some of its stiffness to credit the car with assured dynamics. Steering is best described as alive between the driver's hands as car, road, and pilot communicate as one. Despite the power being sent to the rear wheels only, the positioning of the engine on top of the rear axle helps keep the back from sliding out.

It has no end, this 570s Spider. It continues to build momentum and speed as inclines are scaled in what feels like lightning speed. And when it comes time to call a halt to proceedings, the carbon-ceramic brakes offer ample stopping power to bring things back to the real world. 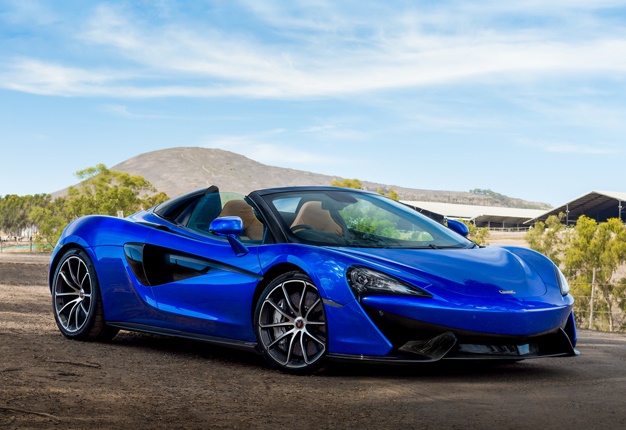 This is not just a car; it's an experience. It's a symphony of elements coming together for a moment's enjoyment that far outweighs the best roller coaster in Cape Town. Perhaps even Johannesburg! It's a car that stirs the soul with its sonorous exhaust note and powerful engine.

The McLaren 570s Spider is not just a car made for a fleeting moment's fun. It's designed for almost-unrivaled driving dynamics while at the same time taking its driver to motoring nirvana.

The experience still resonates within me. McLaren 570s Spider. Image: Warren Wilson
We live in a world where facts and fiction get blurred
In times of uncertainty you need journalism you can trust. For only R75 per month, you have access to a world of in-depth analyses, investigative journalism, top opinions and a range of features. Journalism strengthens democracy. Invest in the future today.
Subscribe to News24
Related Links
This fiery Mclaren 570S Spider is ready for a true romantic on Valentine’s Day
Next on Wheels24
Why engine output never matters - in a Ranger Raptor SE bakkie, and everything else you should know