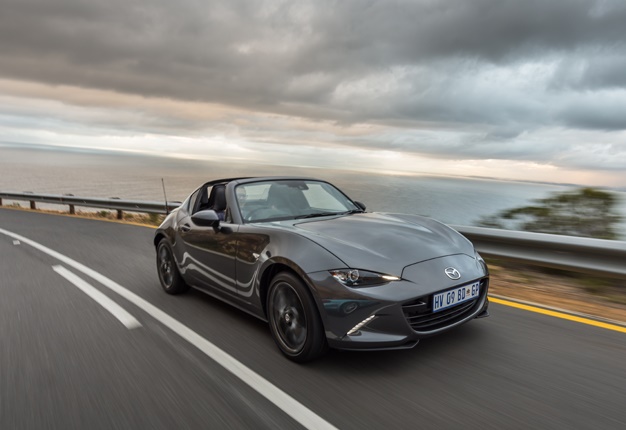 • The Mazda MX-5 is the world's best-selling roadster

• A cloth roof is no longer available

• The automatic gearbox is not as indulging as the manual

When the topic of roadsters come about, one of the first cars to spark conversation is the Mazda MX-5. Having come to market in 1989, the car has gone on to become a global best-seller. It outlasted rivals such as the Honda S2000 and continues to form part of Mazda's current product portfolio.

Up until a few years ago, the MX-5 was available with a cloth roof and six-speed manual gearbox, but buying trends and a changing consumer forced the automaker's hand to drop that model and only focus on the hard-top automatic version.

Purists were aggravated at this happening because the MX-5 is a driver's car. It was the very manual gearbox that made it such a hit and why it was such a joy to drive.

Few cars can turn their mechanical prowess into formidable machines that reward you after every drive. The MX-5 did it, but that automatic transmission does have its shortcomings. And it's worrisome.

While the MX-5 is not the most practical car in the world, it is one of the most fun. And the recipe is simple: engine up front, gearbox in the middle, and drive sent to the rear wheels. It all comes together nicely, and you can't help but feel glued to the driver's seat.

That's with the manual gearbox. The automatic version does things mostly the same, but you'll often find your left hand wanting to change gears. There are paddles behind the steering wheel, but it's not the same. You are not as connected with the car as with its manual counterpart.

The MX-5 was also never about speed; hence its naturally-aspirated 2.0-litre engine produces 118kW and 200Nm. In this 1126kg body, 0 - 100km/h takes 8.6 seconds and top speed is 194km/h. It's not fast, and you can feel it, but in the manual you didn't pay much attention to it. Why? Because you had the benefit of truly engaging with one of the best sports cars on sale. Ever! As with all things, change came the MX-5's way, and Mazda had to make a decision: retain the manual or drop it. They chose the latter and only gave us the auto. To a degree, it makes sense, because the car does not sell in such vast numbers anymore. Especially here in South Africa. Mazda is lucky if they managed to move one or two models off showroom floors a month, and that's nationally!

As the automotive world is opting for automatic gearboxes over manual ones, the MX-5 also met the same fate. Given that the car sells in such low volumes, the average consumer will only be concerned about acquiring a car that's different from the norm.

The rest of us, however, will hope that one day, the manual gearbox will find its way back to one of the most fun cars ever made. 2020 Mazda MX-5. Image: Warren Wilson
We live in a world where facts and fiction get blurred
In times of uncertainty you need journalism you can trust. For only R75 per month, you have access to a world of in-depth analyses, investigative journalism, top opinions and a range of features. Journalism strengthens democracy. Invest in the future today.
Subscribe to News24
Related Links
Open-letter to all Moms: If I had the means, I'd buy you one of these sub-R700k convertibles
WATCH | Why this reader prefers his old 'happy' Mazda MX-5 over the latest hard-top version
Next on Wheels24
REVIEW | 2021 Kia Pegas proves to be the right car, for just the right time in SA