Tracing the AMG GT Black Series' lineage: How the range matured over the last five years

• GT Black Series has been five-years in the making.

Mercedes-Benz, along with its sports division, AMG, is no stranger to building sports cars and the GT range, introduced in 2015, is the next chapter in this storied tale.

But the GT finds its roots in the SLS Gullwing of a decade ago. Produced between 2010 and 2015, the SLS was the spiritual successor to the legendary 300 SL Gullwing, but the direct replacement for the Mercedes-Benz SLR McLaren. When production on the SLS ended, Mercedes-AMG already had a succession plan in place, that being the GT.

The new sports car did away with the brutal 6.2-litre V8 engine of the SLS, which, at the peak of its use, produced 464kW and 635Nm in the SLS AMG Coupé Black Series. Instead, it adopted the new V8 engine in compliance with emission requirements and calls for sports cars to be 'greener'. As if the SLS AMG Coupé Electric Drive wasn't comforting enough…

Nevertheless, the new GT arrived, and it heralded a new era for the Three-pointed Star. 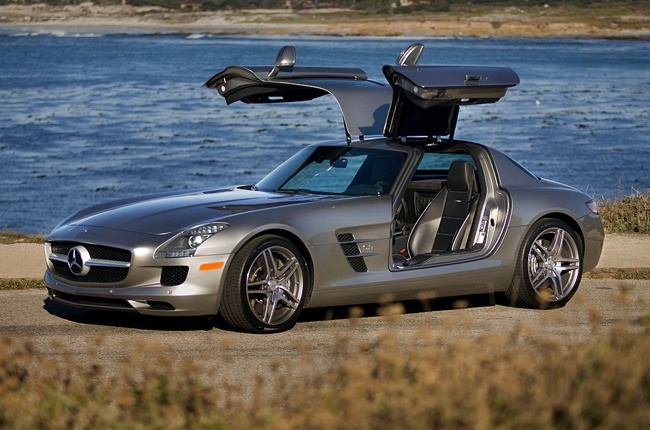 Having been revealed a few years before its official launch in 2015, the GT impressed with its smooth lines and purposeful design. Of course, the big news was the engine that produced, at introduction, 340kW and 600Nm. Thanks to the bi-turbocharging, power delivery was more intense and throttle response far more direct.

Of course, the smooth and linear power delivery of the naturally-aspirated engine of the SLS was sorely missed, but it soon became a distant memory once the GT began showing its colours. 2017 was a big year for the GT range, with four models joining the family. On the coupé front, the GT R and GT R Pro arrived and sported a 430kW/700Nm version of the 4.0-litre engine. These were, and still are, massive numbers that allowed this rear-wheel-drive sports car to go from 0-100km/h in 3.6 seconds and onto a 318km/h top speed. The GT R was also dubbed the 'Beast of the Green Hell' because it set such a blistering time around the fabled Nürburgring in Germany.

Two Roadsters also joined the range, that being the GT and GT C Roadsters. The GT produced the same amount of power as its coupé sibling, but the GT C made do with 410kW and 680Nm. In 2018, Wheels24 reported on the GT C Roadster alongside the McLaren 570s Spider.

A new era dawned on the GT when a four-door version went into production in 2018. The GT 4-Door Coupé was available in two variants: a GT 53 and GT 63 S. The 53 is powered by a 3.0-litre in-line six-cylinder engine that produces 320kW and 520Nm. Combined with an electric motor, it can run onto a top speed of 285km/h. The 63 would go on to become the most powerful model in the GT range to date, with an astonishing 470kW and 900Nm churned from its bi-turbo engine. The GT 4-Door 63 S Coupé was, in essence, a placeholder for the GT Black Series. When the range was first introduced five years ago, talk of a Black Series was rife. It may have taken half a decade for it to arrive, but it does not detract from the excitement around the car.

Pushing out 537kW, this is the most powerful version of the engine in any of Mercedes' product cars, thanks to technologies and parts stemming directly from the AMG GT3 race car. The end result is a car that, in addition to its power output, delivers 800Nm of torque in a wide band between 2000 and 6000rpm. Put your foot down, and the car needs only 3.2sec to reach 100km/h from standstill, and 200km/h in under nine seconds. Top speed is 325km/h.

Power is sent to the rear wheels via a seven-speed dual-clutch automatic gearbox.

Tobias Moers, chairman of the board at Mercedes-AMG, who is heading to Aston Martin, said: "I am proud of the team who have created a unique super sports car, which now represents the absolute peak of our successful GT family. The performance, looks, and driving dynamics of the GT Black Series are second to none. This project was a fantastic end to my work at AMG, for which I am truly thankful." We live in a world where facts and fiction get blurred
In times of uncertainty you need journalism you can trust. For 14 free days, you can have access to a world of in-depth analyses, investigative journalism, top opinions and a range of features. Journalism strengthens democracy. Invest in the future today. Thereafter you will be billed R75 per month. You can cancel anytime and if you cancel within 14 days you won't be billed.
Subscribe to News24
Related Links
How on-track successes gave birth to Mercedes-Benz's timeless beauty, the 300 SL Gullwing
Next on Life
These are all the cars Toyota is bringing to SA in 2023, and its new Urban Cruiser is a stunner!