Earlier this year, Hyundai launched its highly anticipated i30N in South Africa. It is the Korean automaker's answer to the formidable Volkswagen Golf GTI and Renault Megane R.S. At the launch, the car impressed both on track and public roads as it put its power down with menace and surety.

Finally, after months of waiting and enduring the mandatory lockdown and almost two months without any cars coming in for review, the i30N arrived in the Wheels24 garage. While we knew from the launch what to expect from it, it was a given that the car would be taken on an extended drive over three mountain passes around Cape Town.

As soon as the weekend arrived, we were ready for the 200km drive - starting with Clarence Drive just outside Gordon's Bay.

Do you think the i30N is a good rival to the Golf GTI? Email us. Clarence Drive is one of the most beautiful roads in all of South Africa and the most beautiful part of the R44. Snaking between Gordon's Bay and Rooi Els, the 20+km road offers blissful views of both the sea and the ocean. And yes, it carries a lot of traffic. Fortunately, thanks to the rain the night before, the road was relatively quiet and could one explore the Hyundai's limits.

Hyundai is adamant that its i30N is one of the best front-wheel-drive cars on the market, so it was only fitting that we put the claim to the test. Clarence Drive offers lots of hard-braking points, and sections where one can accelerate quickly before hitting the brakes again. It tests a car's stability under braking, as well as unearthing any hints of understeer. It's a very technical road, but a proving ground of note; much like Franschhoek Pass.

The i30N had no trouble tackling the demanding twists and turns this coastal road dished up. The engine kept spinning in its sweet spot, and the rev-match technology ensured that the correct engine revolution accompanied each downshift. Once in Rooi Els, N-mode is switched for Eco mode, prodding along calmly towards the next pass. 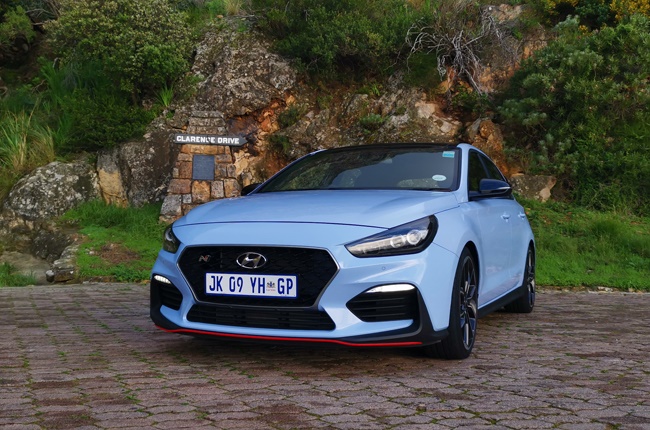 The next 100+km was towards the Franschhoek Pass. Passing Rooi Els, Betties Bay and Kleinmond, we turn the i30N's nose left towards Botrivier, followed by a right towards the N2 before rejoining the R43 direction Villiersdorp. It's a peaceful drive, with the occasional truck being overtaken on this almost desolate road. In Eco mode and sixth gear, the i30N retained its speed with the cruise control set and adjusted to the various speed limits.

In Villiersdorp, we make a left towards Franschhoek and after a few kilometres a right towards the next destination via the pass.

READ: Dear petrolheads, here's why you're allowed to consider the Hyundai i30N over a Volkswagen Golf R

This road is not for the faint-hearted, and it asks complete commitment from car and driver. Push too hard, and you could find yourself in the ravines below. Turn in too tightly, and you could slit your tyres on the broken edges of the tar road. You need to know your story on this road, otherwise…

With N-mode re-engaged, the i30N releases all its 202kW and 353Nm. The 2.0-litre engine's turbo whales as the rev limiter is chased. The manual gearbox travels between gears, with pops and cracks accompanying every move of your left hand over the short-throw gear lever. Hints of understeer want to creep in, but a quick scrub of speed rectifies the matter.

If you know this pass and you have the right car for the job, it feels like a dance between you, machine, and road. Every corner is blended beautifully with the next, and it's a reward almost without peer. After spending a few minutes in Franschhoek enjoying a coffee in one of our favourite spots, it's time to hit the road again towards the last pass. Cruising out of Franschhoek, the i30N was comfortable in Eco mode. Pushing through Pniel and its just-know-that-I' m-here speedbumps, the Hyundai was finally ready for its last challenge.

Helshoogte is not as technical as either Clarence Drive or Franschhoek Pass. Instead, it offers long, swooping bends. You never have to tug on the steering wheel, just let the car glide into a corner.

It was a constant travel between fourth and fifth gears as the i30N traversed up the mountain and down again. N-mode stiffens the steering wheel, eliminating any lightness that could deter confidence. While the other two passes each brought out a strong point in the car, Helshoogte showed that the i30N could carry good amounts of speeds through a corner - without coming unhinged or running out of talent.

The Hyundai i30N is an impressive car, with all-round attributes that make for a good hot hatch. Hyundai's first attempt at the hot hatch game is an impressive one, and it's a car that can rival its very established rivals. 2020 Hyundai i30N. Image: Wheels24 / Charlen Raymond
We live in a world where facts and fiction get blurred
In times of uncertainty you need journalism you can trust. For 14 free days, you can have access to a world of in-depth analyses, investigative journalism, top opinions and a range of features. Journalism strengthens democracy. Invest in the future today. Thereafter you will be billed R75 per month. You can cancel anytime and if you cancel within 14 days you won't be billed.
Subscribe to News24
Related Links
Dear petrolheads, here’s why you’re allowed to consider the Hyundai i30N over a Volkswagen Golf R
DRIVEN | Hyundai has launched its highly-anticipated i30N in SA, but is it worth R680 000?
Next on Life
Still don't know how to pronounce Nissan's Qashqai? Never mind, it's back and looks better than ever