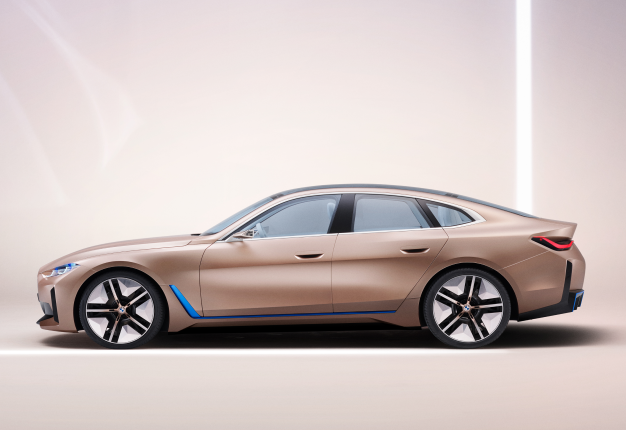 BMW has unveiled its first practical electric model, the i4 concept. Due to enter production in 2021, the i4 is based loosely based on the upcoming 4 Series Gran Coupe and also features a four-seat layout, sloping roof line and the new vertical slat kidney grille.

The i4 is the third model in BMW's i-range, joining the i3 city car and i8 sports car which ends production in April of this year. The i4's aim is to blend dynamic driving traits, sporty design and spaciousness into a sedan that produces zero carbon emissions, says BMW.

Adrian van Hooydonk, senior vice president of the carmaker's design arm, says: "The BMW Concept i4 brings electrification to the core of the BMW brand. The design is dynamic, clean and elegant. In short: a perfect BMW that happens to be zero emission."

Power is sourced from a rechargeable electric battery located on the car's floor, the high-voltage battery uses fifth-generation eDrive technology. It generates a maximum output of up to 390kW.

Crucially, BMW says the i4's power source has an energy content of 80kWh and has a range of 600km in the WLTP cycle, the battery weighs around 550kg.

A 0-100km/h sprint time of four seconds is quoted. The sound of the i4

Because electric cars are silent when they're on, BMW has developed a unique sound for the i4. It was developed under the brand name of 'IconicSounds Electric' by world renowned composer Hans Zimmer together with BMW's sound designer Renzo Vitale.

The sound of the Concept i4 achieves this to perfection says BMW – it combines the carmaker's past and future. It gives the driver the feeling that there are no limits of expression.

The sound is manifold, surprising and it provides a sense of lightness and transparency. The sound worlds of the Concept i4 range from the driving sounds in "Core" mode to the more intense and pronounced sounds of "Sport" mode. Also included are the sounds of the door opening and the starting scenario. We live in a world where facts and fiction get blurred
In times of uncertainty you need journalism you can trust. For only R75 per month, you have access to a world of in-depth analyses, investigative journalism, top opinions and a range of features. Journalism strengthens democracy. Invest in the future today.
Subscribe to News24
Related Links
WATCH | Dr Esther Mahlangu adds her Ndebele touch to a bespoke Rolls-Royce Phantom
WATCH | BMW M8 Competition vs M5 Competition
Next on Wheels24
8 most expensive (mostly hot) hatchbacks to buy in SA's new car market