• The Taycan is Porsche's first electric sportscar.
• Local pricing for the range starts from R2 562 950 for the Taycan 4S, up to R4 002 980 for the monstrous Taycan Turbo S.
• It is the first production vehicle with 800-volt technology.
• For more motoring stories, go to www.Wheels24.co.za

Speed, the sound of burbling V8 engines reverberating down my spine, and the smell of petrol have always made my heart race. Never would I think a silent, electric sportscar would tame my revving heart. Today, the new Porsche Taycan did just that.

"What's the fastest car you've ever driven?" - that's the question I was asked every single time anyone heard I was a motoring journalist as my career began almost 20 years ago. As time passed, I settled for a quick answer: the fastest I had driven a vehicle - in a controlled environment, of course, just to give a monotonous response.

The car that kept the title for many years was the Nissan GT-R, until earlier this year when the Lamborghini Huracan EVO dethroned it. Fast cars no doubt, but they're insanely loud; the grunt of the exhaust as these cars pick up speed, or that sonorous roar when blipping down the gears that make you giggle like a child. How could anything ever replace that feeling? If you've ever driven a hybrid or electric vehicle, you'll know that starting one and pulling away, would be a silent affair. You double-check if the car is on, most times turning it off, and on again because it's that quiet. Right, no big deal, we've done this before. Many of SA's motoring media have been privileged to drive the electric vehicles available locally like the Nissan Leaf, BMW's i3, or the superfast SUV from Jaguar, the I-Pace.

But this was no ordinary launch for so many reasons; for one, it's the first car launch in five months since the Covid-19 pandemic brought a halt to any new model events. It was also the first time seeing any of my motoring family. There were no hugs, and we were barely a handful of peers, and sanitising was, of course, the order of the day.

The Taycan is probably the most anticipated new car of the year until the Golf 8 GTi arrives at the end of 2020, but I was in for the drive of my life.

Despite the high pricetag, would you consider driving an electric sportscar like the Taycan? Please email us. We won't spare you all the technical nitty-gritty details in this story; instead, I just want to share the experience and exactly how it felt.

I had read my peers' social media posts about just how fast the Taycan is; how launch control would violently throw you into the back of your seat and leave you gasping for air.

"This car is very quick; if you're going to overtake, don't hesitate." Those were the parting words from the Porsche team who introduced myself and a couple of motoring peers in the first car launch since lockdown under strict protocols.

We headed off on the 200km driving route for the day but had four hours to do so, factoring in some photo time. That might seem like a lot of time to get into too much trouble. However, you have to consider the harder you drive, the faster the driving range will run out, along with your battery power - especially when you're doing more peddling than giving the vehicle a chance to use its regenerating braking system.

The Taycan is rapid, and it's scary. Scary because it bolts from zero to 100km/h faster than you can think about what to cook for supper in the evening, just 2.8 seconds. It has 460kW of power on tap from the get-go, and 560kW combined with the overboost, along with a ridiculous 1050Nm of torque are instantaneous, and before you know it, the clock is reading far beyond the road limits when it feels like you're only cruising at a comfortable 100km/h. It has a two-speed auto transmission on rear axle, and one-speed on the front.

It's frightening because the car is so planted on the road, at such high speeds, it's silence is almost eerie. 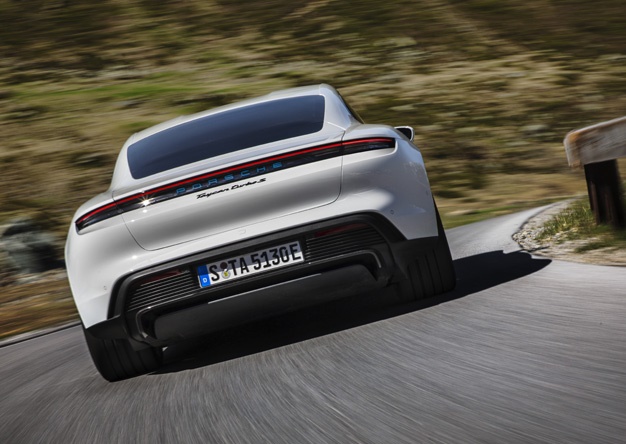 Even though there's no rumbling roar of the exhaust, the sheer power of the Taycan makes you forget that there's no sonorous melody strumming your heart. And, it doesn't even matter one bit.

My driving partner was first up to give it a go. We anticipated it, but we were not a damn ready for what was about to happen.

Up until that moment, we had toggled with the driving mode selector on the steering wheel, cruised silently, and also pushed the Taycan through its paces on wide open, quiet stretches of roads leading to nowhere around the Swartland district. Impressed is an understatement, and the more we drove, the more we were in awe at the technology and innovation of this vehicle.

We find a long glorious piece of asphalt that looked like it could lead to the heavens.

I knew it was coming, but nothing, absolutely nothing, could have prepared my driving partner, Jeanette Kok-Kritzinger, and I, for that first launch control. The function is self-explanatory and is found in most high-performance vehicles; usually ones with brute power and thundering exhaust notes. To initiate, you would put the vehicle in its most potent driving mode, like Sport Plus in the Taycan, while the car is stationary. Then, plant your left foot on the brake peddle with all your might, and stick your right foot through the floor on the throttle - no, not literally - once you're ready, you lift your foot off the brake as quick as a fiddle and keep your right foot on the 'gas' (read: accelerator).

I saw her tighten her grip on the steering wheel with both hands, so I made sure I rested my head right against the car seat, and... "JEANETTE!!!" I screamed, both out of complete fear and excitement all at the same time. I screamed because it felt like an out-of-body experience, and like we were being snatched from this earth and catapulted into another universe. It was like blasting into a warp zone. Yet, it was the most exhilarating moment of my life. And then came the uncontrollable, hysterical laughter for a solid 10 minutes. We laughed so hard, we cried, and every time we tried to speak, we'd just start laughing all over again.

And just in case you've forgotten by now, this car is 100% pure electric.

It was magnificent, but also comical. I never thought an electric vehicle could make the blood in my petrol veins sing another tune. While I've always been a hardcore hip-hop fan, the Taycan left me singing Taylor Swift's 'I knew you were trouble' all the way home.

Stay tuned to Wheels24, and read all about the Porsche Taycan throughout the week as Janine shares more interesting information about the electric sportscar. We live in a world where facts and fiction get blurred
In times of uncertainty you need journalism you can trust. For 14 free days, you can have access to a world of in-depth analyses, investigative journalism, top opinions and a range of features. Journalism strengthens democracy. Invest in the future today. Thereafter you will be billed R75 per month. You can cancel anytime and if you cancel within 14 days you won't be billed.
Subscribe to News24
Related Links
WATCH | Here’s why the all-electric Porsche Taycan could be the most important new car in 2020
This is how much Porsche's Taycan will cost in SA
Next on Life
2022 Ford Ranger: These are the new bakkie's tech specs you need to know about