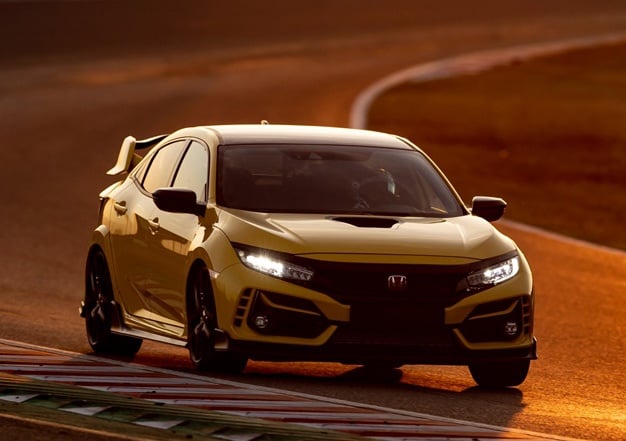 • Honda chose Suzaka to do its lap record of the new Civic Type R.

• The Type R was a second faster than the Ferrari F40.

• Ayrton Senna helped Honda point out flaws on the NSX at Suzuka in 1989.

Nürburgring lap records are a constant source of controversy.

The difference in climatic conditions that occur around the 20.8km German circuit makes comparison fraught with difficulty. Not to mention the issue of using control tyres. Or brake fluid. All these variables make Nürburgring lap records contentious.

Honda's latest production car lap record is not one of Nürburgring acclaim. The Japanese company chose to keep it local, journeying to one of the world's great racing circuits outside of Europe: at Suzuka. For decades Suzuka has been the venue of Japan's GP. The circuit is deeply significant to Honda. It is here where some of the most famous victories were attained with its nearly unbeatable McLaren-Honda F1 cars in the period 1988-1991.

To prove how capable its latest 228kW Civic Type R is, Honda set the fastest time yet for a front-wheel drive car, around Suzuka. When the timing system was triggered and data corrected, the Civic Type R had lapped Suzuka's 5.8km length in only 2:23.993.

As with all lap times, the comparison is where the value lies. Honda's 2020 Civic Type R managed to lap the technically challenging Suzuka circuit a second faster than one of Ferrari's greatest supercars, the F40.

Despite the F40 being lighter and 124kW more powerful, the Type R's lap time illustrates exactly how capable and advanced a modern family performance car has become.

Why Suzuka is so special to Honda

Beyond the clever marketing that Civic Type R's new lap record will afford Honda, there is something more symbolic at play. At the height of its F1 motorsport success, Honda had a tremendous relationship with Ayrton Senna.

The Brazilian was viewed in awe by Japanese engineers and assisted in the development of Honda's NSX sportscar. It was at Suzuka, in February of 1989, where Senna would showcase his immense driving talent - and find faults in the balance of Honda's NSX.

Few questioned the excellence of Honda's NSX platform, but Senna made it even better after requesting less brake-dive and cornering roll. Senna's input guided Honda's engineers to improve the NSX's suspension set-up. They eventually managed to make the car's structure 50% more rigid, before it went into production, after Senna's original 1989 test drive at Suzuka.

The 1992 YouTube NSX-R driving video of Senna, lapping Suzuka in casual loafers, without a helmet, remains an iconic testament to sheer driving talent. It must also have been a deeply satisfying moment for him, after testing the original road car prototype a few years earlier - and experiencing how truthfully engineers had translated his inputs.

We live in a world where facts and fiction get blurred
In times of uncertainty you need journalism you can trust. For 14 free days, you can have access to a world of in-depth analyses, investigative journalism, top opinions and a range of features. Journalism strengthens democracy. Invest in the future today. Thereafter you will be billed R75 per month. You can cancel anytime and if you cancel within 14 days you won't be billed.
Subscribe to News24
Related Links
The best Honda Civic yet? Meet the Limited Edition Type R Soichiro would approve
WATCH | This collection of rare VHS footage shows Ayrton Senna in something other than a Formula...
Next on Life
FIRST DRIVE | Is this the BMW X1 we always wanted? We drive the xDrive28i in California