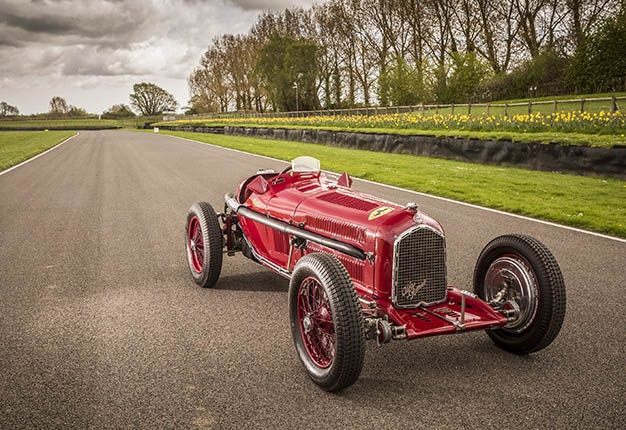 When the hammer fell on the ex-Richard Shuttleworth Alfa Romeo P3 Tipo B Monoposto, it was sold to an American collector with an invitation to return the car to South Africa where it raced 82 years ago.

The Grand Prix Alfa Romeo raced in the 1936 South African Grand Prix and is confirmed to return to East London to participate in the Historic Grand Prix Festival in November.

The historic Alfa Romeo was auctioned at the Goodwood Festival of Speed in July by Bonhams, selling to an American collector who is excited to reunite the car with some of the exact machinery it raced against in 1936.

READ: South African GP Alfa Romeo P3 Tipo B Monoposto to go under the hammer at Goodwood Festival of Speed

An addition to an incredible collection of prominent machinery, the single-seater Alfa will be raced in East London on 25 November before hitting the South African streets to tour from East London to Cape Town because it is uniquely road registered, after being converted into a two-seater road car in the 1940s. The SA Historic Grand Prix Festival culminates in a Garden Party at the luxury Val de Vie Estate in the Western Cape on 1 and 2 December where this great Alfa will be displayed alongside the other Grand Prix cars and over 150 other spectacular cars.

The sights and sounds of racing

Spectators will have the opportunity to get up close to these exotic machines and be able to hear and smell the spectacle of them running on a display circuit around the estate.

Alfa Romeo built just 12 of these fabled grand-prix machines in 1934. This particular car was a thirteenth car built by Scuderia Ferrari and supplied to Richard Shuttleworth for the 1935 racing season.

When the Alfa arrived in East London in 1936, it was about as exotic as they came: a straight eight-cylinder twin overhead cam, twin supercharged engine, split differentials at the back, and single seat configuration.

And weighing just 750kg, it was fast. The state-of-the-art car became the grand prix standard and they consequently remain in huge demand by collectors and enthusiasts as a fast, reliable and imminently usable pre-war machine in the world’s best historic events.

While the Alfa somersaulted spectacularly out of the 1936 South African Grand Prix, seriously injuring Shuttleworth, the distinctive roar of its straight-eight will be a mystical experience alongside the East London coast on parts of the very tarmac it occupied 82 years ago.

And while there won’t be time for its new owner to fit its optional two-seater body for the tour down to Val de Vie, the Alfa should be a thrilling driving experience in a single-seater form on some of South Africa’s most spectacular roads and scenery.

Get your tickets early for this momentous event and experience some of the rarest and exciting racing cars in the world first hand. Tickets are available at www.sahistoricgp.com and you can follow the event on Facebook – SA Historic Grand Prix Festival.

We live in a world where facts and fiction get blurred
In times of uncertainty you need journalism you can trust. For only R75 per month, you have access to a world of in-depth analyses, investigative journalism, top opinions and a range of features. Journalism strengthens democracy. Invest in the future today.
Subscribe to News24
Related Links
South African GP Alfa Romeo P3 Tipo B Monoposto to go under the hammer at Goodwood Festival of Speed
Ford Capri, Alfa Romeo GTV - dream cars from the past: The good, the bad, and the ugly in SA
Next on Wheels24
Subaru's forgotten supercharged hot hatch