Fire and silk: The tale of an ultra-special Mercedes-Benz E-Class

Mercedes-Benz recently celebrated the digital world premiere of the E-Class Cabriolet and Coupe, following the global reveal in March this year of the comprehensively updated E-Class sedan and estate models.

With over 14 million sedans and estates delivered since 1946, the E-Class is the best-selling model series in the history of Mercedes-Benz, and is perceived by many as the "heart of the brand".

The tenth-generation of the E-Class set new trends in 2016 with a clean yet appealing design, a high-quality interior, and a wealth of innovations, including new driving assistance systems.

This emotionally appealing, yet intelligent combination has proven hugely successful with more than 1.2 million current-generation E-Class sedans and estates finding buyers up till now. E-Class customers are among the most loyal fans of the Mercedes star, with eight out of ten E-Class sedan owners remaining loyal to the brand when buying their next vehicle.

Have you ever owned an older-generation Mercedes-Benz E-Class, or perhaps a 500 E? Please email us your stories and images. The 123 Series of 1976 also saw produced of an estate version, and the 124 Series of the years 1984 to 1995 was also available as a four-seater cabriolet, and first gained the E-Class name in mid-1993. This model series also saw the birth of probably the most sought after and delectable variant of the E-Class – the Mercedes-Benz 500 E.

In October 1990, almost thirty years ago, the understated, yet immensely powerful, top-of-the-range Mercedes-Benz 500 E was one of the stars of the Paris Motor Show. While very discreet on the outside, this business sedan turned into a super sports car on the road – and Mercedes-Benz underlined these extreme characteristics in the 500 E's sales brochure, entitled "Fire and Silk".

Its modest appearance, with a subtly muscular body including lightly bulged wheel arches, a slightly lower body, and a modified front apron with inset fog lights to differentiate it from the other 124 Series models, combined with a hugely potent, high-torque 5.0-litre V8 engine producing 240kW, made this executive sedan something of a "sleeper" – a real wolf in sheep's clothing. The V8 engine and its four-speed automatic transmission were taken from the 500 SL. Still, the 500 E incorporated several other new features: it was the first car to feature the "standard deck" engine – with the same crankcase used for both the 4.2 and the 5.0-litre units. This meant the engine nestled 16.5 mm lower in the 500 E than in the R129 Series SL.

The 500 E can sprint from 0 to 100 km/h in just 6.1 seconds while its top speed is electronically limited to 250 km/h – performance figures worthy of a sports car, more so back in 1990… It is this combination of ingredients and characteristics that creates the allure the 500 E has exuded since its first appearance thirty years ago.

Indeed, the powerful sedan is now one of the most highly sought-after young classic cars bearing the three-pointed star. (Interestingly, one of the interior styles offered in the latest edition of the E-Class is called Modern Classic; a further development of the classic display style in an elegant and light material mix.) Incidentally, the 500 E was created in close cooperation with Porsche. There were two reasons for this. First, the production order came as a timely stroke of fortune during a difficult period for the sports car manufacturer and secondly, the relatively small volume was an ideal match for Porsche's manufacturing processes, meaning that production of the 500 E was in good hands.

During production, Mercedes-Benz delivered parts to the "Reutter-Bau" plant of Porsche in Zuffenhausen where the W124 chassis were strengthened and hand-assembled. It was then transported to the Mercedes-Benz Sindelfingen assembly plant to be painted and then back to Porsche's "Rössle-Bau" plant to fit the engine and do the final assembly. For final inspection and delivery, the vehicles again went back to Sindelfingen. The entire process took 18 days per car. 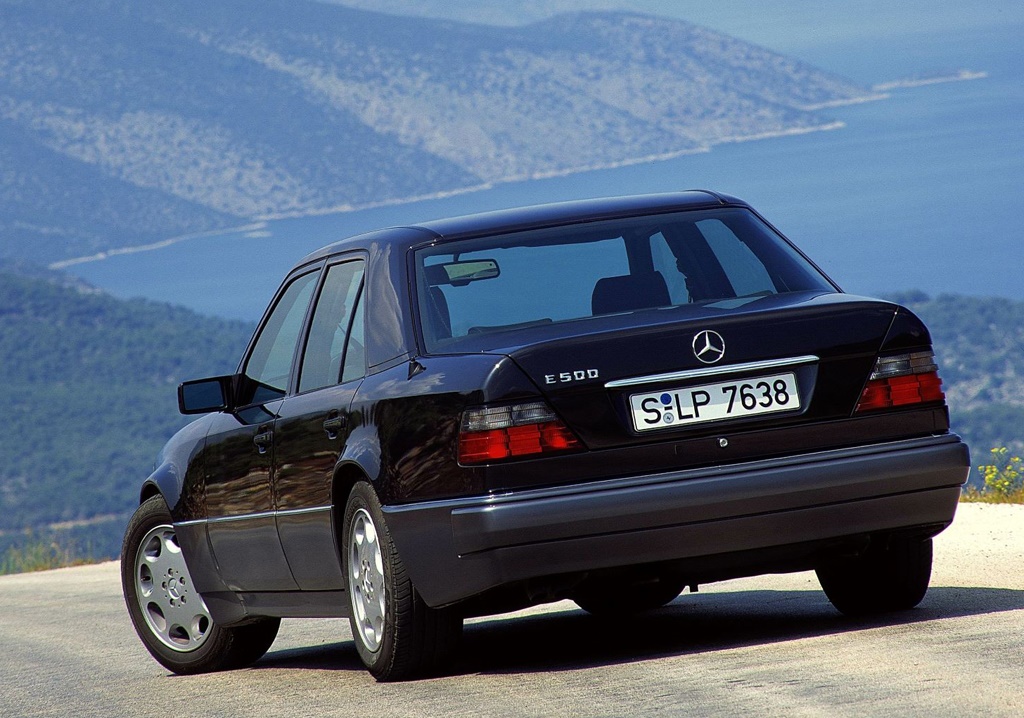 The first specimens of this top model came off the assembly line at the end of 1990, and if they were registered in the same year, these cars could now benefit from the coveted H plate, for a "historic" car, in Germany from this year.

From 1993, the model was designated as the E 500 – in line with the new naming protocol of Mercedes-Benz – and benefitted from the final facelift of the W124 model series, including a revised radiator grille, framed by and integrated into the bonnet, a redesign rear end with wider radius edges to the boot lid and wings and modifications around the number plate.

With the 210 series ready and waiting in the wings, production of the E 500 was discontinued in April 1995 – with quite a few customers regretting not having bought this special E-Class model.

Demand for a sports saloon of this kind remains to this day, and since the 500 E a particularly powerful model – mostly developed in collaboration with AMG, which became the subsidiary company Mercedes-AMG GmbH in early 1999 – has been part and parcel of nearly all Mercedes-Benz models. The Frankfurt Motor Show in September 1995 thus marked the debut of the E50 AMG as the successor to the 500 E.

Very few well-preserved 500 E/E 500 models remain today. But those examples of this exceptional and powerful sedan represent a significant investment. They now are sought-after collector's items with good examples fetching up to more than a million Rand.

We live in a world where facts and fiction get blurred
In times of uncertainty you need journalism you can trust. For only R75 per month, you have access to a world of in-depth analyses, investigative journalism, top opinions and a range of features. Journalism strengthens democracy. Invest in the future today.
Subscribe to News24
Related Links
New arrivals - Mercedes-Benz reveals SA-bound E-Class coupé and cabriolet
Why these vintage and modern Mercs could offer an unusal investment for 'solid returns’
Next on Wheels24
Reader's Ride | This ultra-rare Mazda RX-7 is what rotary-powered dreams are made of