South African motoring enthusiasts are in mourning as one of the country's legends Basil Green, died on Monday, 27 June, his family has confirmed. In 2019, the iconic Capri Perana turned fifty, and Green was also inducted into the Hall of Fame. We've republished our article in tribute to this great man.

Fifty years ago, the iconic Capri Perana, one of the legends in South Africa's motoring heritage, was conceived by master engineer and car builder Basil Green.

Fittingly, Green, also called "Mr Perana", was inducted to the South African Hall of Fame earlier in 2019. The Hall of Fame honours outstanding achievements amongst South Africans from all walks of life and inductees include Nelson Mandela, golfer Gary Player and Olympian Wayde van Niekerk.

Several luminaries from the racing and automotive industry have since joined these icons, including Ian Scheckter, Sarel van der Merwe, Rory Byrne and Wayne Taylor. 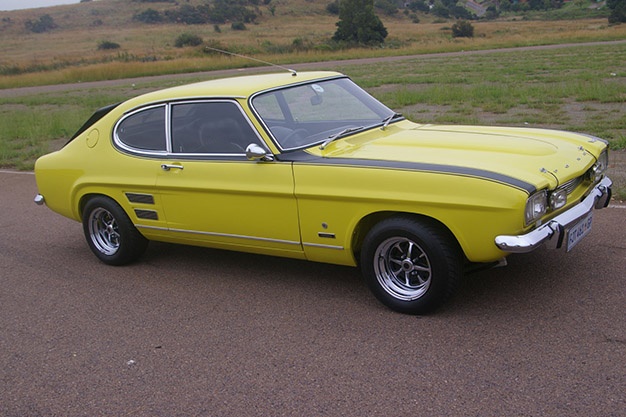 The story of the most revered Perana model started in early 1969 when Ford unveiled its Capri model at the Brussels Motor Show. The Capri (named Colt during its development stage, but Ford could not use the name as it was trademarked by Mitsubishi), was intended to be a European pony car – reproducing in Europe the success of the Mustang in the United States.

The fastback coupé, mechanically based on the Cortina, was available with a variety of engines, and South African models initially received the Kent 1.6 and Essex V4 engines. This gave Basil Green Motors, established in 1967 in Edenvale, Johannesburg, and already renowned for its Cortina and Escort Perana performance models, the opportunity to mount an Essex V6 in the sporty coupé – and the Capri Perana was born.

Only about 20 units of this model, with a top speed of 186km/h, was built by Basil Green Motors – making it the rarest of all Perana models – before Ford of South Africa from 1970 made the Essex V6 available in the standard Capri. Green then made an audacious move by shoehorning the 5.0-litre Windsor V8 from the Ford Mustang into the Capri.

The Capri Perana V8 is unique as it was the only V8 Capri ever sanctioned by Ford. It was available from any South African Ford dealer with a full warranty. Based on the Capri 3000 XL built in Ford’s Port Elizabeth it was sent to Basil Green Motors without engine and transmission.

The power from the V8 engine was transferred to the rear wheels through run a close ratio 4-speed ‘top loader’ or three-speed C4 automatic transmission and a custom limited slip rear axle from the Australian Ford Falcon.

This gave the V8 Perana sledgehammer-like performance; It managed the 0-100km/h sprint in just 6.7 seconds, ran a quarter mile in the mid-14s and reached a top speed of 228km/h.

The Perana V8 was also only 9kg heavier than the standard 3000 XL, made possible by using an aluminium inlet manifold and bell housing. The V8 also squatted 40 mm lower and have an uprated Macpherson strut suspension up front. Wide Rostyle steel wheels finished in chrome were fitted as standard.

Officially the Capri Perana was only sold in "Bright Yellow" and "Piri Piri Red", but some cars were painted in different colours, such as gold and mustard, and “Mr Perana’s” own Capri was green, obviously.

It also hugely upset the apple cart in local motorsport. In signature Gunston livery, the Capri Perana of Bobby Olthoff dominated track racing in 1970, smashing the outright saloon car lap record at every circuit it raced, winning the 1970 South African championship and, in a different format, the 1971 and 1872 championships as well. In total, about 550 Capris were converted by Basil Green Motors by the time Ford ceased local production of the Capri Mk I in 1973. No Mk II and Mk III Capris were exported to or built in South Africa.

Dubbed "the Carroll Shelby of the bushveld" Basil Green is an engineering visionary worthy of his Hall of Fame induction. His creations, specifically the Capri Perana, will leave a lasting legacy and forms an indelible part of our motoring heritage.

We live in a world where facts and fiction get blurred
In times of uncertainty you need journalism you can trust. For 14 free days, you can have access to a world of in-depth analyses, investigative journalism, top opinions and a range of features. Journalism strengthens democracy. Invest in the future today. Thereafter you will be billed R75 per month. You can cancel anytime and if you cancel within 14 days you won't be billed.
Subscribe to News24
Related Links
Here's how this veteran petrolhead became a Ford fan
Heritage Day | These are SA’s locally built motoring legends
Next on Wheels24
OPINION | How the memory of the Ford Sierra XR8 still brings a quiver of old-fashioned fear