Kempton park - It took him more than 14 months, sometimes facing seemingly insurmountable challenges, to build a completely unique replica car, but for Johan Ackermann the completion of this project - nearly three years ago - was a life-long dream come true.

And now the resident of Gauteng’s hard work and dedication to bring this one-of-a-kind vehicle to life has been recognised – by none other than the original creator of the Le Mans-winning race car.

Ackermann, who used to be a test driver for a German car manufacturer and also a mechanic responsible for the preparation of legendary race driver Tony Viana’s BMW in 1988 and 1989, always wanted to build his own car, but it had to be different and unique.

It wasn’t until he picked the Sauber-Mercedes C9, the car that finished first and second at the 1989 24 Hours of Le Mans, for an online gaming competition that he knew: This is the car he wanted to build…

He carried out his research and sourced the correct dimensions and specifications to build the chassis – designed so that modern Mercedes-Benz parts would fit onto it. The tricky part was to manufacture fibreglass body parts to reflect the original C9’s shape. Ackermann used a 1:32 scale C9 model and enlarged the design. Cardboard templates were then used to transfer the full scale body parts onto the chassis.

For the suspension he used customised components from the W202 C-Class and fitted Eibach springs and Bilstein shock absorbers but the engine proved a challenge, since he didn’t have access to a V8 as used in the original racer.

Still, Ackerman wanted it to be as closely linked to the race car’s engine as possible. Eventually the M112 3.2-litre V6 found in the W220 S-Class was used. The standard engine’s 165kW was increased to the 250kW by adding two turbochargers with intercoolers and blow-off valves – which in effect is close to the same layout as in the original C9. 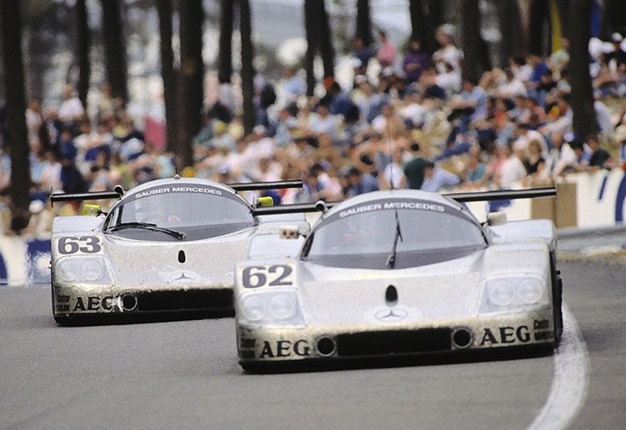 The biturbo-V6 drives the rear wheels through a W124’s five-speed manual gearbox, the fuel tank comes from a SLK, and the front brakes and dark alloy wheels were taken from a W221 S600.

READ: 10 essential checks when buying a classic car in SA

While he admits the height and design of the cockpit canopy isn’t as low as the race car’s, Ackermann proudly states all measurements are within 5mm of the original C9’s dimensions.

The C9 Tribute, as Johan calls it, has turned heads in South Africa for the past three years, and some time in 2015 he was introduced to a Swiss gentleman who said he knew Peter Sauber, creator of the C9 and owner of the Sauber F1 team.

Ackermann presented him with a book on the C9 Tribute project, and he promised to show it to Sauber when he visited Switzerland again. “He did, and on his recent return I collected the book from him.

“I asked him what Sauber’s reaction was, and apparently he was skeptical initially and didn’t show much interest. However, my friend asked him to read it and then decide…”

“Well, he wrote me a short letter:

Dear Johan
I am deeply impressed by your enthusiasm, as well as your effort and dedication needed to turn your dream into reality.
Congratulations on this amazing outcome!
Safe travels and endless enjoyable kilometres with your C9 Tribute.
Best wishes,
Peter Sauber

“After reading it I felt honoured and really proud, more so since he wasn’t really positive about the project to start with.

It is fantastic to be recognised like this by the originator of the car that spearheaded the return of Mercedes-Benz to Le Mans. It has made the whole undertaking so much more worthwhile,” Ackermann said.

The original letter from Peter Sauber: We live in a world where facts and fiction get blurred
In times of uncertainty you need journalism you can trust. For 14 free days, you can have access to a world of in-depth analyses, investigative journalism, top opinions and a range of features. Journalism strengthens democracy. Invest in the future today. Thereafter you will be billed R75 per month. You can cancel anytime and if you cancel within 14 days you won't be billed.
Subscribe to News24
Related Links
10 essential checks when buying a classic car in SA
R100k reward offered for missing race car in SA
Next on Wheels24
PHOTOS | How this 86-year-old built his own SA classic car from scratch