The epitome of classics: Mercedes-Benz's S-Class '6.9', the original Q-car limousine With teaser images and prototype spy shots of the next-generation Mercedes-Benz S-Class already flooding websites and online car portals, a nostalgic look at the predecessor, that, 45 years ago - long before the AMG era - permanently cemented its prodigious power image, is perhaps appropriate.

The new S-Class, expected to be unveiled in September, is based on Mercedes' new MRA rear-wheel-drive platform and will be available with either mild-hybrid or plug-in hybrid powertrains.

Engines will either be a 3.0-litre inline-6 or 4.0-litre V8. Combined with electric motors, total power output will be over 300kW and approaching 400kW.

Should Mercedes-Benz hybridise its next generation S-Class? Email us your opinion. Back in 1975, Stuttgart already made a clear commitment to power with the introduction of the top-of-the-line W116 model, the 450 SEL 6.9, generally referred to as the '6.9' to distinguish it from the regular 450 SEL. Equipped with the M100 V8 engine, the 6.9 featured the largest V8 of any non-American production car post World War 2.

The evolution of the SEL started a couple of years earlier when legendary Mercedes-Benz engineer, Eric Waxenberger, decided to shoehorn the manufacturer's big and powerful 6.3-litre V8 into a W109-series 300SEL body. The normally conservative management of Mercedes-Benz liked it so much it was put into production, and at the time it was the world's fastest four-door sedan.

The success of the 300 SEL 6.3 paved the way for the 450 SEL, and the long-wheelbase 6.9-litre version - with a cast-iron V8 with aluminium cylinder head and single overhead camshafts - was to be introduced as the flagship of the range. However, it very nearly did not happen. In late 1973, the world was rocked by the Oil Crisis when the OPEC member states on the Arabian Peninsula limited crude oil production, and the price of petrol and diesel soared. As a result, fuel was rationed. And, more critically, the demand for big, powerful vehicles with high fuel consumption stagnated or declined.

During this critical phase for the automotive industry, the top management of Mercedes-Benz had to decide whether to continue with the introduction of the S-Class flagship, or not. However, with Mercedes-Benz able to increase sales figures during this time, they bravely decided to go ahead with the market launch of the 6.9, even though it was postponed by a few months.

READ: Impossible to imagine: Porsche built a Mercedes and an Audi, at the same time!

In the 450SEL 6.9, the cylinder bore of the Mercedes-Benz 600-borrowed eight-cylinder engine was increased from 103mm to 107mm, resulting in a displacement of 6 834cc. The engine, with Bosch K-Jetronic electro-mechanical injection and dry-sump lubrication, pushed out 210kW and maximum torque of 550Nm.

Interestingly, like the AMG V8 units of today, each engine was hand-built and, according to press material of the time, each was bench-tested for "265 minutes, 40min" under full load. A three-speed auto transmission with standard ZF limited-slip differential transmitted the power to the rear wheels, and test figures indicated a top speed of 237km/h and a 0-100km/h time of 7.8 seconds. This made the high-performance sedan one of the fastest vehicles at the time. But besides the discreet (and optional) 6.9 insignia on the boot lid, and marginally bigger wheels, one could not tell it apart from any other W116 S-Class. In this sense, it was the ultimate Q-car, a lavish limousine with supercar performance capabilities.

Yet, it was not just muscle without finesse. Mercedes-Benz introduced hydropneumatic self-levelling suspension in the 6.9, similar to the Citroën system, for more progressive, precise damping at any speed and later models were offered with electronically controlled anti-lock four-wheel disc brakes.

Its surprising agility (for a two-ton V8 monster) was attested to in the 1976 cult classic movie C'était un Rendez-Vous by French film director Claude Lelouch, depicting a high-speed run through Paris supposedly in a Ferrari 275 GTB. However, Lelouch later revealed he used a 450SEL 6.9, with the Ferrari engine sound dubbed in.

Interestingly, Lelouch and Ferrari last month attempted to recreate the magic of this epic drive in a short film called Le Grand Rendez-Vous with a Ferrari SF90 Stradale hybrid hypercar driven by Formula 1 driver Charles Leclerc on the streets of Monaco.

And then, of course, there was the 6.9's high-speed guest appearance in the 1988 film Ronin.  Like the exterior, the interior was understated, offering amenities such as air-conditioning, heat-insulating glass, central locking, cruise control, power windows, velour upholstery, and hand-adjustable side mirrors. Options were limited to an electric sunroof and a car phone. 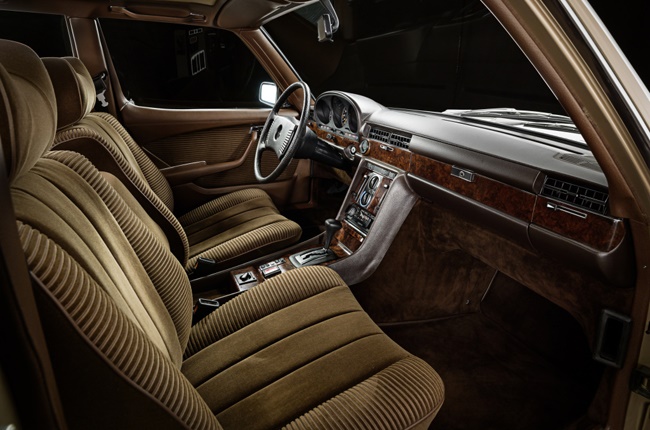 The specification of the 450 SEL 6.9 may pale against that of the current Mercedes-AMG S63L, but nearly five decades ago it was one of only a few production cars that could cruise along sedately at over 200km/h and rush from 0-100km/h in under eight seconds.

Its introduction during one of the most tumultuous times in the auto industry was praised by the media and described by the Swiss publication Automobil Revue as "not only testimony to the optimism for the future expressed by its creators, but also of their courage to stand by their convictions." Auto Motor und Sport simply called it "The world's best car."

This cocktail of high-level luxury, refinement and sports car performance, combined with very low production numbers (only 7 380 were built) has made the 450 SEL 6.9 a brand icon and a sought-after classic. Mercedes-Benz 450 SEL 6.9. (Mercedes-Benz)
We live in a world where facts and fiction get blurred
In times of uncertainty you need journalism you can trust. For 14 free days, you can have access to a world of in-depth analyses, investigative journalism, top opinions and a range of features. Journalism strengthens democracy. Invest in the future today. Thereafter you will be billed R75 per month. You can cancel anytime and if you cancel within 14 days you won't be billed.
Subscribe to News24
Related Links
Impossible to imagine: Porsche built a Mercedes and an Audi, at the same time!
Evo and Elektro: The Mercedes 'Baby-Benz' boomers
Next on Life
Judgement Day: What it takes to be a classic car judge at the popular Concours South Africa 2022