Can you beLeaf it? Nissan's first EV turns 10 • Nissan's Leaf was launched in 2010 and was one of the first mass-produced electric vehicles.

• The first-generation Leaf went on sale in South Africa.

• Since its debut 10 years ago, it has added a second generation in 2017 with more power and increased range.

10 years ago Nissan launched its rather awkward looking Leaf. Not only did it have a weird name, but it was unlike almost all cars on the road: it didn't have an engine. Instead it was powered by a battery that needed to be charged from a plug.

The world's first mass-market electric vehicle (EV) celebrates a decade of being around. Initially sales began in Japan, Europe and America but now the Leaf has blown to 59 markets across the world and more than half a million Leafs have been sold. Nissan says the Leaf's battery technology is helping power homes and businesses, while broader Nissan EV innovation is at the heart of vehicle-to-grid energy management services. Here are several key milestones the Leaf has achieved in its life cycle.

Nissan says its vision was to tackle urbanisation and industrial development by building a car that emits no carbon dioxide but is still loads of fun to drive.

Unique features allowed drivers to use their cellphones to check the car's battery level or manage air conditioning remotely. A 24 kilowatt-hour lithium-ion battery powered the first model. Fully charged, it had a range of 200 kilometres, according to the carmaker.

WATCH | A quick, quiet drive in the electric Nissan Leaf

Nissan worked with governments, municipalities and electric power companies to promote electric vehicles and develop an extensive charging infrastructure. When the Leaf was first arrived Japan had about 200 CHAdeMO1-standard quick chargers. Today, there are more than 30 000 of these chargers around the world.

2012: Game changer: A car that powers your home

Two years after introducing the Leaf, Nissan became the first company in the world to unveil a system that lets customers share power between their homes and cars. With Vehicle-to-Home (V2H) system, Leaf owners could store energy in their car battery and feed it back to their homes whenever they wanted. They could charge the car's battery when demand and rates were low and use it around the house during peak times.

At the same time, the Leaf began to make a difference during natural disasters that interrupt electricity supplies. It served as an emergency power supply on wheels, which could also store energy where needed. The company added improvements to the electric powertrain, which gave the car more power and extended its range to 228km.  The volume was reduced by 30% and mass by 10%. Reduced power consumption also enabled new perks, like heated seats and steering wheel.

Battery improvements began to accelerate. The Leaf got a 30kWh battery and a range of 280km. Even with the added capacity, the new battery could be charged to 80% in the same time it took to charge its predecessor. In 2017, the second-generation Leaf made its debut and introduced technologies like the e-Pedal for one-pedal driving and ProPILOT advanced driver assistance.

2018: Beyond mobility: Nissan Energy offers new ways to use the LEAF

Through smart storage and charging, the car could better share energy with a home or a business. The Nissan Energy Home, a demonstration of Nissan Energy's work and ideas, was unveiled at the Nissan Global Headquarters Gallery in Yokohama. 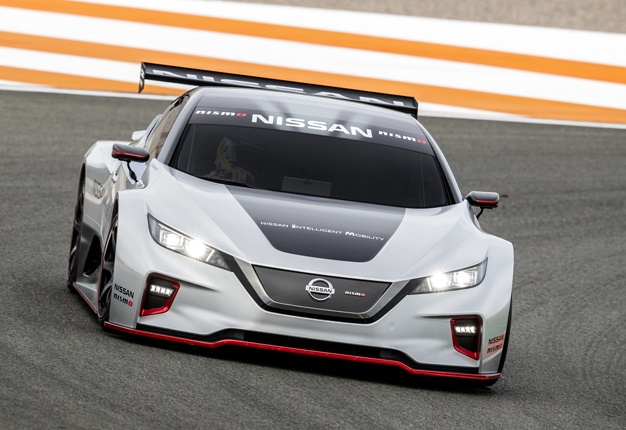 Following a study based on the original Leaf, and to show how much untapped potential lay in electrically powered cars, Nissan created the Leaf Nismo RC (Racing Competition). The first-generation Nismo RC was built in 2011 with the same battery, motor and inverter used in Leaf production cars. They were installed in the center of the vehicle to create a rear-wheel-drive system.

The second-generation Nismo RC, came in 2018. It was revamped and given twin motors, four-wheel drive and an aggressively-styled body. The lithium-ion battery and inverter used technologies from the second-generation Leaf, with the motor producing 240kW of power and 640Nm of torque.

A new electric powertrain gave the Leaf e+ a more powerful motor and extended range. Its 62kWh battery had 55% more capacity. This change pushed the car's range to 458km. We live in a world where facts and fiction get blurred
In times of uncertainty you need journalism you can trust. For 14 free days, you can have access to a world of in-depth analyses, investigative journalism, top opinions and a range of features. Journalism strengthens democracy. Invest in the future today. Thereafter you will be billed R75 per month. You can cancel anytime and if you cancel within 14 days you won't be billed.
Subscribe to News24
Related Links
SEE | A decade of the Nissan Leaf
What an achievement! Nissan celebrates production of its 500 000th electric Leaf
Next on Life
A bulletproof EV? This electric car is the first Jaguar I-Pace to get bespoke armour treatment