Electric vehicles in SA: Uptake of EVs slow but steady Cape Town - Lightstone, one of South Africa’s leading analytics and data companies today, reveals that since the inception of electrically powered vehicles (EV) in South Africa a total of 375 have been sold.

The idea of owning a re-chargeable lithium battery-powered vehicle may seem inconvenient but with many office parks, shopping centre parking lots and service stations starting to include EV recharging zones, owning an electric car could be more practical than you think.

What about charging stations?

Charging facilities are available in each province with Gauteng as the front runner with more than 90 stations.

Charging at home proves to be most convenient, however you will need to call on a qualified electrician to investigate your electrical wiring and ensure your home is equipped with three-phase power distribution.

What do you think of electric vehicles in South Africa? Email us
South Africa is by no means an early adopter with Lightstone data  demonstrating that 0.2% of the vehicles being EVs as opposed to Norway, who is currently the world leader with 6.6% (135 000 registered EVs) of vehicles on the road being electric powered vehicles*.

Optimal Energy, Nissan and BMW are the first manufacturers to introduce electric vehicles in South Africa with the Leaf in 2013 and the i3 in 2015 respectively.

The sudden surge in sales of the Leaf in 2015 can be attributed to the launch of the BMW i3 creating renewed interest in electric powered vehicles.

The Joule from Optimal Energy was South Africa's own locally produced electric vehicle but never formally entered the local market. The Joule project started in 2005 and ended in 2012. 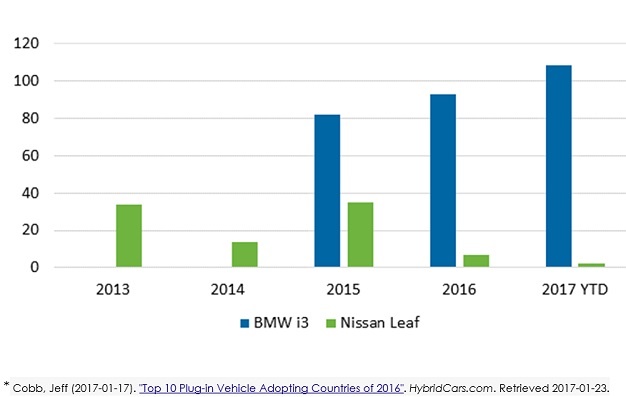 We live in a world where facts and fiction get blurred
In times of uncertainty you need journalism you can trust. For only R75 per month, you have access to a world of in-depth analyses, investigative journalism, top opinions and a range of features. Journalism strengthens democracy. Invest in the future today.
Subscribe to News24
Related Links
Detroit auto show: Ford to bring out 40 electric and hybrid cars by 2022
Toyota plans 10 purely electric vehicles by 2020s
Next on Wheels24
Order books now open: Volkswagen's electric ID.4 to go on sale in these markets