WATCH: Fly over traffic, cruise awesome roads - this awesome flying Audi-drone could be the future of travel 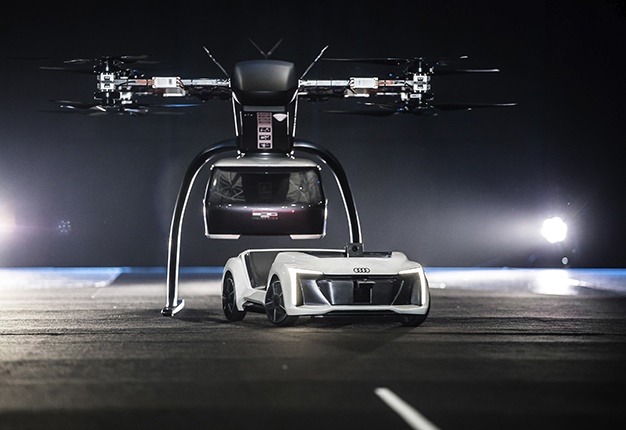 Audi, Airbus and Italdesign are testing a flying drone-car mashup which could provide a preview of future air taxis.

The 'Pop.Up Next' prototype was driven and hovered across an Amsterdam exhibition hall during Amsterdam Drone Week.

First, the drone flew across the hall and landed on a black parking spot. Then a small car drove itself underneath the drone and its passenger capsule was lifted up to latch onto the underside of the drone.

READ: Driverless hover-taxis to take off in Singapore

The revolutionary design is made up of three separate modules - a chassis with wheels, a two-seat capsule for passengers and a four-rotor drone.

Italdesign has flow a quarter-scale model of the Pop.Up Next modular air/ground vehicle, an electric eVTOL urban air mobility concept developed with Audi and Airbus.https://t.co/O22uNZR1Hy pic.twitter.com/AARJogRBfQ

Don't plan on hailing such an airborne ride any time soon; Airbus executive Jean Brice Demont estimates it will take more than a decade for a large-scale rollout of such a service.

'There are several steps to be taken before the Pop.Up Next, or a future iteration of the drone, is ready for commercial use. "For this, we need to tick a list of boxes - the vehicle is one, safety is the overarching one, infrastructure is one, acceptability is another one," said Airbus executive Jean Brice Dumont.

"I think it will take more than a decade until a real significant, massive deployment of an air taxi system' is ready."

Audi also revealed that it is conducting tests in Latin America where customers can book helicopter flights in combination with Audi transport services on the ground.

Dr Bernd Martens, president Italdesign, said: "Flying taxis are on the way. We at Audi are convinced of that.

"More and more people are moving to cities. And more and more people will be mobile thanks to automation. In future senior citizens, children, and people without a driver's license will want to use convenient robot taxis. If we succeed in making a smart allocation of traffic between roads and airspace, people and cities can benefit in equal measure."

We live in a world where facts and fiction get blurred
In times of uncertainty you need journalism you can trust. For only R75 per month, you have access to a world of in-depth analyses, investigative journalism, top opinions and a range of features. Journalism strengthens democracy. Invest in the future today.
Subscribe to News24
Next on Wheels24
This car will mine Bitcoin while you charge it - and it's ideal for short distance commuting