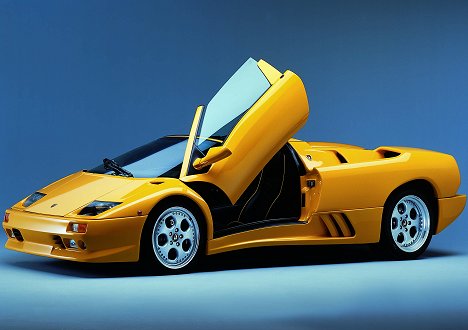 A 22-year-old man died in a car accident on Sunday in an Italian sports car worth millions of rands, which he had received as a gift from his parents only three weeks ago.

The accident took place at about 04:50 on Witkoppen Road, north of Johannesburg.

Three other people also died in the accident.

Brett Scott lost control of his red Lamborghini Diablo Roadster while going around a bend, presumably at high speed, crashed into another car and burnt to death in the car wreck.

Terry and Leslie Scott had to identify their son's burnt up body at the scene of the accident on Sunday morning.

Spokesperson of the Johannesburg metro police, Chief Superintendent Wayne Minnaar, said Brett of Boskruin, near Fourways in northern Johannesburg, lost control of the vehicle at the corner of Riverbend Road.

"The Lamborghini landed on the other side of the road where it collided with a black Volkswagen Golf belonging to Top Security.

The vehicles caught alight and both drivers burned to death in their cars," Minnaar said.

Albert Ncube, 42, was driving the Golf. His two passengers, a man and a woman whose names were not yet known, also died.

Spokesperson for Netcare911 Nick Dollman said that there had been a massive impact.

"The front wheel of the Golf was on the same level as the door handle and the car was more or less halved in size."

A spokesperson on behalf of the Scott family, Jean Bedou, said the family was very traumatised.

"Brett was loved by his friends and had so much life ahead of him. His family is completely stunned."

Brett was a financial advisor at a company in Cresta in Johannesburg.

Gary Ronald, spokesperson of the Automobile Association (AA), said that training played an important role when driving a super-powerful sports car like a Lamborghini.

"It's just stupid getting into a Lamborghini if you're not trained.

Leo Kok, editor of MotorBeeld, said the Diablo was not manufactured anymore but was still comparable with Lamborghini's latest models.

He added that the Diablo had a reputation as a "sometimes unpredictable" model.

It was not known which year's Brett's Diablo was but Kok estimated that the vehicle was more or less worth between R2.5m and R3.5m.

Lamborghini Diablo - heir to the legendary Miura and Countach

Unveiled at the 1999 Frankfurt Motor Show, the Diablo GT was the world's fastest production sports car, capable of a top speed of 338 km/h.

It used a 6.0-litre V12 and had a completely revamped body and chassis. All cars were fitted with a large rear spoiler. Only 83 units were built.

The most luxurious version of the Diablo was presented at the Geneva Motor Show in 2001 and boasted leather and carbon fibre in its interior, along with satellite navigation.

* Scott's family told News24 on Monday earlier reports that Scott had received the car as a gift from his parents were false. The family also denied reports that his parents had identified his body at the scene.

* Albert Ncube, a guard for Top Security, was killed along with two unknown people in his car while on routine patrol on Witkoppen Road. He leaves behind a wife and three kids, News24 has reported.

We live in a world where facts and fiction get blurred
In times of uncertainty you need journalism you can trust. For only R75 per month, you have access to a world of in-depth analyses, investigative journalism, top opinions and a range of features. Journalism strengthens democracy. Invest in the future today.
Subscribe to News24
Next on Wheels24
Dutch Dakar biker Edwin Straver still in critical condition