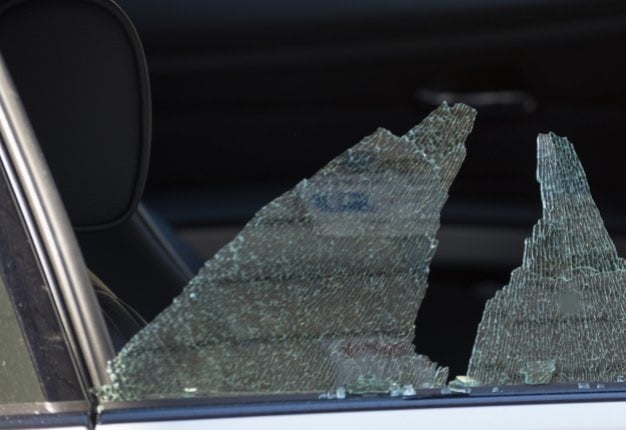 Cape Town - Being the victim of a heinous crime on our roads is something every motorist dreads and for some, it's a sad reality of commuting in South Africa.

The thought of having your belongings taken from your vehicle and not being able to do anything about it is an unpleasant thought.

A recent CCTV clip shows a driver becoming yet another victim of a common scourge on our roads - a smash ‘n grab.

In the video, two men can be seen walking along the side of the road (Jakes Gerwel Drive & Jakkelsvlei ave, Cape Town). The pair then move towards a car. Though the targeted vehicle is out of shot, one of the criminals can be seen smashing the car while the other is keeping an a look out.

It is unclear whether anything was taken from the vehicle or not though the pair can be seen fleeing the scene.

Fortunately, the assailant is tracked by the City of Cape Town’s Strategic Surveillance Unit and subsequently arrested.

Have you ever been a victim of smash 'n grab on South African roads? Tell us your story via email, Facebook and Twitter.

Johan Jonck from Arrive Alive says: “The threat of smash and grab is very real, yet too many motorists fail to remain alert to this threat. The first step to prevent becoming a victim is to take away the attraction by not having valuables visible or insight of the criminals.

“For too many of us the intersection and places on the road where we sit in congested traffic has become a place to update our social media or to do conversations. (Some motorists tend to forget that it is against the rules of the road to use a cellular device when the vehicle is running). This leaves the driver distracted and an easy target for these criminals."

READ: Roadblocks in Cape Town - 'He who controls the road controls crime'

Jonck adds: “There have been several incidents of motorists robbed of their cellular phones in traffic when they are talking on their phones with an open window - getting smashed against the head and phones swiftly taken away.”

Tips - How not to become a smash 'n grab victim:

1 Lock all your doors and close the windows when driving .
2 Avoid opening your windows or getting involved in discussions with street vendors or anyone handing out flyers.
3 Constantly be on the lookout for suspicious looking characters.
4 Always be conscious of your surroundings and remain alert when coming to an intersection or stopping your vehicle.
5 Be wary of people standing at intersections. They may be innocent but perpetrators mix with these people while waiting for an opportunity to pounce.
6 If you encounter obstacles such as rocks or tyres do not get out of your vehicle to remove them -immediately reverse and drive off in the opposite direction.
7 If it’s late at night, slow down well in advance so that the light changes green by the time you reach the intersection.
8 Leave a gap between you and the car in front of you to give you room to escape (i.e. drive away from the scene), if anything should happen.
9 Be especially wary whenever you see broken glass lying on the road. If the pieces of glass are still scattered across the road, chances are that a smash and grab occurred just recently.

10 Stow away your belongings such as shopping bags and laptops in the boot of your vehicle before leaving a parking area.

We live in a world where facts and fiction get blurred
In times of uncertainty you need journalism you can trust. For only R75 per month, you have access to a world of in-depth analyses, investigative journalism, top opinions and a range of features. Journalism strengthens democracy. Invest in the future today.
Subscribe to News24
Related Links
Top tips to prevent fuel-card fraud
Bizarre road-crime tactic in SA - a 'hijack doll'?
WATCH: SA driver's quick reactions beats hijacker
Next on Wheels24
Non-OEM workshops can now service your car, but customers must respect the rules