Bentayga, Cullinan, GLS AMG, Urus.… These are the rivals the Audi Q8 and BMW X7 must beat

I’m not really sure what we should call sports utility vehicles from the upper echelons of the financial sphere; Do we refer to them as uber-luxury SUVs? Premium luxury SUVs? Ooh, first-class SUVs?

Whatever tickles your fancy as to what they should be called, fact is these vehicles are designed and produced for the wealthy petrolheads. And in the market they play in, they are treated to a select number of SUVs to spend their substantial cash on.

But just a few notches down from these first-class SUVs are two new editions to the market. Both retail from under R2-million, both offer seating for seven, and both have all the features and accessories to make you feel like an Oligarch. BMW came to the ‘first-class party’ with its X7, and Audi with its new Q8.

Though they are substantially more affordable without sacrificing any of the luxury, are they justifiable rivals to the first-class boys?

Prior to both new cars arriving on the scene, the top vehicles in their segment from Audi and BMW’s respective stables were the Q7 and X5. These are SUVs that give nothing away in terms of appeal and class, but apparently weren't luxurious enough for the automakers. Not to be outdone, each manufacturer came forth with their own iteration of a first-class SUV and both offer the absolute best their respective manufacturers has to offer.

Interestingly, the X7 is so well-equipped that buyers only have a few optional extras to choose from. And when we say "a few", we mean it, as the options are incredibly sparse.

The X7 and Q8 both sport tons of presence on the road and they feature their respective manufacturers’ latest grille iterations. In the BMW’s case the kidney grilles are the largest ever to be used on a BMW product, while the Audi took a more subdued, yet effective, route. Both interiors are decked in leather and the product offerings are so comprehensive that one can’t help but feel as if you’re truly sitting in the lap of luxury.

It’s fair to say, then, that these two SUVs are ready to take on the establishment. Like many of the first-class SUVs in this list, the Bentayga is the first SUV to be produced by the famous British automaker. The market and buying trends forced Bentley (and Rolls-Royce, and Lamborghini) to tap into the lucrative SUV market.

Three engine types comprise the four-model Bentayga range. The entry to the range is a 4.0-litre V8 diesel engine pushing out a massive 320kW and (*gulp) 900Nm! Together with the V8 petrol, these models retail for just under R3.0-million, while the W12 (R3.98-million) and W12 Mulliner range (R5.79-million) take care of the rest. Interestingly, only five Mulliner were ever produced.

The Bentayga lost none of the traits and mystique Bentley is known for and does the SUV propel its occupants forward in the best comfort possible. Expect the best technology the automotive world has to offer, as well as an opulence of British flair.

READ: Here's why the Bentley Bentayga 4.0-litre V8 Diesel is a palace on wheels

What's it like to drive the new @BentleyMotors #bentayga V8? The monstrously powerful super-SUV is capable of hunting supercars while delivering an incredibly comfortable ride. Impeccable road manners, sumptuous interior, it's no mere V8-powered vehicle - it's an experience. @bentley_sa @wheels24_sa #cars #SUV

"POA: Price on Application" - If anything, that should serve as an idea as to just how exclusive the Rolls-Royce Cullinan is. Produced in limited numbers, the Cullinan is the first SUV to be produced by RR and it comes with all the opulence and luxury the Rolls-Royce brand is synonymous with. Weighing in at 2660kg the Cullinan is a heavy vehicle, but one can only assume that it has all the makings of Rolls’ infamous ride quality.

A 6.75-litre V12 petrol engine hides under the bonnet and produces 420kW and 850Nm; the latter available from as low as 1600rpm. But don’t think a big weight will halt proceedings, because the Cullinan is electronically limited to 250km/h. And it’s more than likely that you will not even feel that speed in the quietness of the Cullinan’s cabin.

Though we do not have prices for the vehicle locally, in the USA it retails for about R5.0-million. And if you thought of getting one in 2019? Sorry, but all eight South African allocations have been accounted for. Best get your order in for 2020, because it’s apparently selling like hotcakes! 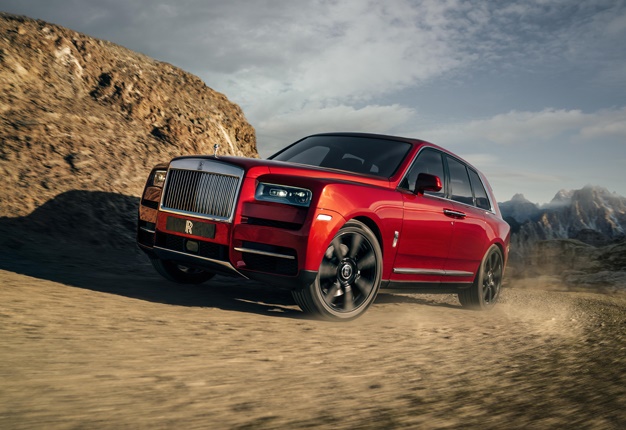 Perhaps the wild card in this list, the GLS 63 AMG is the oldest vehicle (launched in 2016) of the lot but is still as relevant as ever. Featuring a turbocharged 5.5-litre V8 petrol engine, 430kW and 760Nm are sent to all four wheels to give this big machine a 0-100km/h time of 4.6sec, and an electronically limited top speed of 250km/h.

Like the Q8 and X7, seven passengers can be seated in this mammoth SUV, and like the two new SUVs, the rear seats can be operated electronically. With these seats down, boot space is a useful 680L; 2300L when the second row of seats are also folded flat.

Despite its age the GLS 63 still offers a compliant ride quality. Right?! Well, that’s what you can expect from the Urus. It’s Lamborghini’s first array into the SUV market and already they’re not pondering about. The Urus is said to have retained all the dynamic traits of Lamborghini’s sports cars. Underlined by a top speed of 305km/h.

The one-model Urus range only has a turbocharged 4.0-litre V8 petrol engine to choose from, and power outputs are rated at 478kW and 850Nm.

Though a large SUV, it has a ground clearance of 158mm but can be raised to 248mm thanks to the adaptive air suspension. In an attempt to retain its sports car heritage, the Urus can be specified with four seats instead of five. It may come from a sports heritage, but the Urus does feature real-world technologies such as heated front seats, rain sensor wipers, and a tow bar (optional).

We live in a world where facts and fiction get blurred
In times of uncertainty you need journalism you can trust. For only R75 per month, you have access to a world of in-depth analyses, investigative journalism, top opinions and a range of features. Journalism strengthens democracy. Invest in the future today.
Subscribe to News24
Related Links
Driven: 2019 BMW X7 M50d
Audi's next-gen flagship SUV revealed - new Q8 debuts
Next on Wheels24
WATCH | Here's how a perfectly weighted trailer can save lives during the holidays