#FreedomDay: 27 reasons to be a proudly South African petrolhead What does Freedom Day mean to you? Local petrolheads have a lot to be proud of as we celebrate South Africa's rich motoring heritage.

To celebrate the 27th of April, an auspicious date for all South Africans, here are 27 automotive reasons to be patriotic:

2. The best bakkies in the world, are South African. As proven by the locally built Toyota Hilux victory at this year’s Dakar rally raid. 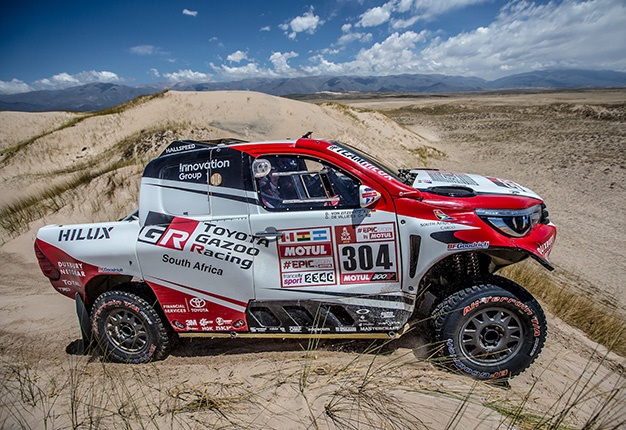 3. There has only been one African F1 world champion; East London born Jody Scheckter, driving for Ferrari, who won the 1979 title. 4. South Africa has the highest proportion of paved roads in Africa, which makes us the continent’s best location for driving.

5. We are a choice global venue for high-speed, warm weather, testing. As evident by the many disguised prototype vehicles you can spot roaming around the country during summer months.

6. To underscore our reputation as true African petrolheads, South Africa is the continent’s only market where a diverse array of supercars retail from official dealerships: Aston Martin, Lamborghini, Porsche, Ferrari and McLaren. 7. We house one of the world’s greatest car collections - the Franschhoek motor museum.

8. If you want to experience the solitude of some isolated gravel travel, try the 250km section between Calvinia and Ceres – officially the longest unpaved road in South Africa.

9. Rolls-Royce’s first SUV, the Cullinan, is named after South Africa’s most famous diamond. 10. VW has a huge "secret test" track here. Built in the Northern Cape, at undisclosed cost, it is located close to Pofadder and has two 4.5km straights.

11. South African vehicle manufacturing is so good, that our factories build for demanding export markets such as North America and Europe.

12. One of the fastest female drivers of all time, is a South African, Desiree Wilson. She remains the only woman to ever win an F1 race, at Brands Hatch in 1980, as part of the British Aurora F1 championship.

13 BMW has never built an M7, but we had one, sort of. When BMW South Africa put M1 engines in the original local production 745i limousines. 14 South African demand for performance cars remain unrivalled in Africa. We rank as a global top ten market for Mercedes-Benz AMG and BMW M-Division products.

15. One of the world’s most iconic coastal roads is South Africa. Clarence drive, between Gordon’s Bay and Rooiels is regarded as a global top ten must-drive route.

17. We can claim to spearhead the electric vehicle revolution, as Tesla’s founder, Elon Musk, was born and educated in South Africa. 18. Validating our claim to being excellent gravel and off-road drivers, is a Dakar rally driver’s title, which Giniel de Villiers won in 2009. 19. The man who revived an ailing Ferrari F1 team in the late 1990s, with his brilliant car design, was South Africa’s Rory Byrne. A picture of Gilbert Colyn, original owner of the first production GSM Dart, and his car in the late fifties.
Image: Ferdi de Vos

21. During the late 1990s, when five-valve heads were all the rage, Toyota South Africa created another Mzansi classic, in its Corolla RSi. Available nowhere else in the world.

22. One of the very best automotive designers of all time, is South African born and educated Gordon Murray. He penned F1 winning race cars and the McLaren F1 road car – regarded as the most iconic supercar of all time.

23 We have some really long sections of tar road. The N2 officially starts in Cape Town harbour and only ends in Ermelo, 2255km later.

25. One of the world’s most impressive motorsport dynasties is South African: the Scheckters. They have produced two F1 drivers (Jody and Ian). Jody’s sons, Toby and Tomas, were both internationally competitive drivers too.

26. Despite Eskom, we are leading Africa’s electric vehicle experiment. BMW and Jaguar retail battery powered vehicles here – and we have better recharging infrastructure than any other African country. 27. Our first democratic president, rode a Cressida to freedom. Illustrating that the Mzansi limousine philosophy, isn’t like most other countries.

We live in a world where facts and fiction get blurred
In times of uncertainty you need journalism you can trust. For only R75 per month, you have access to a world of in-depth analyses, investigative journalism, top opinions and a range of features. Journalism strengthens democracy. Invest in the future today.
Subscribe to News24
Related Links
Five crucial cars you can now buy in SA
These 5 bakkies are built in South Africa
Next on Wheels24
WATCH | Here's how a perfectly weighted trailer can save lives during the holidays