Here they are! One of these cars could win the 2020 South African Car of the Year!

Michelle Lewis
Share
The top 14 finalists for the 2020 AutoTrader South African Car of the Year have been announced – and it's a very interesting mix.

The most hotly contested category is Leisure, with four finalists: the Peugeot 5008, Toyota RAV4, Citroën C3 Aircross and Volkswagen T-Cross. There are two finalists in the Urban and Family categories. The Hyundai Atos and Suzuki Swift Sport are fighting it out for laurels in Urban while the Mazda3 and Toyota Corolla Hatch are going tooth and nail for top honours in the Family category. There is one finalist in each of the remaining three categories: the BMW 3 Series is the finalist in the Premium Car category, the Sports/Performance category has the Toyota GR Supra as its finalist, and the Ford Ranger Raptor is the sole finalist in the Lifestyle category.

A win in the prestigious 2020 AutoTrader South African Car of the Year competition will be significant for all of the brands involved in the contest.

For some of the finalists to win, it would really be one for the history books. Citroën, for instance, has yet to win South Africa’s most sought-after motoring accolade – and the timing could not be better, given the fact that the French manufacturer has just re-entered the South African market.

Suzuki did exceptionally well in the 2019 AutoTrader South African Car of the Year, with its Swift and Jimny winning their categories (Urban Compact and Lifestyle Utility respectively). However, it’s never notched up an overall win. An electric car and a bakkie have never won the competition either, meaning an I-PACE or Raptor victory will be truly momentous. 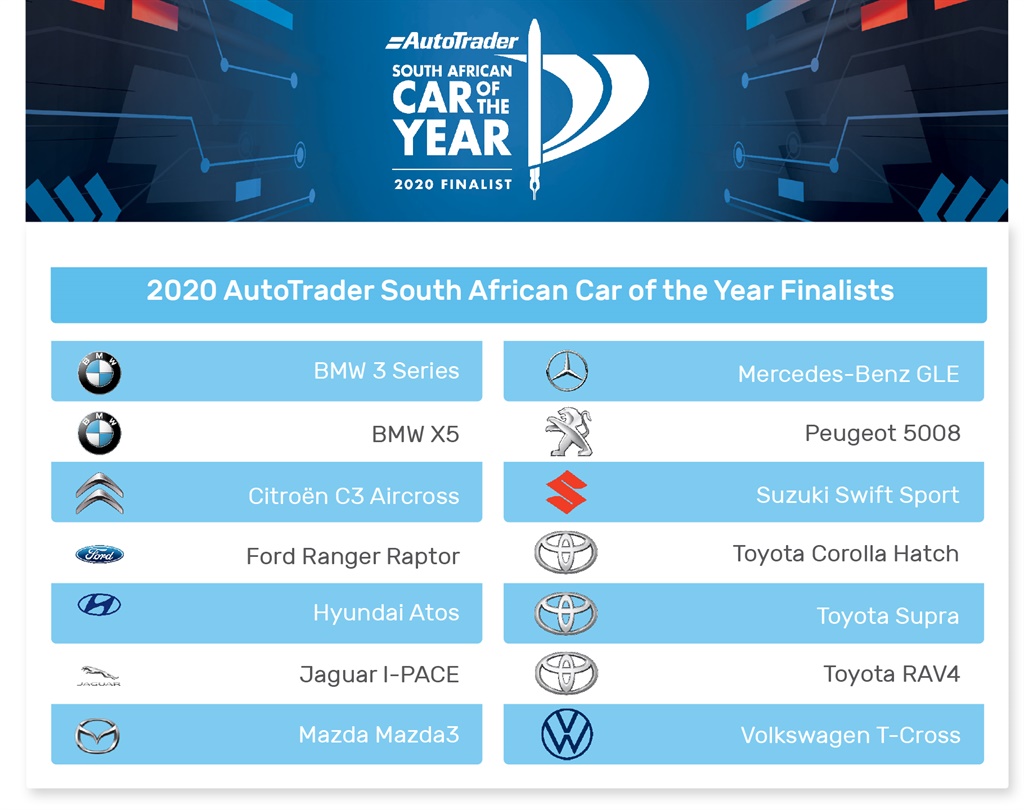 According to Vivien Natasen, chairman of the 2020 AutoTrader South African Car of the Year competition and honorary secretary of the South African Guild of Motoring Journalists (which organises the competition), there are some really strong contenders in this year's contest.

"Right now, there is no clear front-runner, it anyone's guess as to which car will win," he notes.AutoTrader CEO, George Mienie, reveals that members of the public would like to see a win by the Mazda3.

"It triumphed in the consumer vote, where we had hundreds of thousands of votes. The consumer votes act as the 28th Juror in the competition. Mazda’s last win was back in 2008, with the Mazda2 1.5 Individual – so it will be interesting to see if this Japanese company can take top honours,” he comments.

"Toyota is the only company with three finalists in the 2020 competition,” he points out.

The finalists were named at an event in Johannesburg on December 4.

The next step in the 2020 AutoTrader South African Car of the Year journey is the track and road testing of the finalists in March 2020 by 27 of South Africa’s top motoring journalists.

The category and overall winners will be announced at an event hosted by AutoTrader in April 2020.

2020 AutoTrader South African Car of the Year Finalists by Category

We live in a world where facts and fiction get blurred
In times of uncertainty you need journalism you can trust. For only R75 per month, you have access to a world of in-depth analyses, investigative journalism, top opinions and a range of features. Journalism strengthens democracy. Invest in the future today.
Subscribe to News24
Related Links
SEE | Here are all the 2020 SA Car of the Year semi-finalists
Mercedes-Benz A-Class wins 2019 South African Car of the Year
Next on Wheels24
Downsizing? Here are some incredible cars you could buy right now and feel great about